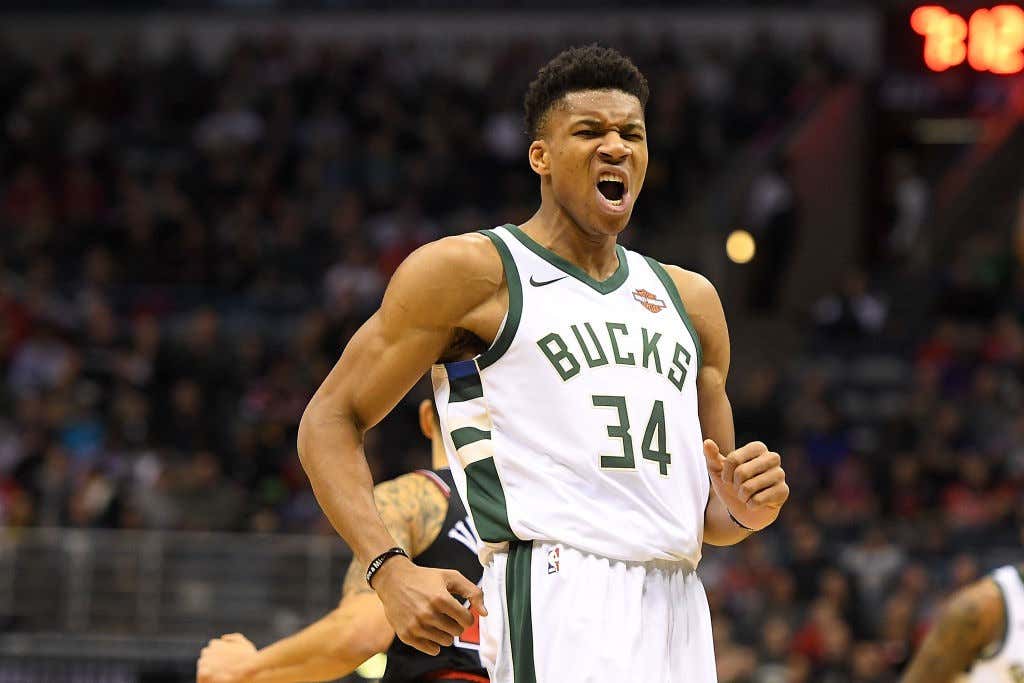 A lot has changed since the last time these two teams met on November 1st, a game the Celtics won 117-113 to bring them to 6-2 on the season. After beating PHI but losing to TOR, the Celtics needed that win to assert themselves as one of the legit contenders in the East. At that time the Bucks were 7-0, had just beaten TOR and many people were talking about how this was the year the Bucks get over the hump and ride Giannis to the Finals. We know what happened next, the Celts went on to go just 4-8 over their next dozen with a handful of brutal losses along the way, and since that 7-0 start the Bucks are 14-9. Things we saw back in November, like Giannis looking like a legit MVP candidate are still true, and the Bucks are coming to the Garden having won 5 of their last 6. The Celtics, despite their back to back bad losses are 8-2 over their last 10, and even though they are going to be playing tonight without Baynes/Horford and maybe Marcus Morris, this is still a gigantic test for both teams.

For MIL, they need to even up the head to head matchup. With TOR/BOS/MIL/PHI/IND all going to be so close throughout the year, these head to head matchups against fellow East contenders are always more important than your regular December basketball game. So far MIL is 2-0 against TOR, 1-1 against IND, 1-0 against PHI, and 0-1 against BOS. As things stand today they are just 1.5 games behind TOR for the top spot, and are tied with 9 losses. Outside of BKN, there may not be a team playing better basketball right now in the East than the Bucks. They’re every bit legit as we thought they would be back in November, and it’s going to take a great performance for the Celtics to go 2-0 head to head.

The last time these two played we looked at how the Bucks were playing in context to the rest of the league, so let’s see how they’ve done 23 games later. For starters, they jumped from the 4th highest scoring team to the league leaders in points per game at 117.8. With no main real injuries that I can find outside of Ilyasova who broke his nose, it’s safe to assume they are going to be bringing that hot offense with them tonight. Over their current three game streak the Bucks are averaging 114.6 points a night. They do it a wide variety of ways, they’re 2nd in the NBA in 3PM, which is a reflection of their new offensive system, so right off the bat the Celtics will be tested to see if they wake the fuck up and defend the perimeter. Here’s what makes them so tough though, aside from being one of the best three point shooting teams, the Bucks are also 3rd in the NBA in points in the paint at 54.7. That’s largely due to one man, you know him as the Greek Freak.

Giannis is averaging a RIDICULOUS 18.4 points in the paint this year which not only leads the NBA, but is also 3 points higher than the next guy in Anthony Davis. Outside of LeBron, this list of filled with PFs/Cs, no SFs. Giannis is so long, and so strong, it’s extremely hard to keep him from getting to the rim. Everyone says the way to make Giannis struggle is to hold him to jumpers, but what if he never has to take jumpers? Seeing as how Horford/Baynes are out tonight, this is extremely concerning. We all just saw what the Pistons front line did to the Celtics right? How did they look at containing Ayton in the paint? Well Giannis is better than all those dudes. The Celts have given up the 11th most points in the paint over their two game slide, and you bet your ass the Bucks are going to try and live in the paint. Robert Williams has shown flashes of rim protection, but he’s a rookie. I have way more confidence in the Celts ability to limit the Bucks three point shooting, they held MIL to 9-29 in the first meeting and they’re 11th in the league at opponent 3PM at just 10.5 a night and 4th in opponent 3P%. To be completely honest, they didn’t really stop Giannis in the first meeting, he finished with 33/11 on 13-22 shooting, but what they did do is limit everyone else which I imagine is going to be their approach again tonight. Let Giannis dunk all he wants, just don’t let the Middleton/Bledsoe/Brogdon trio beat you.

So how on earth are the Celtics going to defend this incredible offense without two of their best defenders? For starters, we’re for sure going to get more Semi. He started the last meeting and held Giannis to just 9 points on 24 possessions. Brad trusts him in that spot so I expect to see a heavy amount of Semi minutes. Maybe they go Kyrie/Smart/Semi/Mook/Theis to start, but considering the Bucks are also the best rebounding team in the NBA, I wouldn’t hate if Brad went big and started both Theis/Williams. This game to me is going to come down to how the Celts defend the three point line and how they are able to do on the defensive glass. The one area the Bucks struggle in is second chance points (25th), so if the Celtics can just not be complete dickheads and actually hit the defensive glass, they should be able to limit extra possessions. Don’t even worry about hitting the offensive glass, the Bucks almost never allow second chance points (1st in the league), and the last thing you want to do is expose yourself to easy transition baskets. You get Giannis on the break, that’s two points. They’re 7th in the league in fast break points, and you’re just asking for trouble baiting this team in the open court.

As Celtics fans, we circled this game as the legit test in this entire recent stretch of their schedule. They took a step back the other night against PHX, but if they come out and beat MIL tonight, I have a feeling people will feel much, much better. I would imagine the Celts don’t make 24 3PM again, but given how the Bucks play they will certainly have their chances. The Bucks are 29th in opponents 3PM, so it’ll be interesting to see how the Celtics approach this. We know they can often fall in love with the three and it comes back to bite them, and we’re for sure going to need much better performances from Terry/Smart who in the last meeting combined for just 4-15 shooting. This is also a chance to see how Jaylen looks against this team, and lord knows he needs a good showing given how he’s looked over the last three games.

So far this season the Celtics have shown the ability to play up to their competition whenever they face a good team. It’s why despite the struggles we point back to their 3-1 record against the other East contenders and feel OK. Tonight, just like it was on November 1st, is another chance for them to assert themselves against a team many still pick ahead of them in the East, and they’re only -1 favorites so basically it’s a toss up. We’re hours away from tip and I’m already afraid of what Giannis is going to do, and personally I’d like to see the Celts show some fucking balls and play well.

It’s been a while since the Celts didn’t pass one of these tests, so let’s see it.