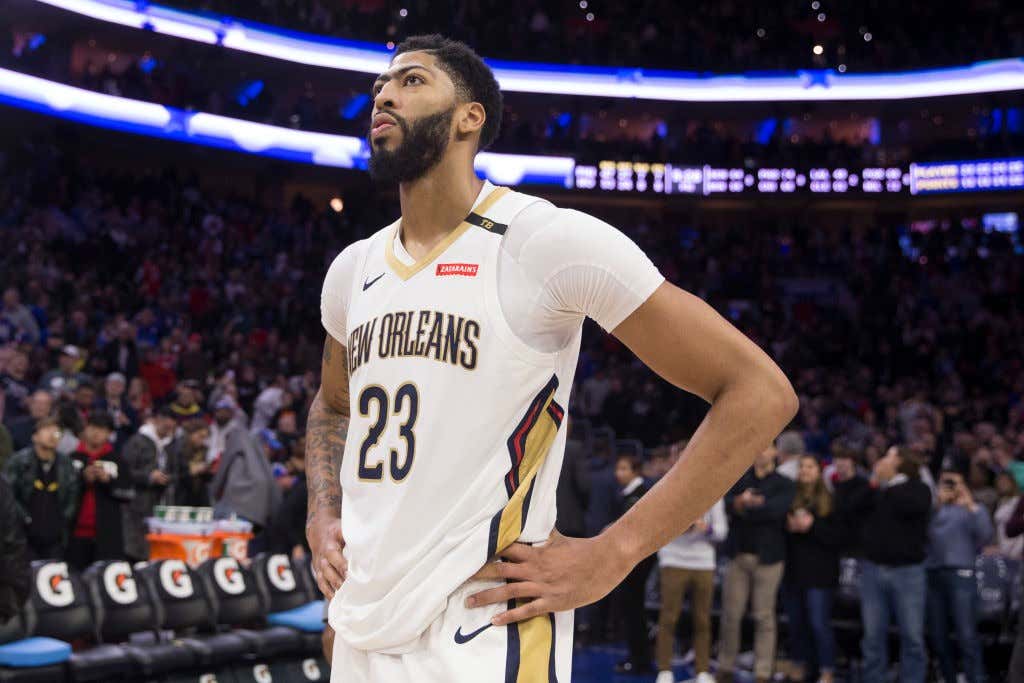 I’ve said it before and I’ll say it again. I really feel for Pelicans fans when it comes to Anthony Davis. It just feels like they can’t even enjoy what he does on the basketball court because every 5 seconds there’s a story about him leaving. Everyone has #sources and knows what he plans on doing, and it seems like recently the AD rumor mill has been firing on all cylinders. Maybe it has to do with their recent schedule, having played both the Celtics and the Lakers in the last few weeks, but for better or worse this is the story that just won’t die. Think of how you would feel if the best player on your favorite team was always being talked about like AD has been? That would annoy the shit out of me.

When the season first started back in October, Vegas had these odds for the next landing spot for AD

I wouldn’t say the teams we’re hearing about now in December are all that different, but after the Pelicans played the Bucks last night, you can officially add Giannis into the recruiting pool

So who will get the rose from Anthony Davis and win his heart this summer? Depends on who you ask

For so many people who seem positive that Anthony Davis is leaving New Orleans, that’s a pretty big assumption because nobody in history has officially turned down the supermax. There isn’t one example. The closest you have is Kawhi, but he didn’t turn it down because it was never offered. Is there a chance Kawhi told the Spurs he was going to turn it down and that’s why they moved him? Maybe, but show me the proof that happened. You know what players like? Securing the bag. I feel like we’re all just assuming Davis is going to leave tens of millions of dollars on the table just to go somewhere else where a title is not guaranteed.

You saw the quotes from LeBron about AD coming on board

Not exactly shocking news that he would be interested because who isn’t. You can’t ignore the Klutch Sports connection, and the groundbreaking reports that the Lakers would include Brandon Ingram and others in a potential deal. Some consider this a done deal, but I’m not so sure. If the Lakers aren’t able to trade for him before the summer, things get a little harder for them because there are other teams out there that could trump their offer. From what I’ve seen Lakers fans are very similar to Celtics fans in terms of what they would want to give up for AD. Sure you can have a couple young pieces, but Kyle Kuzma is off limits. That sounds familiar.

The problem with the Lakers is matching the salaries. Maybe they bring in a third team, but let’s say they try and do it themselves. Even if you include a package of Ball/Ingram/Hart that’s just around $15M so you’re not even close. Why would NO want KCP and his $12M if he’s expiring after this year, it’s not like that space helps them recruit in an AD-less world. This is what always confuses me about the Lakers being talked about as a trade partner. If you think of what NO would want, how do the Lakers make the money work?

Hey did you know the Celtics have been interested in AD for years? When Woj dropped that Nugget on Friday it sort of sent this whole thing in motion again. How was that even news? No shit Danny Ainge has been interested in Davis for years, where has Woj been. Once that soundbite got out we fired up the rumor mill once again just like we’ve done 1,000 times.

You see every time I hear someone on TV talk about this deal, they never mention the fact that the Celtics 100% cannot trade for AD until Kyrie opts out unless he’s part of the deal, and I can’t see that happening. NO doesn’t need a point guard, let alone one on an expiring deal. Once Woj said that though you had massholes everywhere with the “yeaahhhhhh they should trade Terry Rozier/Jaylen Brown/Yabu/MEM pick for Davis” nonsense. It’s so goddamn annoying. If he’s still on the Pelicans come the summer, OK it’s time to talk about Ainge pushing his chips in and making an offer. Until we get to that point though we need to stop talking about the Celtics as a trade partner.

They do have the combination of contracts/picks to make an attractive offer, and that’s why the Lakers are feeling the pressure to get something done earlier. If they wait and they have to match offers with Boston, they lose if Danny truly wants to empty the chest.

I know Giannis was probably kidding, because I’m not sure how they afford Davis. They have to pay Middleton, Bledsoe, and Brogdon this summer, and even if they only keep Middleton, I’m not sure they have the space to fit a max Anthony Davis in. They already have like $111M committed in salary given the huge Eric Bledsoe camp hold, and I’m just not convinced if they were to clear everyone but Giannis from this team that MIL then becomes a destination for Davis.

The idea of those two freaks on the same team together is pretty terrifying, but I’m not holding my breath.

Remember when Stephen A threw this shit out there? Again I ask with what money are the Warriors going to fit Davis in? They already have $120M committed in salary with another $45M in cap holds. So yeah, even if Durant leaves, that doesn’t exactly do much for them. This was probably the most outrageous claim I’ve heard in regards to Davis, and that’s saying something.

At the end of the day, this is a story that has been beaten into the ground for like 3 years now. The Pelicans are not going to give him away and there are reports that they are actually going to be buyers at the deadline to help bring in talent. As of now NO has underachieved which only makes things more tense, but again we’ve never seen a player walk away from the supermax. Here’s the other part of this whole thing, what’s the rush? 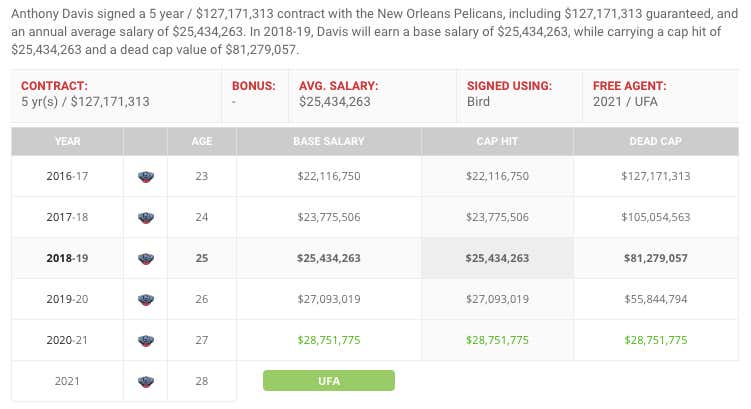 The Pelicans have no rush to move him, even if he tells them right now he won’t resign after NEXT season. A lot can change over that time, it’s not like he’s going to opt out THIS summer and they have to scramble. To me that’s probably the most annoying part of this whole thing. We are so early in the process how can anyone have any idea how this is going to shape out? So what, we do this whole thing again next season too? That’s exhausting. Yes, he can turn down that extension but that doesn’t mean he wouldn’t be able to sign an extension next summer does it? I may be wrong there but I don’t think it’s a 1 time shot deal. Couldn’t he turn it down this summer to keep the pressure on NO to continue to build, and then turn down his player option next summer and sign that same extension if the Pelicans prove to be worth it? If someone knows the specifics let me know.

The sad news is that for Pelicans fans out there, this is never going to go away until we have an official decision. Having already had to deal with this for years, that has to put a damper on enjoying a generational talent and the best player your franchise has ever seen.

So, who do you think win’s AD’s heart?