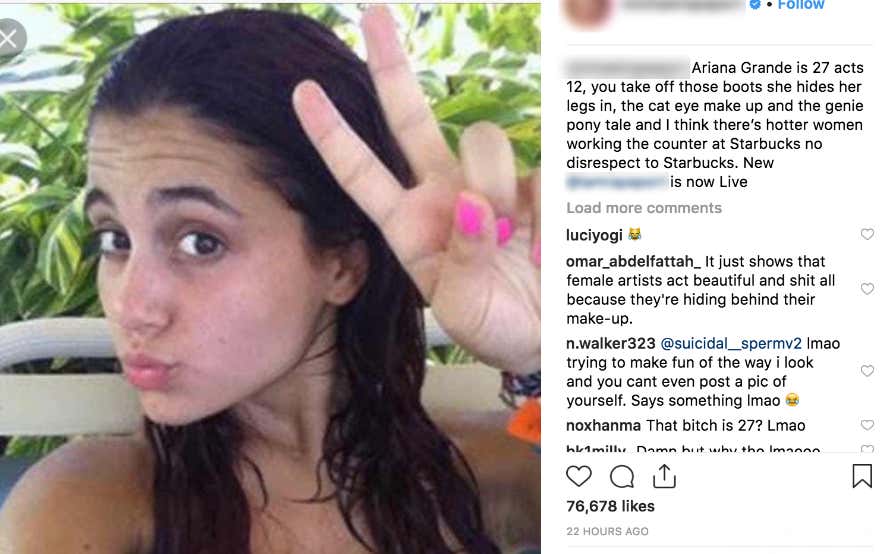 The “Actor” [redacted] upset Ariana Grande fans Wednesday when he tweeted and instagramed negative comments about her looks. The individual who played the part of a random “Skinhead” in Basketball Diaries. who was once charged in the court of law of harassing an ex-girlfriend, is going through the Internet ringer after making disparaging comments about the world famous Ariana Granda. The individual known for the bit voice part of “Joey The Racoon” in Dr. Dolittle 2 came under heavy fire after he found an old photo of the singer and unprovokingly stated on Instagram:

Ariana Grande is 27 acts 12, you take off those boots she hides her legs in, the cat eye make up and the genie pony tale and I think there’s hotter women working the counter at Starbucks no disrespect to Starbucks.

This is not the first time the “Mailman with a tax notice” (uncredited) in Next Friday has made inflammatory comments online towards women. He has routinely referred to the opposite sex as pigs, animals, and other derogatory terms (Google it). The lead from the cult-less 1998 non-classic The Naked Man (20% on Rotten Tomatoes) does not limit his misogynistic comments to social media as on his podcast women are described in terms of as having “No Ass”, with “Medium-Perky Tits”, and are “Looking To Get Piped Out”, specifically at a R. Kelly concert (Google it).

Don’t give into the hate, Ariana. You are beautiful, strong, independent woman who has way too many things to worry about above these hurtful, borderline hateful comments from the man who voiced Szarany in the 1998 – Rescuers: Stories of Courage: Two Families (TV Movie). Thank you, next.