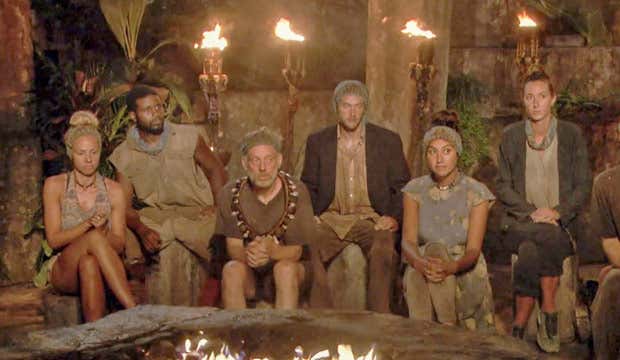 *SPOILERS OBVIOUSLY AHEAD IF YOU HAVEN’T WATCHED THE FINALE YET OR IF YOU WANT TO TAKE MY ADVICE AND GO BACK AND WATCH THIS ENTIRE SEASON BECAUSE IT WAS A REALLY GOOD ONE. A LOT OF PEOPLE HAVE OFF NEXT WEEK SO YOU MIGHT HAVE SOME TIME OVER THE HOLIDAYS TO CATCH UP AND BINGE IT*

Last night was as highly anticipated a finale as we’ve had in quite some time. It’s been a great season and with the cheating/scandal rumors, it was sure to make great television. Ultimately, it was a bit underwhelming but still enjoyable and better than any other trash that was on television last night. Let’s recap.

The episode started off with Angelina finding a clue to the idol and then losing said clue. It was perfectly Angelina. However, I do respect the move of lying and saying she just fell and hurt herself. It was a strong play from her instead of being like “Yeah I got hurt looking for the idol.” Her saying “I could’ve died” from being on like an 8 foot ladder was also perfect Angelina. 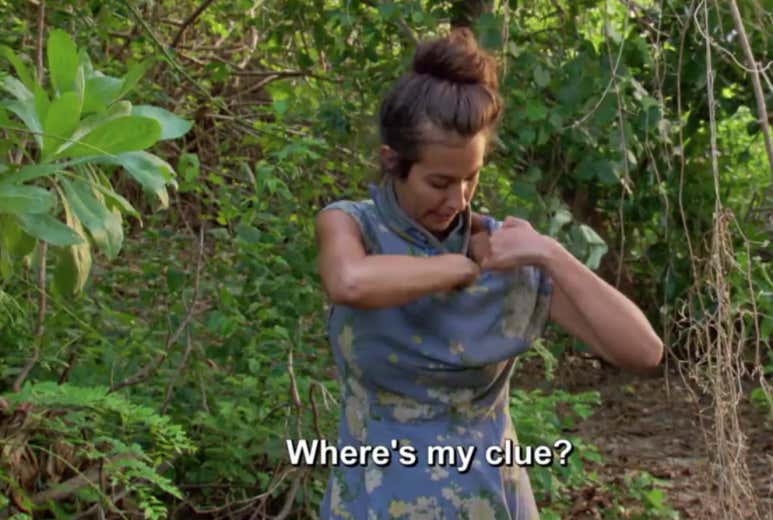 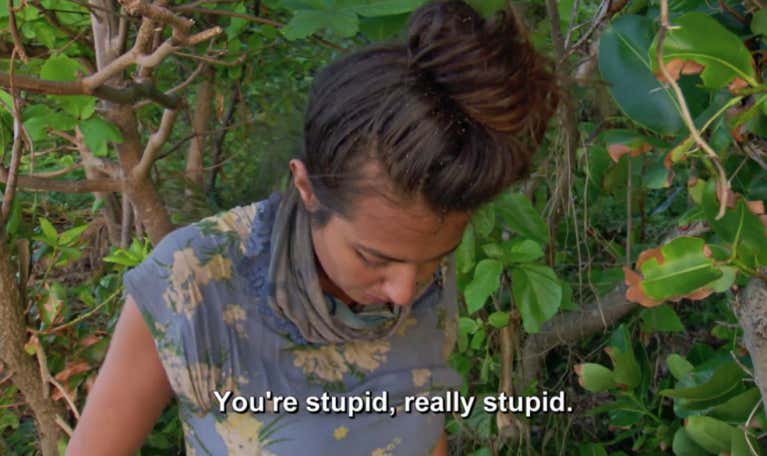 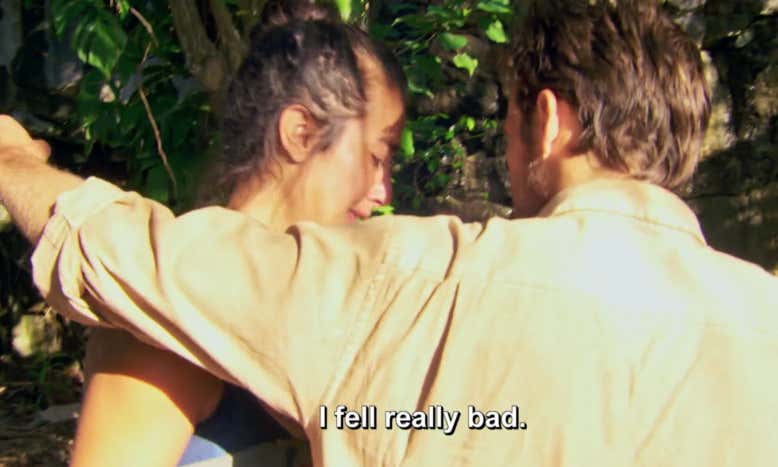 Nick won the immunity challenge, and took Mike and Angelina on reward. Poor Alison was whining that she never gets taken on reward. Boo-hoo. One of my main Survivor strategies would be never trying in reward challenges (this was also immunity though). It just gets people mad at you when you don’t choose them. Plus, I’ll have such good relationships with people that they’ll probably choose me anyway.

Nick winning immunity understandably put Davie on the chopping block as the biggest vulnerable threat. As I wrote in my preview yesterday,  I thought it was obvious that Davie or Nick would win the game. I did pick Davie but put it basically at 50/50. While the initial plan was to vote off Alison, everyone but Nick flipped on Davie, sending him home. It was the smart move. The idea that Alison was this huge threat is something I still don’t understand.

Davie played a great game and was a fun character. Huge fan favorite. I would say we’ll almost definitely see him on another season sometime.

Nick was steaming mad after the vote. He had a habit this season of getting a little too butthurt after a vote didn’t go his way. 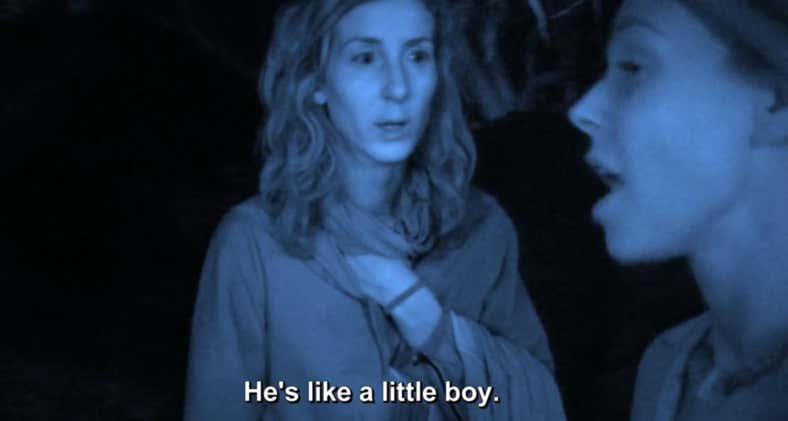 He won immunity again on a puzzle that looked very difficult. 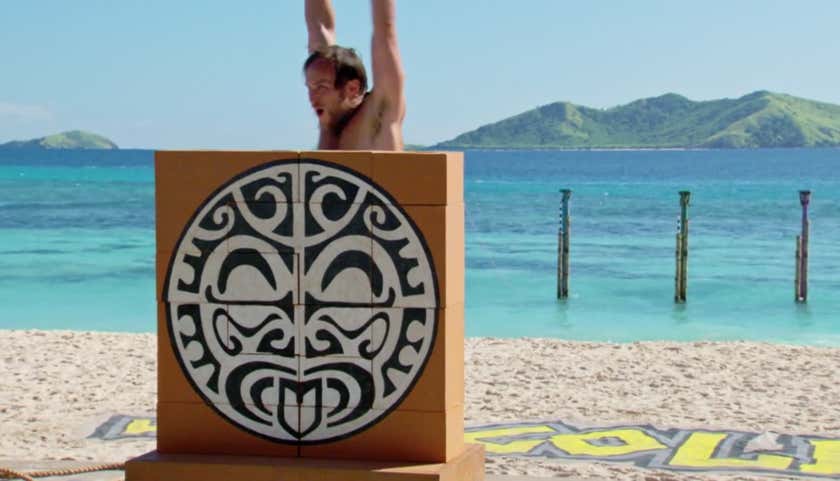 It was probably a much needed victory, because Mike seemed ready to turn on him. Mike did play a good game, but I found him very annoying at times especially when he kept targeting all the fan favorites. He also was just an annoying dick at times.

Nick winning immunity set up an outstanding moment with Angelina. Being the out-of-touch lunatic she is, she decided she needed to embarrass Alison after their “rivalry” all game. She made a terrible fake idol for Alison to find, so that Angelina could use her idol on herself to make a big move in front of the jury. Her telling the remaining castaways (who she’s competing against for jury votes) that it’s a blatant play for jury votes, was also astounding.

At tribal, Alison played her obviously fake idol, knowing that it was an obviously fake idol. Then Angelina had her big moment of playing the idol, yet somehow ruined it. It’s borderline impossible to play an idol and have people cringe at you. It’s usually a powerful moment. Angelina, however, achieved the impossible. 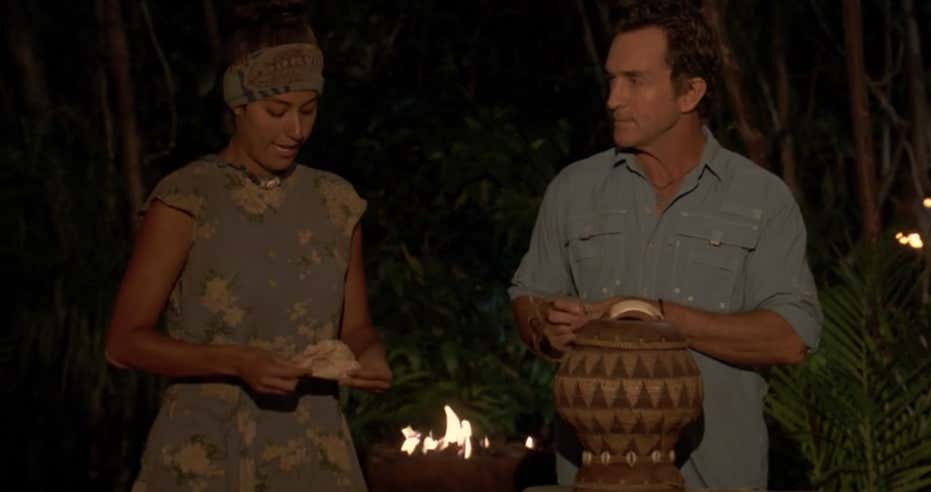 I think I’ll end the season actually liking Angelina. She was so unlikeable and not self-aware that it was endearing and entertaining. Even Jeff said that he’d love to have her back for a future season. She’s the perfect Villain in a future Heroes vs. Villains 2.

Mike also put himself in the villain role by telling Alison she should just try to leave the game with “dignity.” He turned out to be on the right side of the vote, as swing votes Nick and Kara decided to take out Alison instead of him. I probably would have voted Mike out here instead as I still refuse to believe that Alison had any chance of winning the game.

I love these types of final immunity challenges over long obstacle courses. After 38 days, it’s basically testing endurance of the mind. The one they chose is one of my favorites, and one I would definitely win.

Unsurprisingly, the player I’ve compared myself to most, Nick, won the challenge to guarantee a spot in the Final 3. He had the choice to save one person and let the other two fight it out over a fire making challenge. He made the pretty obvious choice to keep Angelina, who clearly wasn’t getting any jury votes. It was very funny to hear Angelina say “Nick chose me because I’m so persuasive,” and not because she was easy to beat.

I also like the move from Nick to let Mike and Kara know ahead of time so they could practice. Strong jury management even though Kara voted for Mike anyway.

Mike surprisingly beat Kara making fire and it wasn’t even close, which set the Final 3 for Nick, Mike, and Angelina. I did predict yesterday that the final 3 would be: Winner, Angelina, and Mike. So nailed that.

The Final Tribal Council had its new format of open discussion on the “outwit”, “outplay,” and “outlast” portions of the game. I was lukewarm on it at first, but think I like it now. It allows for good back and forth between everyone. I just like having closing statements, but that was basically the “outlast” portion of it. Also credit to Christian for wanting to spend more time on “outwit” which is clearly the biggest part of the game.

Gabby was the most annoying juror maybe ever, throwing out stats about women finding idols and saying how hard Angelina had it. Give me a break. The idols are out there for everyone, not sectioned off to a “men’s only” part of the island. And Angelina wasn’t disliked because she was a woman. She was disliked because she, like Gabby, was insufferable.

I thought all three actually had strong closing “outlast speeches.” All three showed emotion and told their story well. I loved Mike’s analogy of being in the backseat telling the driver which way to go, while never actually having to get in the driver’s seat.

The vote basically went as expected. For a second, I thought Mike was going to pull the upset. The right person ultimately won though. Congrats to Nick. 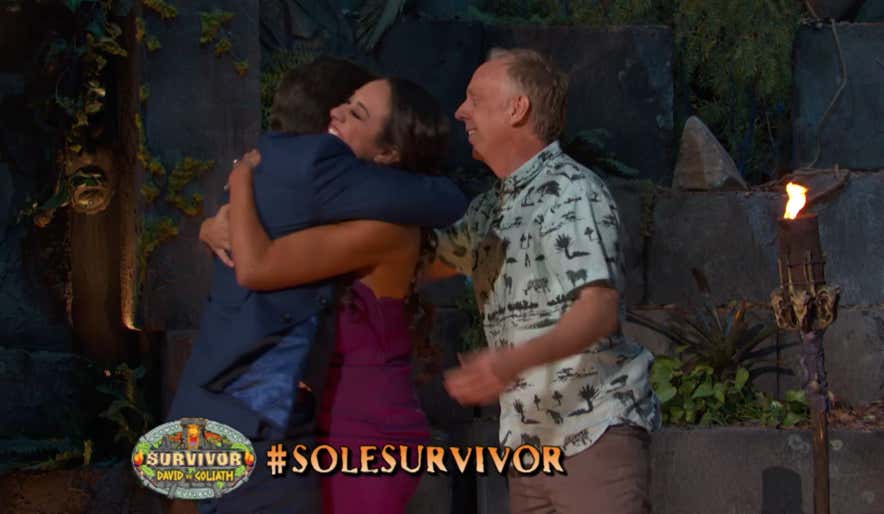 I can’t wait for my moment.

(Also Jeff stop forcing kids to be part of the reunion show. Nothing I cared about less than who that little girl thought would win).

The reunion was pretty abbreviated since the actual episode ran over. As for all the anticipated drama, we didn’t see much of it.

-TMZ reported a possible proposal. That didn’t happen but who cares.

-Alec was not at the reunion show. He was disinvited for breaking his NDA by posting a picture with Kara on Instagram back in May.

-As for the cheating scandal/possible DQ, we unfortunately didn’t get to see that. The reports are that contraband was found, but producers decided not to act on it. I don’t want to see who or what in case CBS is reading this and holds it against me for casting. But look it up and you’ll find it.

Other notable thing from the reunion show was Natalie being mad at her portrayal. Give me a break. I understand people being mad with their edit if they were invisible, but Natalie said and did all the things they showed. Not like it was CGI footage.

Next season has a lot to live up to, and I fear it might be a bit underwhelming. I’m very confused by the “Edge of Extinction” theme. It will be fun to see returning players, but it’s a disappointing foursome.

-Joe is a great physical player, but isn’t the most exciting personality and has little chance of winning with his gameplay.

-I have always found Aubry to be kind of annoying and don’t understand the obsession with bringing her back.

-Kelley I’m excited to see play again, but she might be targeted early after her showing on Second Chance.

-David is who I’m most excited to see back. He’s like Mike but likable.

And that’s a wrap for Survivor: David vs. Goliath. Very enjoyable season overall.