Theo Epstein escaped his handcuffs on Tuesday to make the kind of bargain move he’s been seeking in this spending cycle. The two-year, $5-million deal with middle infielder/utility man Daniel Descalso adds to an area of depth that was already a team strength.

Including the currently suspended Addison Russell, they currently have six middle infield options with major-league experience on the roster. They range in age from Ian Happ, who is entering his age-24 season, to Ben Zobrist, entering his age-38 season.

Descalso was signed largely for a trait Joe Maddon refers to as “his veteranship,’’ which Epstein feels was lacking at times in the troubling second half last season. He’s never had an rWAR greater than 1.1 but he’s helped teams reach the postseason five of the last seven years, including a 93-win Arizona team last season. His addition could mean a trade or return to Triple-A for David Bote, who contributed down the stretch in 2018.

Having invested heavily in starting pitching — Jon Lester, Cole Hamels, Yu Darvish, Jose Quintana and Kyle Hendricks project to earn about $85 million this season, accounting for more than 40 percent of the current payroll — the Cubs are searching for creative ways to import a bat or two.

They may yet trade from this middle infield surplus. But they should be very careful about even considering a trade for Russell, whose stock has plummeted because of his 40-game suspension for domestic violence and a modest .245/.311/.376 slash line over the last two seasons.

“We’re certainly not going to rush out and make change for change sake, especially if it means selling low on a number of players,’’ Epstein said, speaking in general terms. “But we’re mindful in that we want change in the way we play, we want change in how well we played and we want real change in our offense, where we were the second half of last season. We have a lot of ideas on how we can get there. Some of them involve help from outside the organization, some involve digging in with the players and coaches we have and effecting change.’’

While it would be easy to cast Russell aside, he is the guy they should work the hardest to get back on track. Javier Baez is a much flashier shortstop than Russell but the Cubs have played their best in the Maddon era when they had Russell at short and Baez at second base. He deserves another chance, assuming there are no more incidents like the one with his ex-wife, Melisa Reidy.

Maddon switched Russell and Starlin Castro defensively on Aug. 7, 2015, moving Russell from second base to short. It was a move that helped trigger a 38-17 finish that got them into the postseason and on their way to the first of three consecutive NLCS appearances.

That’s a difference of 6.6 wins per season — in other words, a huge difference.

Given Russell’s massive downturn in projection since he hit 21 homers, drove in 95 runs and walked 55 times in the magical 2016 season, you wouldn’t point to his bat for having such an impact. It likely lies in how much better the Cubs are in the field with Russell at short and Baez at second than with Baez at short and a rotating cast at second.

Your eyes probably tell you Baez is great wherever he plays but the reality is he offsets his great plays at short with too many mistakes when he forces the action.

Metrics show he’s been worth +19 Defensive Runs Saved, per Fangraphs, in 1856 innings at second base but only +5 DRS in 1530 innings at short.

Russell meanwhile has piled up +57 DRS over 3546 innings at shortstop. That’s not quite Andrelton Simmons territory but it’s impressive.

The Cubs currently have about $223 million in salary and benefits on the books for 2019, which is $17 million above the Competitive Balance Tax threshold. That number would be higher except Russell has not really cashed in on having earned Super 2 status a year ago, when Baez fell short of Super 2.

Largely because he has 78 days’ service time more than Baez, Russell earned $3.2 million in 2018 while Baez was the ultimate bargain — an MVP candidate earning only $657,000. Both are eligible for arbitration this time around, with Baez jumping to $7.1 million in a projection by Cots Contracts while Russell will be due a modest increase, to about $4.3 million, if that.

There’s been speculation for years about how long the Cubs could keep Baez and Russell together. The crossroad may already have arrived had Russell had the smooth development Baez has experienced the last two years but Russell’s bigger-than-baseball issues provide salary relief that should keep them side by side in 2019, hopefully with Russell on the left side of the bag, not Baez. That’s when they’re in 100-win formation.

That was a long ass article, so let me break it down for you: 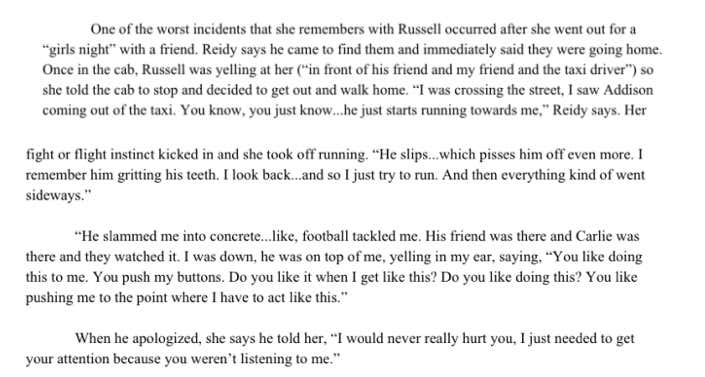 … and Phil Rogers had the gall to publish an article in a well-renown journal saying THE CUBS SHOULD VALUE RUSSELL BECAUSE THEY WIN WITH HIM PLAYING?  That Russell is a part of the Cubs “100 win formation” if he “continues to improve as a person.”

Holy fucking shit Phil.  How fucking tone deaf can one person be?  It’s seriously mind blowing and offensive.  It should enrage anyone with a brain to no end.  He got ratio’d so badly after tweeting the link to the article (for the 2nd time!!!) that I couldn’t even screen record all of the responses saying, “you’re a fucking idiot” to him because the file size was too big.

Addison Russell is a piece of shit human on a macro level, and a dead beat dad, abusive husband, and dog shit teammate on a micro level.  And *news flash* some things are more important than winning baseball games.  I don’t care if he’s Mike Trout, a piece of shit like this shouldn’t be playing professional baseball.  He should be mopping the floors at the local junior college, if that, and even if you’re an idiot who does still care about whether or not he can help your team win games, at least have the smarts to keep your idiotic opinion to yourself.

Fuck this guy.  Doesn’t matter if you’re a Cubs fan, Sox fan, or hate the game of baseball.  Get this guy the fuck out of Chicago.  He’s nothing but a black eye on our city.