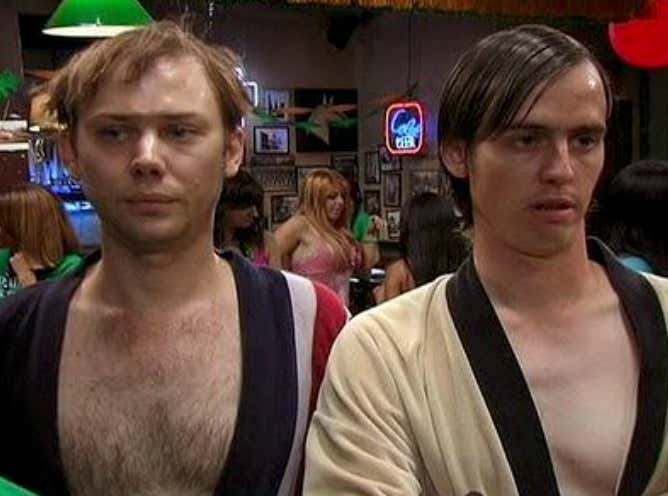 They’re already in Philadelphia so all these guys need are a uni-browy sister, some worn-in robes, and nice, warm jugs of milk. Once that’s secured they’re in the McPoyles clan from It’s Always Sunny.

Two Marine Corps reservists described being viciously attacked in Philadelphia by two alleged Antifa activists in November, Philadelphia Magazine reports, testifying on Dec. 13 that an “antifa mob” mistook the two Marines as members of a far-right group the activists were protesting.

Reservists Alejandro Godinez and Luis Torres testified that they were in Philadelphia for a Corps event on the evening of Nov. 17 when suspects Thomas Massey and Tom Keenan — described as “linked to antifa on websites and social media” by Philadelphia Magazine — allegedly approached them and asked if they were “proud,” a reference to the “Proud Boys” group that was reportedly in attendance at the nearby alt-right “We The People” rally.

Godinez apparently mistook the question as a reference to “the few, the proud, the Marines” and responded in the affirmative, after which a group of “approximately ten other people … began attacking them with mace, punches, and kicks” while calling them “Nazis” and “white supremacists,” Philadelphia Magazine reports.

Godinez testified that he was “bewildered” at the white supremacist slur and yelled “I’m Mexican!,” according to Philadelphia Magazine. Despite this, he was “maced at least six times, hit in the head, and kicked in the ribs” while onlookers reportedly chanted “fuck him up” while others, he alleges, called him “spic” and “wetback.”

If that doesn’t make your blood boil, I’m not sure what will… but also, how absurd. What are the odds of the Antifa nutwing department searching for the far-right (they’re tried to rebrand but a spade is a spade) ‘proud boys’ & instead finding guys who are proud to be Marines and totally misunderstanding that?

The next court date is December 27th & I hope justice is served. Anyone who does this type of stuff is just as douchey & worthless as any pathetic “proud boy”.

For a quick Antifa refresher.. This group is basically the polar opposite of the alt-right. ‘Antifa’ is “a conglomeration of left wing autonomous, militant anti-fascist groups in the United States. The principal feature of antifa groups is their use of direct action.” That sounds neat & all, but more often than not it seems the ‘direct action’ only serves to alienate everyone they come into contact with, much like their enemies over on the alt-right. This story is no exception.

Oddly enough, my cousin’s teenage son had a run-in with Antifa in Philly the same day as those Marines, November 17th, because of a Gadsden flag patch on his jacket. Not that I even need to defend it, but the flag was used early on by the Continental Marines during the Revolutionary War, and his uncle is a Marine, (his super cool 2nd cousin Kate is a Marine as well), and also it’s just a cool-ass looking flag.

So one of the nicest guys you could meet is just minding his own business & suddenly he’s getting harassed because of a patch. Its symbolism has been highjacked a bit by wackos, but I assure you that wasn’t even on his radar. And then these doughy, neckbearded morons come rolling in thinking they’re Nazi-fighting-ninjas because they got a bunch of Guy Fawkes masks off Amazon, when in reality they’re just terrorizing a teenager attempting to enjoy a day in the city. Very tough of them. Badass. I’m just glad his incident with them didn’t have the same outcome as those Marines.

Oh man, I’m really on a roll now. I’m heated. I’m pissed. There’s only one thing to do when I get like this & it’s gonna blow everybody’s dicks off.

::settles into office chair, steeps tea, quietly makes Venn Diagram that she thinks will make some deep, hilarious point when quite honestly it is sub par & a bit of an awkward stretch:: 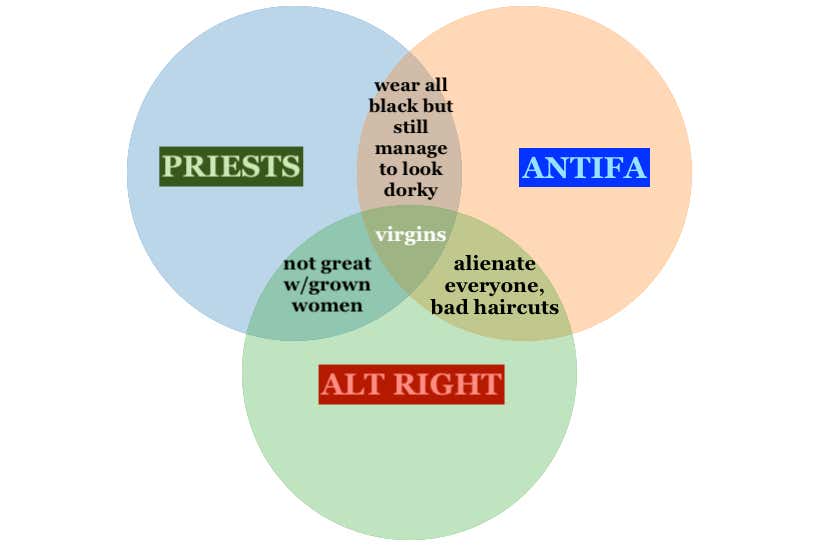