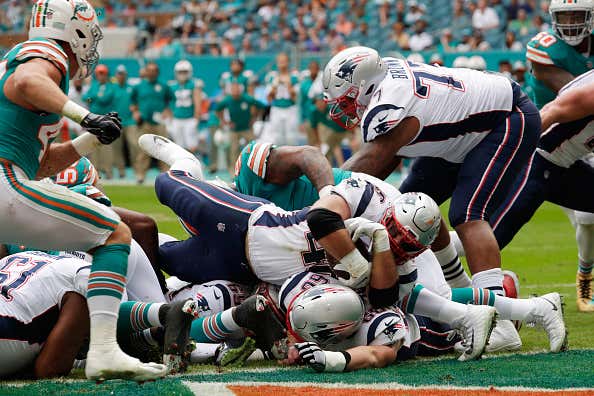 In case it matters to you – and trust me, in the time it takes me to type this sentence I’ve have invented at least 10 new shits to not give – the Pro Bowl selections have been announced. And the Patriots have exactly two players on the roster. Stephon Gilmore, no surprise there. And Tom Brady, who probably is a surprise to the people who look at 5 losses and 1977 on his birth certificate and simply decide he’s Nathan Peterman now and we’d all be better off if Jimmy “IR” Garoppolo was still here. But it’s true. Brady joined Tony Gonzalez, Peyton Manning, Bruce Matthews and Merlin Olsen as the only 14-time Pro Bowlers.

Which is swell for those guys. And not only do I not object to only having two Pats on make the team, I embrace it. We all should. Part of being a Patriots loyalist during the most impressive dynastic run in sports history is priding ourselves on how few Pro Bowlers this team has had. This run has been built on players subjugating themselves by playing their role in the team concept, personal numbers be damned. Great athletes like Richard Seymour, Troy Brown, Tedy Bruschi, Vince Wilfork and Devin McCourty being absorbed into Belichick’s Borg collective and (wait for it) … doing … their … job. So I’d never burn the calories necessary to argue some Patriot or another got shafted by not making the Pro Bowl team.

With exceptions. And this year there is an exception. James Develin got screwed.

If the Pro Bowl team is still going to include a starting fullback, if they’re going to hang onto the position like a vestigial organ that hardly gets used anymore – the appendix of football – then how could they not put Jimmy Neckroll on the team? As I’ve mentioned before, he has been the most under appreciated component of the Patriots offense. As Josh McDaniels has tried to transition this attack into relying more on the power running game to set up the pass, Develin has had a huge role. Sony Michel and, to a lesser extent, Rex Burkhead have primarily run out of two-back sets. Even those couple of games where Cordarelle Patterson was the lead back, he was following the “46” underneath that neckroll into the Gates of Hell.

But Develin has done more. He’s stayed on the field for passing downs. He’s pass blocked. He’s been split out wide. He’s given a level of respectability to the dreaded Short Yardage Handoff to the White Guy Up Back. Compare him to the actual AFC fullback choice, Kansas City’s Anthony Sherman, and it’s not even close: 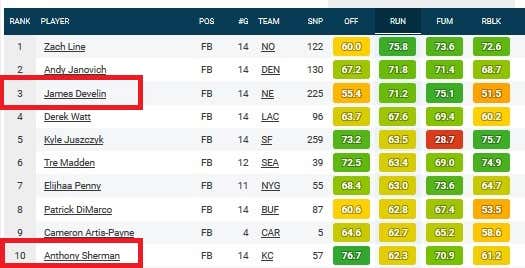 To repeat, I don’t care. I’m not saying Pro Bowl berths are any kind of a big deal. And if I have my way, no Patriots player will be available for the game. All I’m saying is that not naming Jimmy Neckroll to the team is one of the gravest injustices ever done.