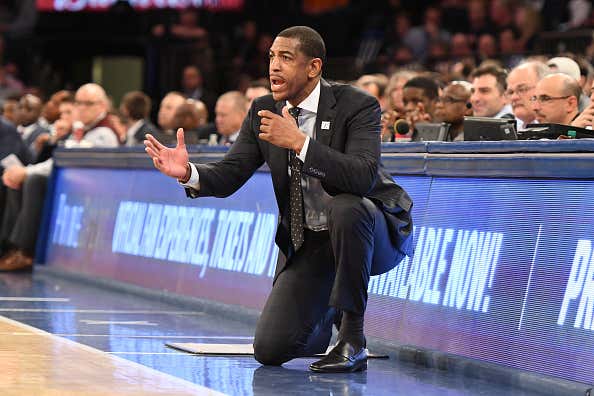 [ESPN] – Former Connecticut men’s basketball coach Kevin Ollie has filed a complaint against the university in federal court, alleging it illegally attempted to stop him from filing a racial discrimination claim stemming from his firing in March.

The complaint, filed Tuesday in U.S. District Court in Hartford, claims Ollie was subject to “disparate treatment” compared with his predecessor and former coach Jim Calhoun.

Ollie alleges that Calhoun, the Hall of Fame coach who won three national titles at UConn, managed to keep his job despite committing NCAA violations more serious than those Ollie was accused of and that were used to justify his firing last spring.

“Calhoun … was found to have engaged in conduct in violation of NCAA rules and regulations following an investigation conducted by the NCAA and Defendant in 2011 and 2012 that was more severe than the conduct which Defendant has identified as the basis for its decision to terminate Plaintiff’s employment, but Defendant never terminated the employment of Jim Calhoun,” reads the complaint.

There’s no surprise that this was going to get ugly and we now reached that point. UConn fired Kevin Ollie for just cause using allegations from the NCAA against Ollie as their reasoning. It was essentially done to find a way to get rid of him and not pay everything they owed him. The moment it happened everyone knew the reason and that it was going to end up with a lawsuit.

But now Kevin Ollie is bringing in Jim Calhoun. It makes sense from a legal standpoint and if you’re Ollie trying to collect the money you’re owed. Calhoun did violate NCAA rules as well and obviously didn’t lead to his firing. The difference obviously being the fact that Calhoun is one of the five best coaches in college basketball history and brought UConn a bunch of national championships and more importantly a bunch of money.

This is where it gets tough though. Everyone knew Ollie deserved to be fire from his production on the court. His offense was one of the most basic and predictable offense in the country. He never found consistent play. He had the one run to win a title but other than that was very average with results. However, he didn’t do anything different than Calhoun, or really 99% of coaches in America. UConn just didn’t want to pay him $10 million because they are also dealing with payouts for other coaches in the athletic department. It’s a cheap way to go about it.

It’s going to be something fascinating to watch as this all unfolds. Again, I think everyone agrees that Ollie will end up winning this as it was clear that UConn tries some excuse to just not pay him. But now bringing up Calhoun is going to cause another twist in this split. UConn should have just paid up right away instead of trying to be cheap.