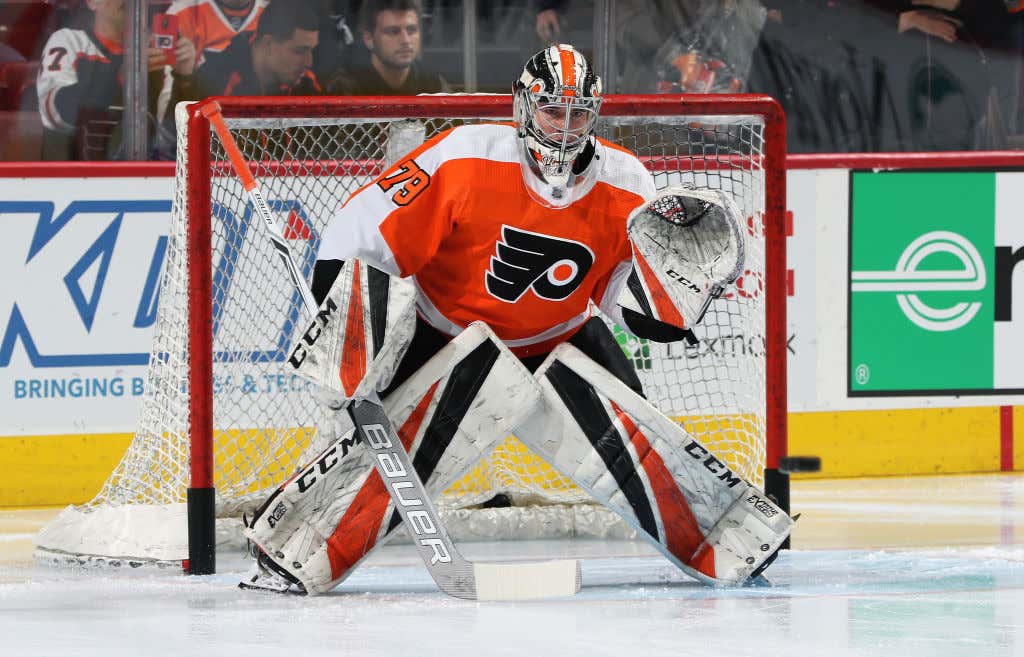 I just… I want to cry right now. I am so goddamn happy for our boy Carter Hart. There was so much anticipation heading into this game. Carter Hart has been pegged as the Flyers’ goalie of the future for a few years now. Every single time people outside of this city shit on the Flyers for not having any goaltending for the past 40 years, we’ve constantly told the haters that Carter Hart was coming. The first ever 3x WHL goaltender of the year. The first ever 2x CHL goaltender of the year. The 2018 World Juniors gold medalist. For a franchise that has had such shit luck with goalies over the years, Carter Hart has had the pressure on him to be this franchise’s savior. And when it was announced yesterday that the team called him up to make his NHL debut, many people were skeptical because they thought it was too soon. People were fearful. People were afraid that bringing Carter Hart into this current circus show in Philly would end up destroying his confidence and that it would set back his development. I was not one of those people.

Obviously the Flyers didn’t bring Carter Hart up under the best circumstances. The reason he was called up is because 5 other Flyers goalies had gotten injured. And then they brought him up just as they canned their coach. So obviously there was a lot going on and it was a lot to ask of a 20-year-old to make his NHL debut in that kind of environment. But the kid deserved a chance to give it a go after the last stretch of games he’s had in the AHL proving that he’s finding his game as the professional level. And in his NHL debut?

Great work at getting square to Larkin here after a bad turnover on the penalty kill, forcing Larkin to try to get too cute with that shot.

Big time save in the dying seconds of the 3rd period while securing a 1-goal lead.

The kid was an absolute stud and proved that he can play at this level. Granted, the Flyers made it pretty easy on him for the majority of the game. Hart only had to face 22 shots on the night and you could tell the team was playing with a ton of extra gas in front of him. You had guys selling out and giving up the bodies to block shots. And the Red Wings only had 1 shot on goal for like the first 11 minutes of the game to help him settle in. But on those 22 shots he faced, he made the key saves when he needed to. And the only 2 goals he let up weren’t his fault. The first one had a ton of traffic in front of the net that was scored on the powerplay for Detroit.

And the 2nd one was after a bad turnover at the Flyers’ own blueline.

So 22 shots faced and only 2 goals allowed in his NHL debut, neither of which were bad goals to give up. I’d say that was about as good as you could ask Carter Hart to be after getting thrown into the fire here in his first NHL game, especially with all of the expectations for him to be a savior for this organization moving forward.

I’ll obviously have more on the game tomorrow, but the Flyers have something special with Carter Hart. I understand that it was just one game and it was only one game against the Detroit Red Wings. But the confidence he showed in that first game and the way his technique looked all night is more than enough reason to be excited for the future. Oh and also, his family is perfect. I love them so much.

What a night to be a Flyers fan. My Hart is full.