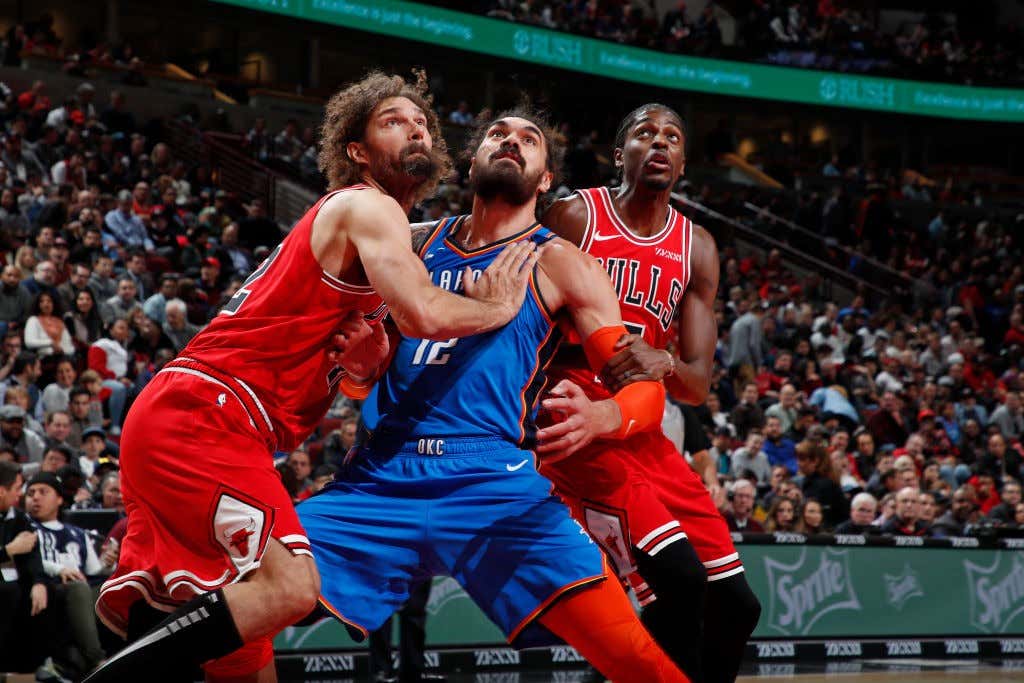 it made me think. Of all the players in the league, who would I least want to fight? This “brawl” had a couple of those guys so I decided to expand it to a Top 10 list. Now obviously being a washed up 190 pound white guy, literally every single NBA player could beat the shit out of me. So think of this as a list of guys you wouldn’t want to fight if you were also an NBA player and not some weak pathetic blogger. There are many factors that go into this list, not just size and weight but overall craziness. Here’s how I netted out

Not only is he a giant, but I’m pretty sure Robin Lopez is a certified crazy person. Not only does he beat up mascots, but he is legit not afraid to partake in a classic NBA hold me back fight no matter who it is. He has a “fighting” history in the league and it seems like every season he is involved in some sort of scuffle. Also I can’t rule out that he doesn’t have some sort of weird twin powers, so I would want no part of that.

I watch a shit ton of Terry Rozier and I can say with certainty that I in no way want that smoke. They list him at 6’1 190, but I feel like he’s bigger than that. He’s also from Youngstown which I’ve been to once when I was driving across the country and I’m not fucking with anyone from Youngstown. He has shown he is not afraid to scrap no matter if you’re a guard

That is a level of crazy I’m all set with.

To be honest I should probably have Westbrook higher on this list because he’s a legit psycho, the only thing is I’m not so sure he’s one to actually go through with a fight and not just bait you into something so he gets a whistle. He’s had a pretty eventful last few days with the scuffle last night and then the game before against DEN

He’ll chirp you that’s for sure, and there are not that many crazier players in the league so that has to be a factor, but once you see the rest of the names on this list I think it’ll make sense.

Ummmmm are you interested in fighting the Terminator? Maybe some sort of AI combo between that and RoboCop? I didn’t think so. You think just because he’s quiet that means he won’t tear you apart? It’s the quiet ones you have to worry about and he brings a level of technology to the table I have no interest in. You know the phrase bring a knife to a gun fight? That’s what you would be doing against Kawhi. He would bust out some sort of defense weapon against you and you’d be toast.

A lot of people call Marcus a fake tough guy, but that’s because they don’t really know him. I know the pain and the struggle he’s been through in his life and I know what a complete animal he is on the floor. Yes he flops, but he shows absolutely no fear. There’s something to be said of a guy who has no fear and it doesn’t matter who it is. He has great size where he can match up with anyone, and again he has a level of crazy that you do not want to mess with

I mean have you seen him? Honestly he would be higher but he’s such a gentle giant I’m not sure he has a fighting bone in his body. I search everywhere on the internet for something an this was as close as I could get. We know he doesn’t feel pain after essentially walking this blow off

so my fear would be there is nothing I could do to inflict pain and come out on top. He’s like one of those Game Of Thrones giants that basically never die. I just don’t see how that ends up well for me.

You want to talk about crazy, you have to mention Patrick Beverley. Not only is he not afraid to fight, but the concern here would be he would do something dirty like kick me in the nuts. He doesn’t have the cleanest history when it comes to this sort of thing, so you have a guy that is looking to fight and will fight dirty. That’s a dangerous combination, and usually when a guy is out looking to get into a fight like he is, that tends to mean he has nothing to lose. No thank you.

Would he actually fight? Probably not. But if he had to, given his freakish size and strength there are not too many people on the planet that survive that fight. ESPN lists him at 250 and there’s no way that’s true. At best you’d have to hope that you get one shot in and then LeBron would just fall and milk it because that’s what he does, but considering he’s basically an NFL TE I want no part of that.

I hope people haven’t forgotten what a badass Boogie is just because he’s been hurt. When he was healthy he was 100% someone you did not want to fuck with. First off his size is ridiculous, and then you mix that with his short temper and yeah, that’s how you get your ass whooped. Another one of those guys who has nothing to lose and has a history of having a short fuse, you’re just asking for an early funeral if you mess with Boogie

This has to be the choice for everyone. Steven Adams is already one of the strongest players in the league, but just look at the dude he’s a monster. Doesn’t hurt that he’s one of like 17 kids so you KNOW he grew up in the mud. He is such a nice guy you wouldn’t think of it, but you do not mess with Steven Adams, he will crush you. He’s a guy that took a Draymond kick to the dick in stride, so what do you think you’re going to do to him? He seems like the kind of player that will laugh as he is smashing your skull in. Don’t let his accent fool you, he’s a beast. Just look at how he was tossing people left and right last night.

So that’s my 10. Feel like theres a good mix of guards, big men, robot killing machines, everything. Sadly this is where the hockey hardos will chime in about how soft the NBA is, but that’s fine. My question is to you, is there anyone I didn’t list that you would throw in there?