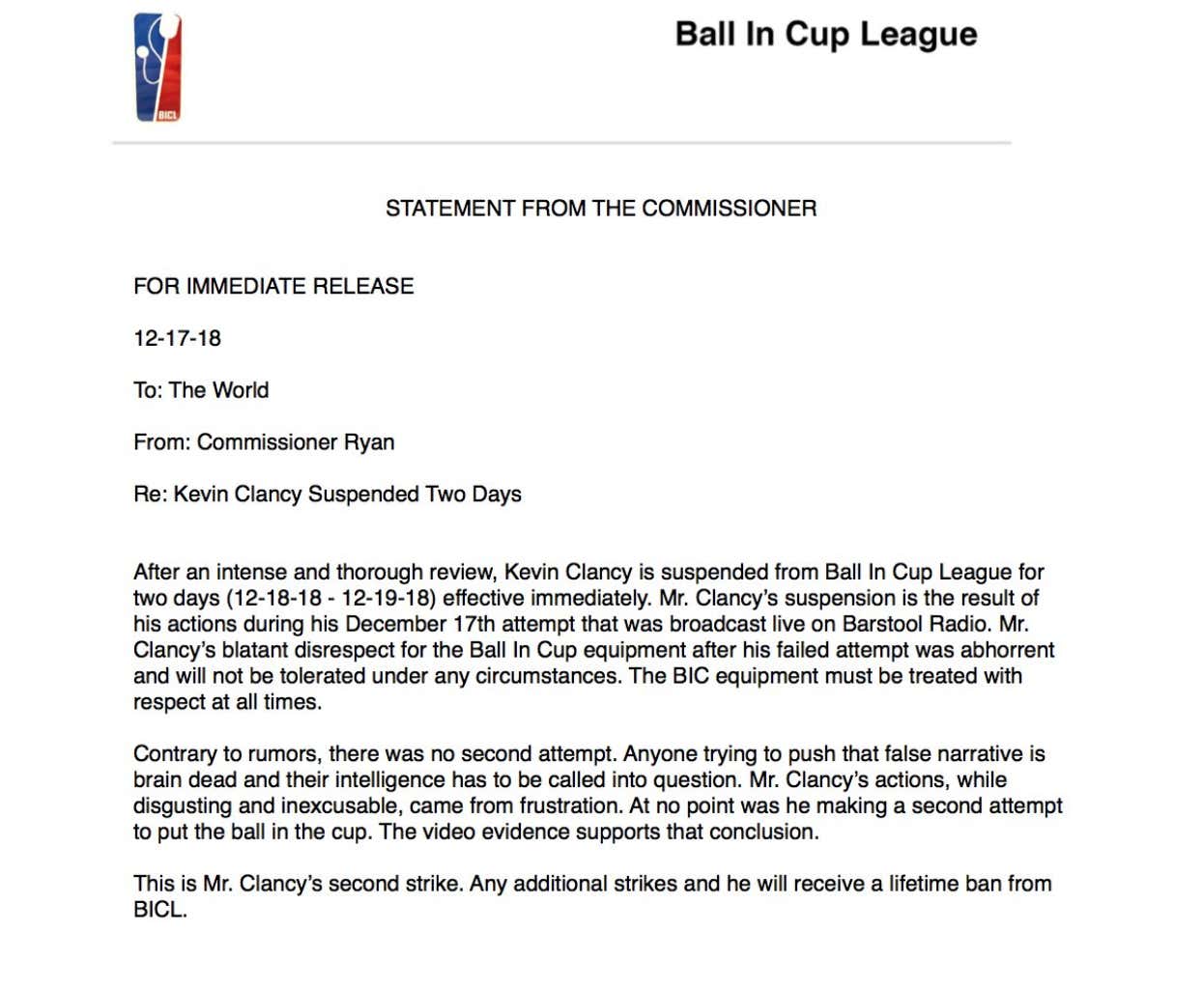 So today KFC was going for 6 in a row in Ball In Cup. It would’ve been a monumental accomplishment in the BICL seeing as he is the only player to have gotten 5 days in a row. He failed in his attempt at history but that wasn’t what grabbed headlines. After his failed attempt, KFC handled the Ball In Cup irresponsibly and, quite frankly, recklessly. It’s that behavior that landed him the two day suspension.

The people who are saying KFC was going for a second attempt are (as I said in the press release) brain dead. There’s no dumber group of people. Watch the tape again and you can see he’s clearly not looking directly at the Ball In Cup. Yes, the ball went above the cup plane which is 1/2 of what it takes to be an official attempt, but to truly be an official attempt there also needs to be intent. Intent to get the ball into the cup. There was zero intent. Zero.

But that doesn’t mean what KFC did post-attempt doesn’t warrant a suspension. The Ball In Cup must be treated with respect at all times. BICL participants need to handle the Ball In Cup with care. The type of care one uses when holding a newborn baby. Not only out of respect for the game but also because there’s a crack on the side of the Ball In Cup. KFC knows about the crack on the side and yet he still whipped the equipment around with no regard for it or the other players who play this beautiful game everyday. God forbid he had done something to make the crack bigger.

The very fact that there’s controversy surrounding whether or not he made a second attempt (he didn’t) is partially why he’s been suspended. KFC is no stranger to controversy since BICL’s inception a few short weeks ago. On the day before Thanksgiving I was sent a video from KFC of him at the office taking as many Ball In Cup attempts as his heart desired. He also said the words, “Fuck you Trent” in that video. That’s how he got his original suspension. KFC’s troubled BICL past, and the way he whipped the the Ball In Cup around after today’s attempt, are what led me to suspending him this time around.

I didn’t give KFC the suspension. He gave it to himself.