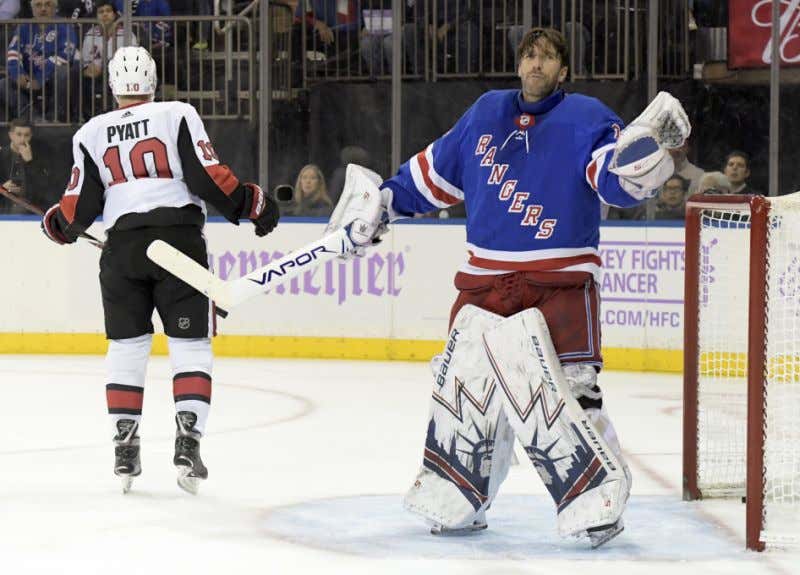 What a roller coaster ride these first 32 games have been. Overall it doesn’t look so bad sitting just 3 points out of 3rd in the Metro – but if you take out their highly unsustainable 9-1-1 run from Halloween to Thanksgiving, the Blueshirts have been exactly what a team that recently sent a “we’re tearing it all down” letter to their fans. A steaming pile of 5-12-4 crap that’s been outscored by 26 & outshot by 133. Yikes.

It shouldn’t be much of a surprise though. Everyone knew it would be a process & it’s still very much in the early stages – but if you’re a Rangers fan watching these games every night, it’s not as easy to accept as I thought it might be. The 9-1-1 stretch certainly gave some false hope, but they continue to tease on a nightly basis by piling up multi-goal leads only to blow them. In 3 of their last 5 games they’ve given away multi-goal leads (although they got away with it once vs FLA). Looking back even further, they’ve been up by a pair or more in 6 of their last 11 L’s. Part of the growth of a young squad is to learn how to win – I get that – but pissing away significant leads so often is a real painful way to do it.

Forget the negativity though. It’s the holidays so let’s be merry. Here’s my 5 positives for the NY Rangers so far despite what’s shaping up to be an ugly 2019.

I’m putting Hank 5th because he’s the most obvious answer – but if you’re thinking #LoseForHughes, he’s kinda being a real dick keeping his team in games they have no business being in. He’s had a rough 4-game stretch where he’s ceded 17 goals, but outside of that slump he’s been lights-out despite a nightly barrage. Through his first 21 games he only had 3 where his save percentage dipped below 90% & only 5 below 91%. For the amount of pucks that come his way, you could easily argue there’s only 2 other netminders in the league that have been better: Andersen & Gibson. There’s still plenty left in the tank when the 36 year-old continues to make ridiculous saves like this almost every start while his defense gives away top-notch chances then stands & watches:

Just like a lot of his players, coach Quinn is learning the NHL game. As far as how he’s managing his squad and holding individuals accountable regardless of experience or contract, I love it. What Quinn is trying to do is establish an identity for this team where they understand that every single positive on the ice is derived from hard work & fundamentals. It’s certainly had an impact. Buchnevich looked like a kid who just wanted to coast by on his skill & only seemed engaged whenever the puck found him. After some scratches, benchings & 4th line assignments the light has seemingly come on. It’s apparent to the eye that Buch is no longer waiting for the puck, he’s going after it. He’s battling harder, back-checking more – and what’s the result? 16 minutes a night of top-6 ice time & 4G/4A in his last 8 games played. Same goes for 19 year-old Chytil, who’s still got a long way to go to reach his projected ceiling but is clearly starting to reap the offensive benefits of getting his nose dirty. Development IS happening, and a hands-on, no-nonsense coach is a big reason why.

Is Pionk a top-pair defenseman? On most teams no. But he’s taken full advantage of the opportunities provided by the failings of his teammates around him. Shattenkirk was supposed to QB the PP. Skjei was supposed to be their next McDonagh. Instead, they’ve both disappointed while the undrafted free agent soaks up 5+ minutes of special teams a night now. You could argue that he shouldn’t be seeing 23 minutes per tilt and you’re right – on a good squad, which this is currently not. Fans have to remember though he was an UNDRAFTED FREE AGENT who’s got just 58 games of NHL experience so far. Their return on investment with Pionk is through the roof and if/when the Rangers return to being a competitive team, they’ve stumbled upon a kid they can count on in their bottom four. That’s quite a discovery & fans should be happy he’s here.

Man, I loved this acquisition when it went down a couple years ago. Mika was just 23 & had a 50-point season under his belt already. His first two seasons in a Rangers sweater weren’t exactly inspiring (thanks in part to a broken leg that derailed his debut after 15 points in 19 games) but the 25 year-old Zib seems to have finally broken out. On pace for over 70 points and that’s including some pretty poor puck luck – he’s gotta lead the league in posts rung. Besides the offense, Zibanejad is excelling on draws (as usual) & has brought back the physicality he played with in Ottawa. He’s become their go-to guy and I wouldn’t be surprised to see him sporting a “C” next year.

This guy has been an absolute beast. 23 points in his last 21 contests but more importantly, the confidence Hayes is skating with is nothing we’ve ever seen before. His hands & vision are insane. His shot (when he decides to fire away) is marksman-like. He’s using his size to create separation along the boards & continuing to play an excellent 200-foot game. Being a plus-7 on this Blueshirts squad might as well be plus-700. The former first-round pick of the Blackhawks is putting it all together in a contract year and showing exactly what the Hawks thought they were getting when they selected him 2 picks ahead of Kuznetsov (oops). As the story goes he didn’t sign with Chicago, landed in the Rangers laps & has peaked just in time to trade away.

I love what Hayes has become. Kid is a certified stud and in a perfect world I’d love to build around him & Zibanejad for the next few years – but you’ve gotta look big picture. Look at what the Rangers currently are. They’re a couple seasons away (if they’re lucky) from being a team that needs to be taken seriously by the likes of Toronto, TB, Washington, etc. The Rangers could’ve had Hayes on a multi-year deal for a reasonable price if they wanted to this past summer, but let’s say they’ve changed their minds & ink him for 6 years/$6M per. Let’s also assume they’re ready to contend after 2 more seasons. That means NY wasted 2 years of his prime and now, when it matters most, Hayes is almost 30 years old. It doesn’t make sense to spend that money if you’re a team that needs some pretty good fortune to ensure the first half of the contract isn’t essentially a waste. He’ll arguably be the most coveted trade chip this year & could easily net the Rangers a first & a solid prospect if not more.

This is a rebuild. Don’t forget that. Just because Hayes has gone bananas for 21 games doesn’t mean the Rangers need to make an expensive commitment to him. It just means the return in the next couple months will be that much better. I bet Hayes would love nothing more than to stay in NY with his BFFs but the timing simply isn’t right. Truth is, for as awesome a Blueshirt as he’s becoming, his success serves this franchise best in a blockbuster trade. A trade which, assuming Gorton doesn’t flop, could be the best thing to happen not only this season but the next few.