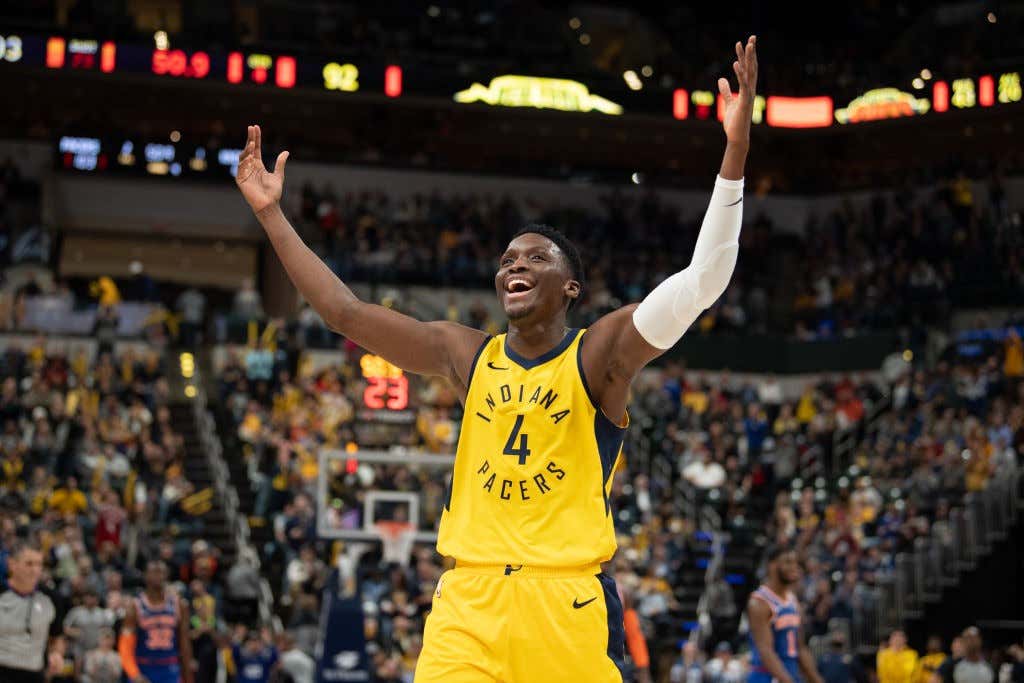 When you ask most casual NBA fans who they consider the contenders to come out of the East you’ll most likely get a list of teams that include the Toronto Raptors, Milwaukee Bucks, Boston Celtics and Philadelphia 76ers. The Raptors make sense, they have a healthy Kawhi and the league’s best record. The Bucks you could see because they have an MVP candidate and got off to a great start. The Celtics could be that team given their total collection of talent and solid coaching. You could also make the case that the addition of Jimmy Butler as a legit clutch time scorer gives the Sixers that edge to get them over the hump given how unstoppable Embiid has been this season.

What you won’t hear are too many people talk about the Indiana Pacers, and that’s becoming more and more foolish as the season goes by. I touched on this quickly in this morning’s blog, but there are stoolies out there that love this Pacers team and they deserve a full blog about their current 7 game winning streak which is not only now the longest active streak in the NBA, but has them just 2 games back of TOR for the top spot in the East.  If you weren’t taking this team seriously before, it’s now time you start talking about them as a legit threat to come out of the East. I wanted to see what has gone into this streak and how they’ve been able to do it while missing their best player for over half of it, and this is what I found.

For starters, here are the teams that the Pacers have beaten over the course of this streak: CHI/ORL/SAC/WSH/MIL/PHI/NYK. That’s a list of teams with a combined 97-111 record, but at the same time is 4 current playoff teams and then a Wizards team that probably finds its way into the top 8 when it’s all said and done. Not a murderers row by any stretch, but guess what, every team who goes on these long streaks has some cupcakes. The Celtics had it, during the Raptors 8 game streak they beat teams like CHI/ORL/ATL/CLE. During the Warriors 8 game streak they had PHX/NYK/CHI/BKN, so I will not hold that against the Pacers. They have beaten the teams on their schedule and they’ve done it without their best player which is exactly what you want. When Oladipo came back for MIL/PHI/NYK, nothing really changed, they kept on winning. So even though there were some easy ones in there, if we’re talking about how this team stacks up against the best of the East, these last three wins which included two other contenders cannot be ignored.

Here’s the thing, when Oladipo went down on 11/17 and missed the next 11 games (12 really because he played just 5 minutes in that game against the Hawks), the goal for the Pacers had to be to just tread water. They went 8-4 over those 12 games and nearly went 9-3 which certainly told us they were not just going to slide down the East standings, but that this team was resilient and had the depth to stay afloat until Oladipo got back. If you look at the 12 days of this streak we see a couple trends. The first being the Pacers are playing the best defense in the NBA over this span. What’s the easiest way to get by without your best player? You defend your dick off. The Pacers lead the league with a 97.4 Drtg over the course of this 7 game winning streak, while also owning the second best net rating, trailing only the Celtics who just had a long streak of their own. You look up and down this roster and they are getting legit defensive efforts from everyone, even Myles Turner! 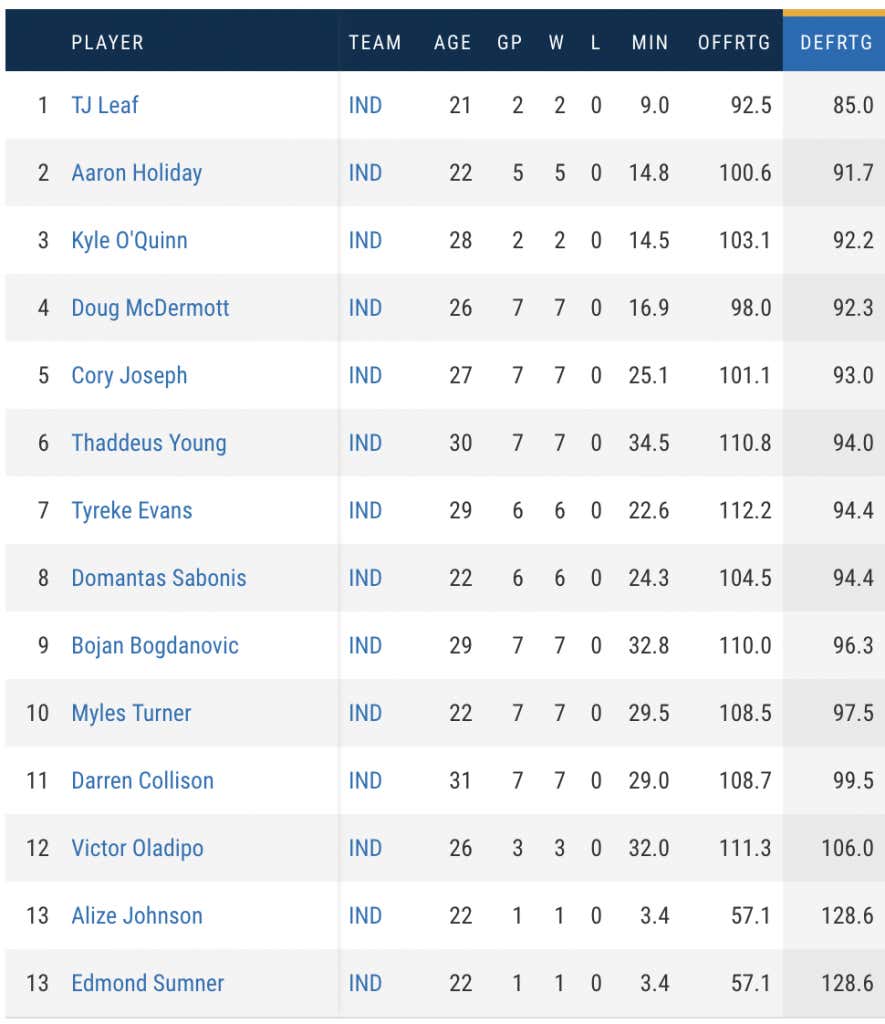 During this streak the Pacers have held all 7 opponents to 101 points or fewer which is no joke, and part of that is because they are getting plays like this

When you look closely, you see that the root of their success is coming from their defense because offensively they’ve been average, ranking 15th in Ortg. What’s unique about that is despite the average ranking, they are playing the right way when it comes to moving the ball. An assist% of 68.4%, that’s good for 3rd in the NBA which tells you that they were able to adapt to a different style of play while Oladipo was out. We all know he’s an isolation God, but if you’re telling me this team can defend at an elite level and is capable of moving the ball at this rate, then yeah they have to be taken seriously.

Another huge reason for their success has been the play of Bojan Bogdanovic. He’s in the last year of his deal at $10.5M, and his 18 points on 48/41% splits with 2.0 3PM over this streak has been gigantic. They needed someone to step up the scoring with Oladipo out and he’s the first place you should look. For a team that ranks 27th on the year in 3PM, his ability to be a consistent outside threat as of late has made all the difference in the world. When you also factor in the quality of player in Sabonis that they are bringing off the bench, it just speaks to this team’s depth. Having players like Sabonis/Dougie McBuckets/Holiday/Joseph off the bench is a legit second unit, and it’s why they have the 9th best scoring bench in the league. It gives you a legit post option in Sabonis, some shooting with McBuckets, and then solid guard play from both spots. Here’s something I bet you didn’t realize, but of all the teams (TOR/MIL/BOS/PHI), it is the Pacers that have the highest scoring bench that also shoots a ridiculous 48% which is the 2nd highest in the entire NBA after the Warriors.

So, not only has this team shown they can defend at an elite level, not only have they shown they can beat the other elite teams in their conference, but they also have the best bench production in the conference so far this season. Isn’t that exactly what we say about a team like TOR when we talk about how they can be a Finals contender? We know Oladipo can bring it in the playoffs, he nearly beat LeBron by himself, and if you look at all of the criteria some of those other East contenders need in order to be considered for real, how can you argue the Pacers don’t check those same boxes? They are tied for the 3rd most road wins in the East, have the best conference record at 14-3, and a point differential that is a full +3.0 points better than the Sixers at +5.5 which is close to both BOS/TOR (7.4/7.5).

So the question now becomes how far can this streak go? Well they play CLE up next, and then face TOR for the first time this season so that’ll be great to see as another measuring stick game. After that though, things stay light with BKN/WSH/ATL/DET/ATL/CHI before another date with TOR at the beginning of January. If Oladipo is able to stay healthy it’s fair to think that this team’s level of play won’t drop off that much for the next few weeks.

Not many people were talking about the Pacers heading into the season because let’s face it they aren’t the type of sexy team that ESPN loves to talk about. They don’t have the talent of a BOS or TOR and don’t have the personalities of a MIL/PHI. All they do is bring the noise on defense night in and night out and just grind out wins. Now they’re sitting as pretty as anyone in the East and it’s time we give them their proper credit.