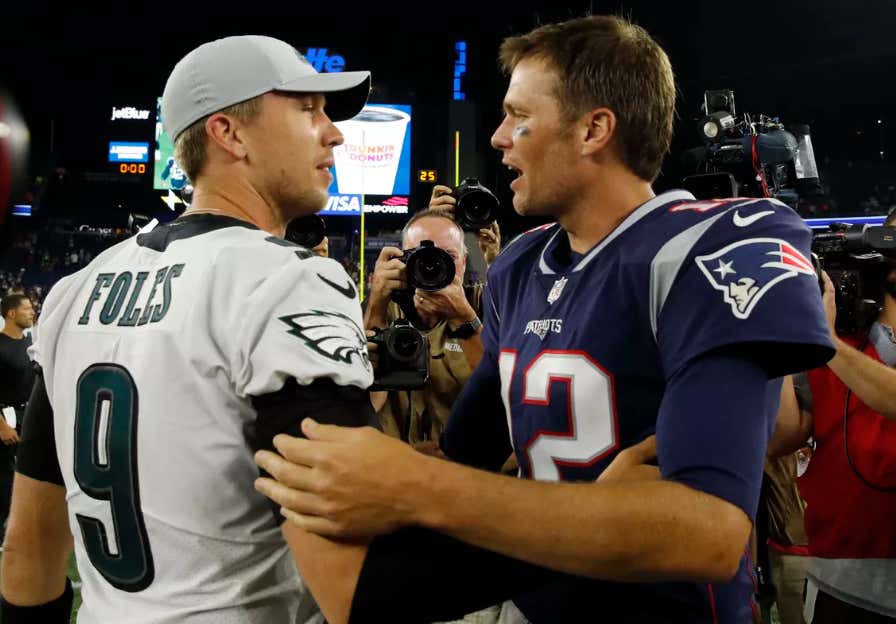 Our fearless leader El Presidente posted a blog earlier asking if the Eagles should trade Carson Wentz because Nick Foles was Super Bowl MVP last season and the Eagles won last night vs. the Rams! A fair point! Nick Foles IS the defending Super Bowl MVP and is 2-1 this year as a starter! 2-1! That means Carson Wentz did NOT win the Super Bowl MVP last year and is 5-6 as a starter in 2018! GAZOOKS! Common sense says Nick Foles is greater than Carson Wentz in every way possible! Overall career record, age, dick size – You name it! If Davey says Foles > Wentz then that’s the truth and we’re all sticking to it! Forget about the logic that fake Philly pussy brings to the table:

Smitty’s an IDIOT! This is Barstool SPORTS which was founded by Dave Portnoy! He knows his SPORTS! I don’t care if Wentz has the tools destined for an all-time career, was the leading MVP candidate last season who led the Eagles to a 10.5-2 record until he got hurt, and was playing with a recovering ACL and broken freaking back for most of 2018! Foles for daysssssssss and hopefully yearssssssss!!!

However, since I, CBS, am the biggest Go Pres Go entity found outside of your nearest Discovery Zone, it’s my duty and honor to look out for Davey and his Pats! If Nick Foles is as good as The Lord Of The Pageviews claims, why shouldn’t the Patriots scoop him up for a playoff run?!?!?! By Davey’s logic, Foles HAS to be better than Tom Brady, right?!?!? Let’s take a look at the intangibles! ICYMI: Nick Foles beat Tom Brady in the SUPER BOWL! We knew that! But did you know that in his last two games, Tom Brady is 0-2! Foles? 1-0 in his last one game! HOLY SPANK ME BATMAN! The Patriots need to trade for the HOT HAND and trade for him – STAT! Speaking of HANDS, Nick Foles also has better mitts than Tom Tom!

Holy moly is there ANYTHING that Tom Brady is better than Nick Foles at?!!?!? At the moment – NO! And right now is all that matter! Who cares Tom Brady has 5 rings overall! What has he done for anyone LATELY! Nick Foles is 1-0 in his last game and SUPER BOWL MVP over Tom Brady! If he’s good enough to start over Carson Wentz, he’s immaculate enough to lead the Patriots to another title! Pull the trigger, Robby and Billy! PULL IT! Get yourself the Super Bowl LII MVP and guaranteed future Super Bowl LIII MVP in Foxborough before he wins it for another team! It’s DESTINY!