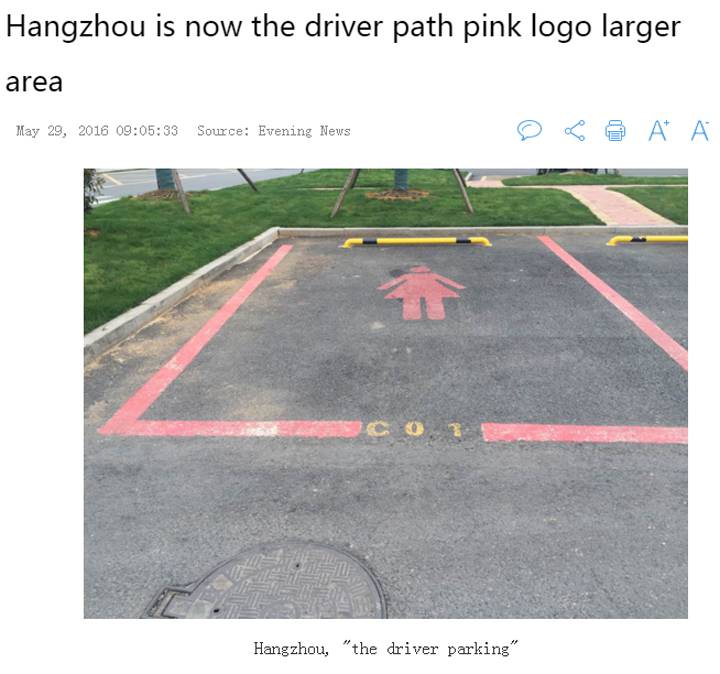 CHINA - A number of Chinese parking lots connecting Zhejiang province to Jiangxi province in China’s southeast have sparked outrage after introducing “female only” parking spaces that happen to be much larger than those not assigned to a particular gender. The spaces, designated by pink paint lines and the international symbol for woman, are 50 per cent wider than other spaces in the service centres. The reason – because women are allegedly bad at parking. According to China’s Qianjiang Evening News, Pan Zhuren, director of the service area, said he decided to include the girls-only spaces after noticing that some female drivers were having trouble reversing into parking spots, or “parking carelessly.” According to the report, the female only parking spaces were added to several lots in March, but have only recently stirred up outrage on Chinese social media sites, according to Quartz. “True respect for women entails letting women enjoy the same rights as men,” said one user on Sina Weibo, the Chinese equivalent to Twitter.

Stereotype: Confirmed. The only question is if these spots will still be large enough. An Asian woman driver behind the wheel is essentially a rouge missile flying off coordinates. Damn thing could take out everyone and anything in its path. If a 3-point-turn is done under 30 revolutions it’s considered a miracle worthy of Sainthood. Maybe, just maybe, Donna Chang can back into one of these spaces before the battery runs out. But typical women. Give them the world and they’ll always find something to complain about. Hey Far East Fur Pies, you’re essentially getting handicapped parking while only being slightly disabled. Large, reserved spots solely because the pixilated sideways slit between the legs for whatever reason inhibits your driving abilities. You want things to be equal then start acting like it. Until then, enjoy the perks.

BONUS: 10+ minutes of women drivers in action. Watch at your own risk.