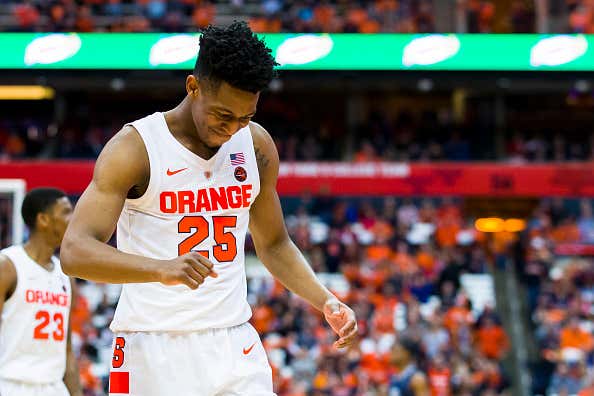 Coming into the year, plenty of people had Syracuse as a top-15 team. If you did not, Syracuse fans let you know that you were dumb, stupid and a hater. How could they not be top-15, Syracuse fans asked. It made sense. They were coming off of a Sweet 16 and returned the entire roster led by Tyus Battle and brought in a key transfer and a fairly big recruit. Things were supposed to be different.

Through 10 games, things are not different though. This feels like a team that is just going to continue to struggle on offense, rely on Tyus Battle bailing them out late in games and be the most frustrating team in the country. So let’s get into what’s happened to Syracuse that has led to a 7-3 record after a home loss to Old Dominion.

First things first, you have to start with the preseason expectations. It’s why I was hesitant to move Syracuse in the top-20. I’ve said it numerous times and I’ll say it again. Don’t judge the NCAA Tournament as the basis for a team that is returning a good amount of the roster. Remember, Syracuse was arguably the last team in the NCAA Tournament. It got hot for three games with the upset over Michigan State, so that’s what most people remember. People fall into the trap of basing a team success and future success over the NCAA Tournament. It’s a terrible way to judge a team over 35+ games. Syracuse should have been judged as somewhere in the middle of the last team in vs a Sweet 16 team.

It’s not even like Old Dominion is a bad team. But, this game was played at the Carrier Dome and I’m looking at Syracuse’s season as a whole. They have the quality win at Ohio State. But, other than that? The next best win is a home win on a buzzer beater from Tyus Battle over Georgetown. But, watching this team a few things stick out.

Oshae Brissett needs to be more consistent. He was the player so many people looked at as a breakout guy this year. He was the 3rd guy last year joining Battle and Howard, especially during the NCAA Tournament run. This year? He’s been fine, but hasn’t taken the jump to be a possible All-ACC player like some thought. The biggest number I see is in games against KenPom’s Tier A&B teams he has an ORtg of 88.6, his total ORtg is 103.6. Last year against A&B teams he had an ORtg of 101.9. That has played into some of the losses. Against Old Dominion he was 3-for-11 from the field with 3 turnovers and had an ORtg of just 59. That absolutely can’t happen with how limited Syracuse is offensively.

Syracuse desperately needs someone to be a consistent shooter. That was supposed to be Buddy Boeheim, but he hasn’t been able to see significant minutes. Elijah Hughes was supposed to help with the shooting and while he’s taken the most attempts, he’s shooting just 34% from three. As a team Syracuse ranks 299th from three (29%) despite taking threes on 40% of field goal attempts (122nd in the country). Part of this is the ISO offense that Boeheim uses. He has guys that like to get to the midrange and pull up or try and get to the rim. But, with the amount of threes they are taking this year, there has to be someone that can consistently hit shots. Without that happening, teams can sag back, take away the offensive rebounds and focus on taking away Battle as much as possible. If Battle has the ball teams can start to help out more and play more guys in the lane forcing Battle into long twos.

Finally, if Syracuse isn’t going to get anything from Paschal Chukwu and Bourama Sidibe, just play Dolzeaj at the 5 spot. Give a different look, which I know is tough for coaches to adjust and do such a thing. But, you can play a combo of Brissett, Carey, Howard, Battle, Hughes with Dolzeaj. The zone will still hold up, it’s the 2-3 zone. You have good enough rebounders from the wing spot. This at least makes the offense more fluid. That’s the major problem. The defense is more than fine. They need to find a way to improve the offense. Don’t be afraid to go ‘small’ here. Dolzeaj can run pick and pops and is a decent passer for a big. You can spread teams out more with the 4 guards/wings and let Battle attack more.

There’s still obviously a ton of time left for Syracuse to fix the offense and look like that top-20/25 team. But, they have to figure it out quick because undefeated Buffalo, who is a top-25 team in the country is coming into the Carrier Dome this week. A loss to Buffalo and you’re looking at a nonconference with 1 quality win and 4 losses. That’s how you end up in Dayton for the NCAA Tournament.