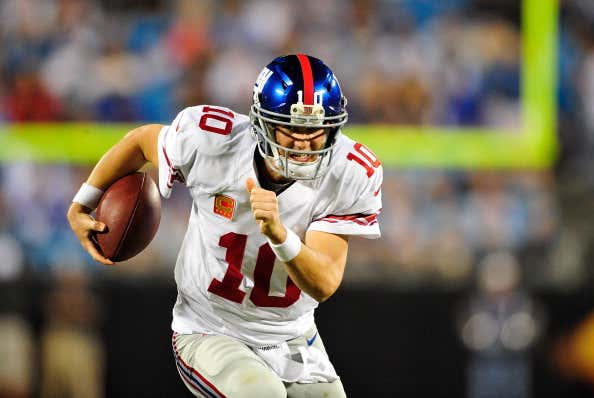 Goooooooood morning Giants fans! It’s Week 15 of the NFL season and Big Blue is still alive in the playoff race.

It may not have been easy or fun to get to this point, but considering how this season started, I will take being mathematically alive for the postseason if tanking for the number 1 pick wasn’t going to happen. Especially since the Panthers are free falling with a Cam Newton that appears to have an injured wing, the Eagles are doing the same with a Carson Wentz that definitely has an injured back no matter how little the Philly medical staff wanted to admit it, the Vikings just fired their offensive coordinator, and the Packers just fired their head coach. To be honest, the biggest reason I want the Giants to make the playoffs is so Eli can shove it into his haters faces one last time. And because my dumb Giants fans brain thinks we could have another unlikely run to a Super Bowl title because of what the franchise has done to my mind, body, and soul.

Unfortunately for the Giants, they are going to have to beat an actual starting quarterback against the Titans in the Mythical Gigantic Human Bowl after getting wins against Mark Sanchez, Chase Daniel, Nick Mullens, and Ryan Fitzpatrick (post annual Fitzmagic phase). Marcus Mariota is not exactly a Pro Bowler, no matter how little that means these days, but he can be a pain in the ass to defend because he can move the chains with his arms and his legs. Derrick Henry looked like the 6’10, 285 lb. running back built out of granite we thought he would be after running all over Ereck Flowers current employer last Thursday and eliminating some poor unsuspecting souls from the first round of the fantasy playoffs before the matchup even really started. It’ll be interesting to see how much the 22nd-ranked rushing defense in the league will want to tackle an actual living, breathing titan on a rainy December day. Anybody who has watched the Patriots the last few seasons knows how shifty Dion Lewis can be and if Good Corey Davis shows up instead of Bad Corey Davis or Meh Corey Davis, the Titans may actually be able to move the ball through the air.
lsvgnvsgm;macesc2

Sorry, about that. I fell asleep on my keyboard thinking about the Titans offense. Bottom line is this game won’t be a cakewalk for the Giants defense as it was taking on The Sanchize last week. Tennessee can and will milk the fuck out of the clock and make this likely ugly game even uglier and shorter if they are able to convert first downs.

On offense, it looks like the G-Men will be without Odell Beckham for another week after that leg whip he took against the Eagles that wasn’t called since the refs were off that day. However we can spinzone all this and say that Pat Shurmur is just resting Odell for the playoffs. So once again Saquon Barkley will have to shoulder the brunt of the load of the offense, which he has done a pretty good job of considering he is averaging 134 yards from scrimmage during his rookie season despite a shitty offensive line. The Titans defense is 4th in the NFL in points allowed. But they haven’t seen a freak of nature that can do shit like this yet, because Saquon is the only football god on the planet that can pull off some of these moves.

Even if the Titans are able to contain Saquon, Big Dick Rosas should be able to boot a field goal from pretty much anywhere inside the MetLife premises in what I imagine will be a pretty close, low-scoring game.

Anyway, I am just happy the Giants are still mathematically alive as I decorate my Christmas tree at the Casa de Clem this year. Lets go Giants, Bears, Dolphins, Rams, and Saints this week to get us one step closer to 8-8 and a rematch against Khalil Mack and the Bears in Chicago (who for the record the Giants beat a couple of weeks ago).

Or at least get us in the In The Hunt graphic by next week.