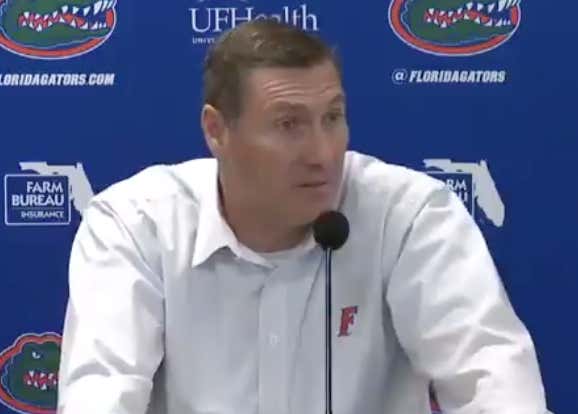 Throughout their last 25 games, UCF has:

-won every single one

-Started a nationwide conversation over the current college football landscape

UCF has without a doubt been good for college football. In a sport that is incredibly top-heavy, they’ve developed a voice for the little guy. The only thing is, UCF has kind of been annoying while doing it.

If the claiming a national championship thing wasn’t enough, UCF and their fans have consistently argued their low ranking strength of schedule isn’t their fault. Nobody wants to schedule them! We call these P5 schools and they are afraid to put us on their schedule! Their tails go between their legs!

“Two-for-one”=Florida gets two home games against UCF and UCF gets one home game against Florida.

Do we know for sure if Florida offered this to UCF? No, but if they did, I’m not sure what UCF was expecting. Every G5 team in America couldn’t have said yes fast enough to a 2-for-1 series with an SEC team like Florida.

This tweet is from a UCF blogger, but I think it’s the thought process of a lot of UCF fans out there. Thinking that Florida isn’t the best program in the state is laughable. Yes, UCF hasn’t lost in over a year, but let’s not forget UCF is just a few years off of an 0-12 season and currently sit in a conference with the likes of UConn and East Carolina. I’d argue that UCF is the 4th best college program in Florida, behind UF, FSU, and Miami.

Here’s the thing, UCF can continue to schedule like they have been doing. Play the likes of Pittsburgh, Maryland, and Georgia Tech and then go dominate the AAC. Have your shot at an SEC/Big Ten team in the Peach Bowl and call it a season. That’s great, nobody is going to care. Just don’t stomp your feet like a child when you don’t get a look from the CFP committee.

How does a UCF make the playoffs? You have to schedule the likes of Florida, Florida State, USC, etc. Without a doubt you will lose a couple non-conference home games, but if you think you have the talent to compete at a national level, time to take some risks. It’s unfair, but that’s how this thing works for G5 teams, unfortunately. You either do that or you just wait and hope for a P5 conference to call during the next expansion cycle. Has UCF ever scheduled a great P5 program? Yes, they have. It didn’t go great!

To me, UCF is your buddy who always talks a big game at the pregame, but chooses not to go up to the hot girls at the bar. Why? Well, he’d rather live in an “if” world instead of a definitive world, because the “if” world doesn’t feature the high potential for the pain of rejection.