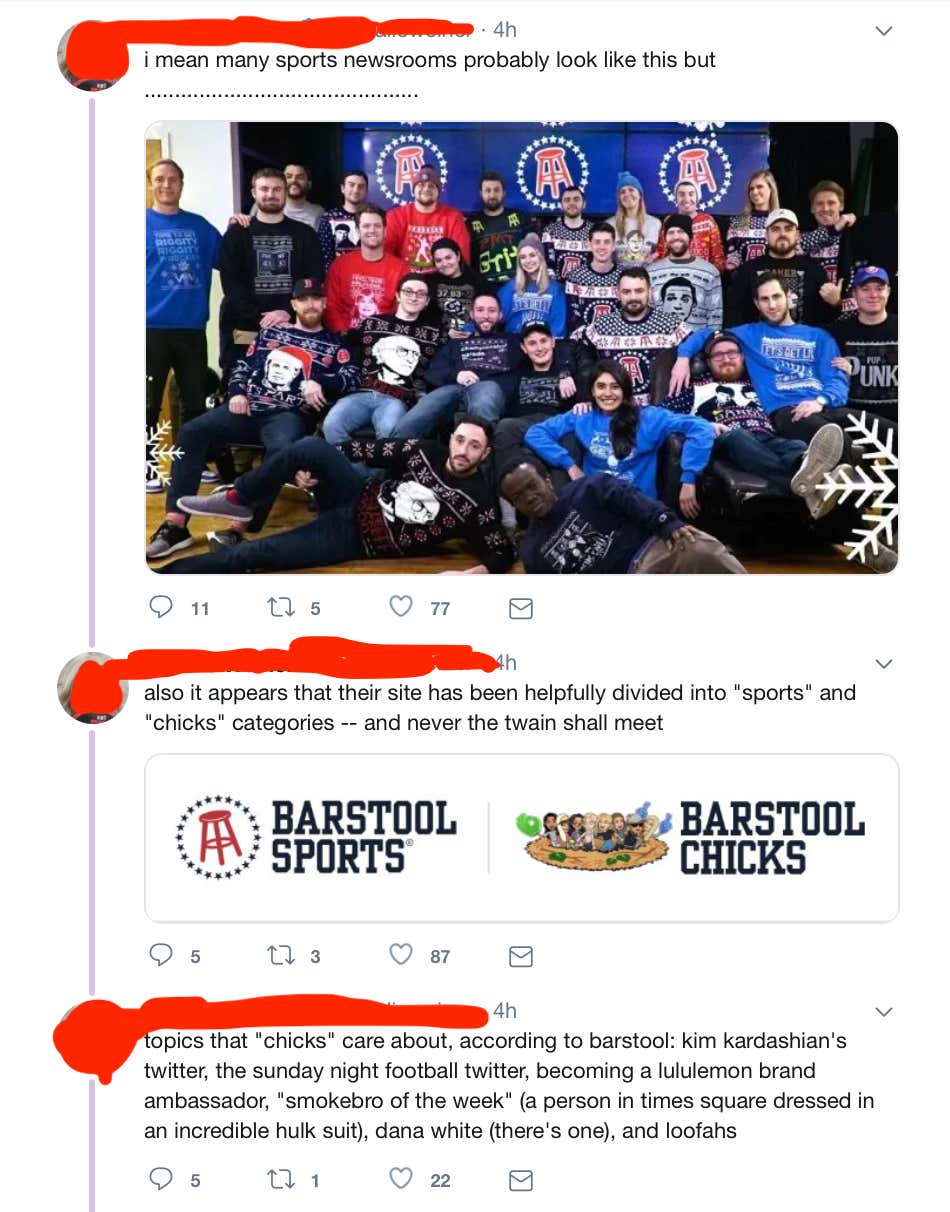 I think a few main reasons I’m posting this are 1) someone tagged me in the posts and I got #triggered because they clearly didn’t like the highbrow genius of my extremely serious Smokebro idea, 2) I’m waiting to pick my cousin & his girlfriend up from the train station so I’m not going anywhere for awhile and 3) I love working here & wanted to address a couple things & 4) the ‘sports writer for another site being mad at Barstool’ thing just feels hacky & tired & it stinks.

As for their first tweet, I agree. It probably does look like a lot of board rooms and writers rooms, whether its sports, comedy, news, whatever. As we grow & learn, and we are growing rapidly, I’m sure that’s something we’ll continue to focus on. Hiring from a wide array of backgrounds is a win/win and a wider frame of experience is invaluable for any company, especially if you’re in the content game. Yes, it’s the right thing to do but it’s also the smart thing to do, and more & more it is something we’re doing.

Worth noting at the same time, this photo doesn’t show the full content team or anyone at all from the dozens & dozens of the excellent men & women on the business, sales, engineering, merchandise, etc. side of things. But if you’re going for an easy knee-jerk reaction tweet, excellent job.

Onto tweet two, the Chicks page. I have to admit I, too, was extremely skeptical of this at first because I also thought it meant ‘never the twain shall meet’, but if you did a little more research (please give us those sweet, sweet page views) you’d see that’s not the case. Many of our blogs go on both sites (I’d say 98% of mine are on both) but the ones that we feel don’t fit the vibe of the main page go on Chicks.

And this isn’t really mind-blowing or scandalous so I don’t get the fuss… Tons of sites have women’s pages as an offshoot to the main.

(Really showin’ ‘em with The Huffington Post as an example, Kate.)

Again, easy to point down from your high horse at our topics… Kim K. (am I disappointing you by being a woman who cares what Kim K. does? Because yes it’s 100% pathetic but I absolutely am interested in what Kim K. does & a lot of other people are, too, and that’s why Kim K. is Kim K. so what’s the issue? Also, her sisters love basketball players so it’s sports adjacent or something like that), Sunday night football (that sports thing), Lululemon (a sports brand), my smokebro of the week (I just want to objectify men & this was my first try & it was definitely weird but I’ll work on it I swear), Dana White (also sports) and loofahs… but was that tweet supposed to get people riled up over those subjects? Is it that weird that those things would be on a women’s site?

There’s going to be growing pains as we figure out exactly what direction we want to take with Chicks. I’d love to see the page add more coverage of women’s sports & accomplishments with the big stories going on both pages, and again, I think that’s something we’re going to see. And I know other women here who have great ideas for new things they’d like to try out there, too. The page is pretty new and we haven’t even had an official announcement for it yet as we feel it out (so thanks for blowin’ up our spot, sheesh).

We’re not afraid to put ourselves out there & see what sticks & what doesn’t, we’re not afraid to make mistakes publicly & learn from them (sometimes deservedly) painfully publicly, and we’re clearly not afraid of success, of which we’re having plenty. Despite a lack of announced rollout yet, the Chicks page already accounts for a huge amount of new viewers & we get plenty of crossover from the other page. People can be mad all they want, it’s working for us.

I also noticed other tweets where this person is upset about the Smokeshows of the day. All of those women gave the green light to be featured. That’s what they, women with vaginas just like you and I, wanted. Either they, or their partner or a friend, nominates them/selves. And, another tale as old as time, some guys & gals like boobs & models. It is what it is. 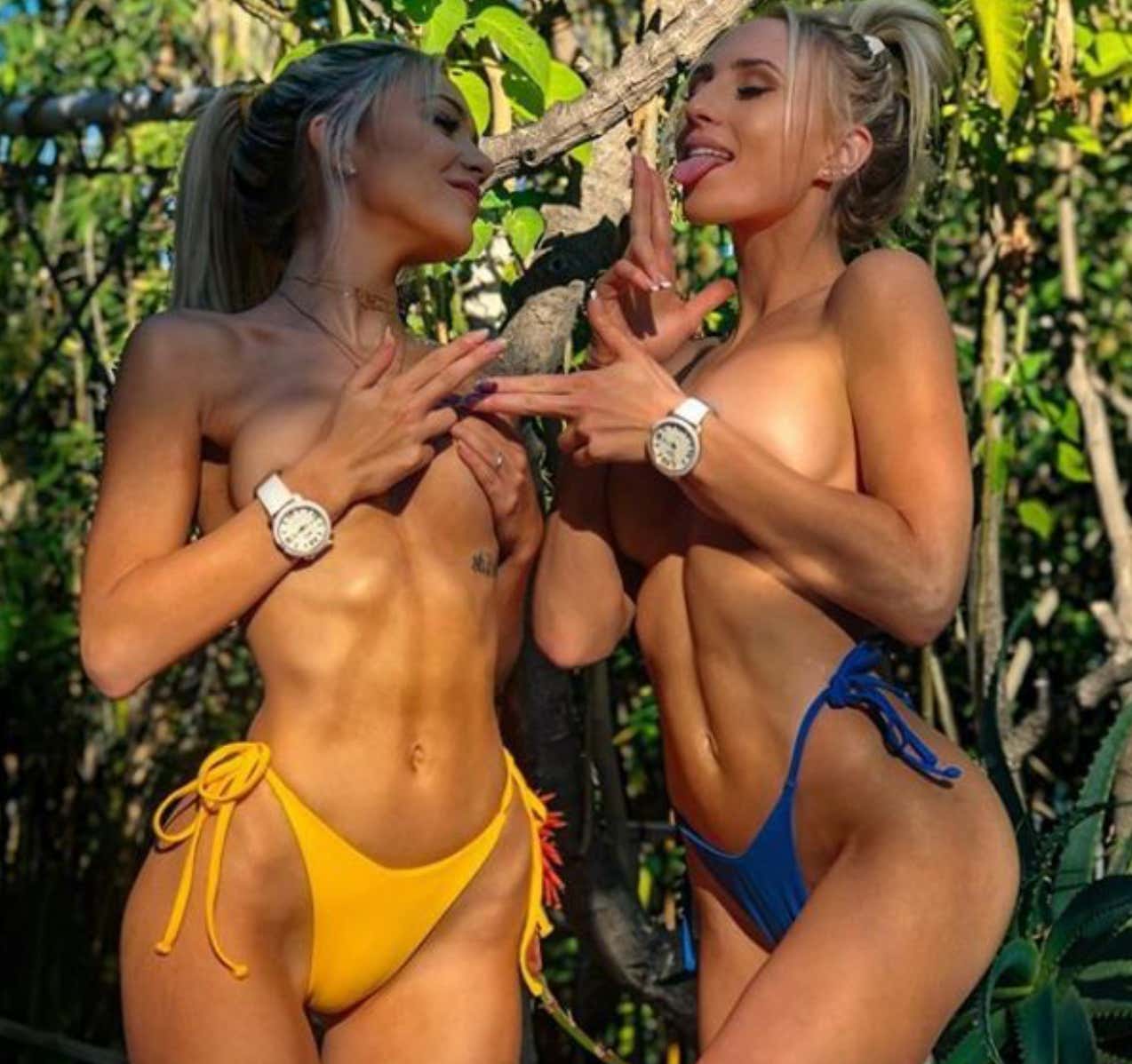 As for me, not quite a smokeshow but here my looks have never mattered. Barstool hired me as a nobody last year & now I’m on national radio, two podcasts, original videos, daily blogs, I advocate for mental health awareness (no shame to the game), I work with other women I admire greatly, including my CEO, & never once has my gender come into play when I have a harebrained idea to create something, and I do it all with a snaggletooth & bad hair. Despite being in a highly visible job I’ve never been told to lose weight, to wear makeup, to brush my hair, to stop wearing sweatpants to work… (this is making me realize I really need to get it together, thanks). My coworkers have always just supported me for being me & this is the most comfortable & excited for my future I’ve ever been in any workplace.

I’ll end it now because I feel like I’ve already lost by wasting time on this on a Friday night (very cool, Kate), but it was worth addressing to me. No, it’s not perfect. No company is perfect. But we’re transparent, honest, open & I love this place. As a final note, I also think this person has been so busy focusing on surface level knee-jerk stuff that they overlooked the environment we foster for shorter people. Top notch.

Whoever we are, Barstool lets us be as big as we wanna be.