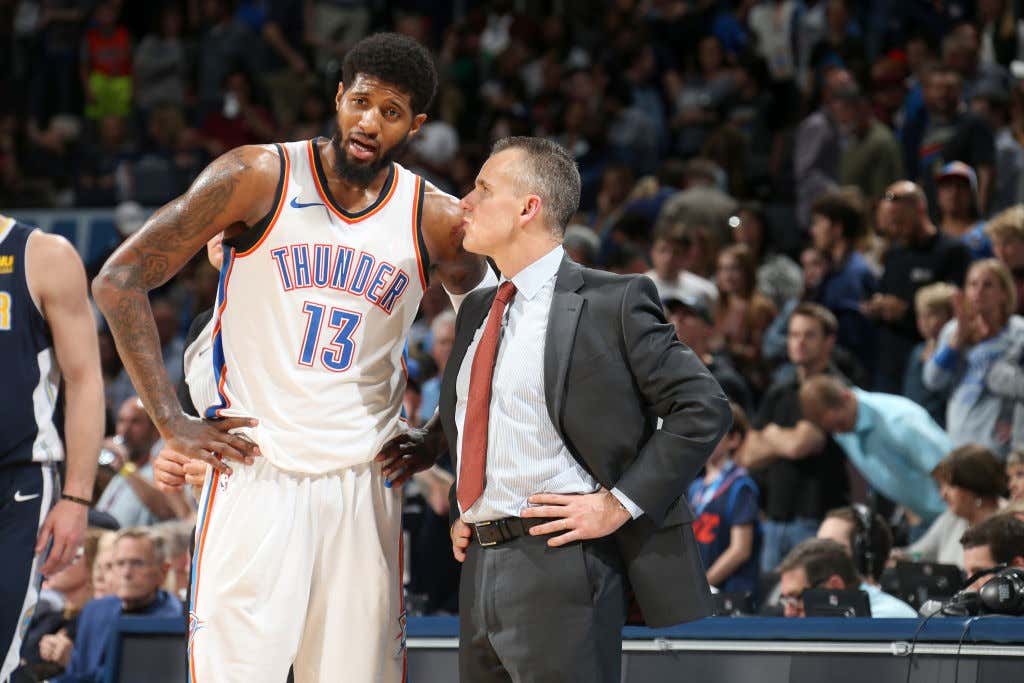 But Donovan would quickly learn to let George just do his thing on the court.

“I’ve always been a guy to just let the game come to me,” George told ESPN’s Royce Young. “Just play the game. If it’s a shot for me, if I can make a play, create for someone else, I’ll do that. A lot of times you run a play, everybody’s watching, everybody’s locked in, everybody’s pulling over and it just makes the game tougher for me.

“I like it when I can kind of manipulate and be on attack mode where they don’t know what to do, as opposed to a play other teams [can] scout.”

That meant there was an adjustment for the coach.

“At times he’s like, ‘Stop—just let me get it,'” Donovan said, per Young. “I had to learn him. I can watch things on film and say, ‘Oh, that’s a good play and he made that shot, let’s run that,’ but there’s a lot more to it than that.”

Ultimately, though, it was an approach that allowed the five-time All-Star to excel.

Pretty interesting story coming out of OKC that I feel is pretty unique. How rare is it that a player of George’s caliber straight tells his coach to stop running plays for him? What is the one thing we always hear when it comes to this team, that playing with Westbrook is impossible because he doesn’t let anyone get shots, and that it’s on Donovan to make sure everyone gets fed. Normally, when you’re as good as George is you come with a certain expectation as to how you are going to be involved and your role in the offense. It’s pretty interesting to me that he straight up told his coach to not even worry about it, don’t try and force things by calling plays for him just so he could get his opportunities and honestly it makes some sense. George feels he is at his best when he can improvise, and I think that mindset is why him and Russell Westbrook have been successful as teammates. It’s why the don’t have that “my turn your turn” problem you see a lot of the times when stars pair together, and it’s something that may have been problematic for the Thunder in the past.

The results speak for themselves. George didn’t just have a great year last season, but now that he’s committed to OKC long term he’s actually having arguably the best season of his career.

Not only is he averaging a career high in points (24.3), he’s also averaging a career high in 3PM (3.5), rebounds (7.9), assists (4.3), steals (2.2), blocks (0.8), and offensive rating (113). If there was any doubt, George has reasserted himself as one of the most premiere two way players in the entire NBA who is right in the middle of his prime. He’s shown to be at his best when he’s the “second banana” to Westbrook, his efficiency is so much better and his production is so much more consistent which tells you that this style of play fits him. When he was in Indiana everyone knew he was going to get the ball and take every shot and that every play was going to be run for him. But now with this new freedom in OKC, where he’s allowed to let the game come to him and if he shoots it great and if not that’s fine too, it’s opened things up so much more. Considering the Thunder are 17-9 and legit fighting for the top spot in the West, I would argue it’s working out pretty well.

It’s just not everyday you see a star player make a conscious effort to make things not all about him. It really seems like George has bought into OKC given he could have returned home and instead chose to stay, and I think it’s because this environment is bringing out the best in him as a basketball player. When he’s at this level he’s what, a top 10 player? Top 15? In a league where star players are more often than not about themselves than about what’s the best for the team, that’s pretty refreshing to hear from George that he really doesn’t give a shit. I mean his usage rate of 28.4% is the lowest since his 2013-14 season, and it seems like he couldn’t be happier.

A star player who doesn’t care about being the man, what a concept.