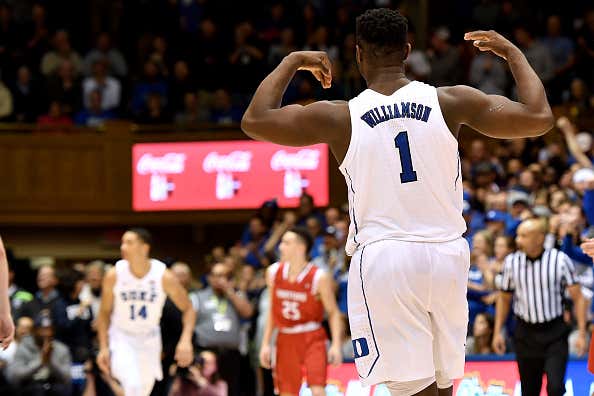 [CBS Sports] – “He’s a once-in-a-generation athlete, I’ve never seen somebody like that before,” said Durant. “He moves good,” said Durant. “Zion, he’s protecting the rim in the half court, that’s how athletic he is. He’ll be a great team defender.”

So, yeah, this is obviously in relation to his athleticism, but it’s something that doesn’t get talked about enough. Durant was on a podcast talking about Zion and how he’s a generational athlete, which is absolutely true.

However, when you think of Zion Williamson you tend to think of his dunking and ability to finish at the rim. If it’s not that it’s how he has incredible size and can handle the ball and is actually a damn good passer. However, it’s what Durant says that continues to be something that doesn’t get talked about enough.

He’s a good defender by every measure. He gets criticized by some that he just hunts blocked shots at the rim. But, there are stats that say otherwise. He grades out as ‘very good’ defensively according to Synergy, giving up just .72 points per possession.

If you want to get even deeper and look at the team defender, we can do that. One of the things he’s excellent at that I don’t think has been talked about yet. Rotations. He is quick enough with a high enough basketball IQ that he knows how to help and then find the shooter. That’s why teams are shooting just 34% against him in spot up sets this year.

I back to this play against Kentucky:

Zion plays this perfectly. He takes a step in to help in case Bolden gets beat off the high ball screen. When he sees Bolden holding ground he rotates back to the corner. This is what Durant is talking about. Yes, you can say Zion gambles a bit too much right now, but he’s playing against inferior competition. He tends to gamble against the likes of Stetson and Yale. However, this is what will translate to the next level and part of the reason as to why he’s the projected top prospect for the 2019 NBA Draft.