Today we welcome Ellen Denegeres to ever expanding club of talk show hosts who deem it necessary to talk Gisele into talking Tom Brady into an early retirement. Noted sexual predator Charlie Rose badgered her into saying her husband had a concussion that was never reported.  Robin Roberts shot her shot on Good Morning, America back in October. Now Ellen. Can’t a woman just appear on a talk show to promote her book braless: 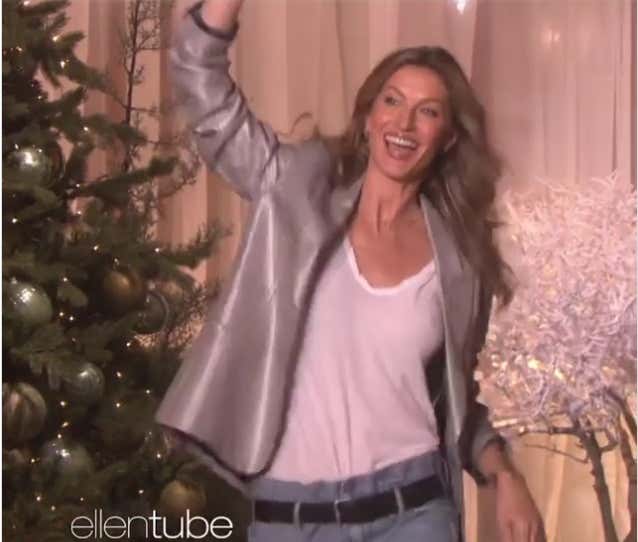 … without someone bothering her to rearrange her husband’s life? Not to mention mine?

Fortunately, if we can take anything away from this, it’s that Tom has clearly put his foot down. Made it clear that he’s the boss in the relationship and she’s going to have to get in line and follow his lead because what he says goes. Her answer to the inevitable retirement question was perfect. “I think you should talk with him about that,” Bündchen, 38, replied. I haven’t been very successful,” she said. “I want him to do whatever makes him happy.” Boom. end of discussion.

She couldn’t have been coached better if Dante Scarnecchia told her what to say. No more suggestions about violating the league’s concussion protocols. No more talk about worrying about him and retirement. He’s going to do what he wants to do. On his terms. They are all about traditional gender roles. He’s the Chief, she’s the Indian. King of the Castle. Lord of the Manor. Master of all he surveys.

Hopefully, this will be the end of it. What I don’t know about hosting a talk show could fill a library. But I’ve interview celebrities – including ones promoting a book – enough to know that if you’ve got one of the world’s most famous, successful and interesting figures sitting in front of you having just finished writing her life story, there is plenty enough ground to cover without trying to derail the end of her husband’s career, cost his fans Super Bowls and jump start the Brian Hoyer era. So knock it off, assholes. Worry about your own quarterbacks and we’ll take care of ours.