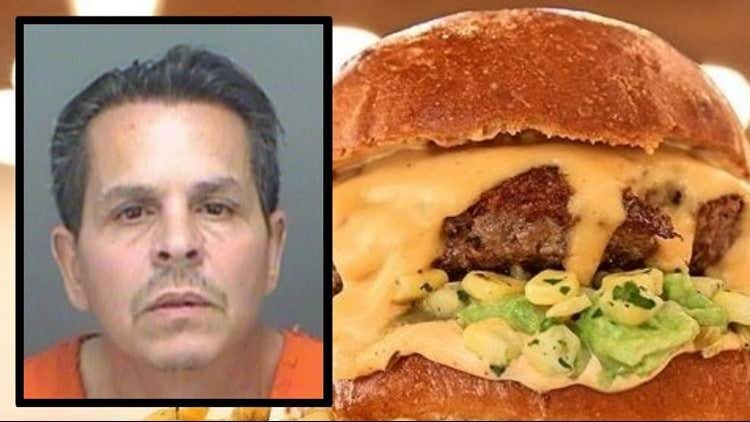 Source - Local police are cracking down on one of the world’s oldest crimes, even if the attempted transactions are…unconventional.

A Pinellas Park man is accused of offering to have oral sex with an undercover St. Petersburg police officer in exchange for a hamburger.

According to an arrest affidavit, Frank Caponi, 57, propositioned a female officer he thought was a prostitute.

Authorities arrested him on a prostitution charge.

It’s unclear what type of burger was allegedly offered.

To you, Frank Caponi might be a pervert. A skeevy loner perhaps. A derelict ruining the quality of life in the seedier sections of St. Petersburg. Or maybe even a sketchy moron who can’t tell the difference between a desperate, troubled girl on the run from a broken home trying to feed her drug addictions by having sex for money in alley ways and a graduate of a police academy. (Here’s a tip from Life Coach Thornton: Pretty Woman lied to you. If you see teeth, think “cop.” You’re welcome.) But to me, Frank is something else entirely.

He’s a throwback. A man from an earlier age, stuck in our modern times. What some people like to call “an Old Soul.”

Men like him have been paying for sex since we came down out of the trees and began to walk erect. It’s just that for millennia, you didn’t have to pay with cash. Not for an alleyway blowjibber, not for anything. Commerce was conducted by bartering. Through trade. Which is why some country stores are still called “trading posts.” It’s a callback to a simpler time, when you could haggle with a shopkeep. “I’ll give you six beaver pelts and this stuffed owl for two bags of sorghum and a box of shotgun shells,” and so on.

That’s all that was going on here. He was merely negotiating a swap of goods and services. The good being his delicious hamburger, the service being getting his dick sucked. Quid pro quo. Except the woman in question was not actually a pro. His only crime is being a man from a different time, trying to function in a world of card readers that plug into your phone, electronic cash transfers, Concur and Venmo. Well I mean, that and the whole soliciting prostitution thing.

And in answer to the question of what kind of burger he offered, I would have to think it was a pretty deluxe one, right? I’m proud to say I don’t know what the going rate is for a hummer, but I’m guessing it would be way more expensive than just some speedburger. So it would have to be a good half-pounder Angus beef one with all the toppings, otherwise you’re just insulting the hooker. Keep that in mind if you ever try use one as BJ currency, whether you’re in Florida or some civilized place.