If you buy this, you’re a sucker of the highest regard. Last time I saw something this fake there was this picture of a full grown lion in a child’s park. 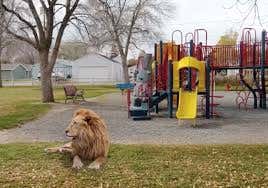 The story went that a lion escaped from a zoo and was chilling his mane’d dick off by the monkey bars. The lion walked up to the monkey bar and the gibbon bartender said, “What’ll be?”

With a long puff of a cigarette and a firm exhale, the lion said, “Oh. I dunno? Deer.”

The gibbon said that was sexual harassment and that she had a name which was clearly printed on her nametag. The lion quickly corrected the record saying that he meant that he would like to eat a deer and wasn’t calling her dear. “Homophones can be tricky,” he said with a roaring laugh.

The situation de-escalated and they begin to chat about a tweet from Kentucky Fried Chicken. They settled the night by agreeing that having the smell of fried chicken in your house for hours without actually eating fried chicken might be the worst idea that you could have in during the Holidays. Well, that and crawling through an abandoned Chinese food frier vent. No one would do that though. It’s too outrageous even for an escaped lion and a bartending gibbon.