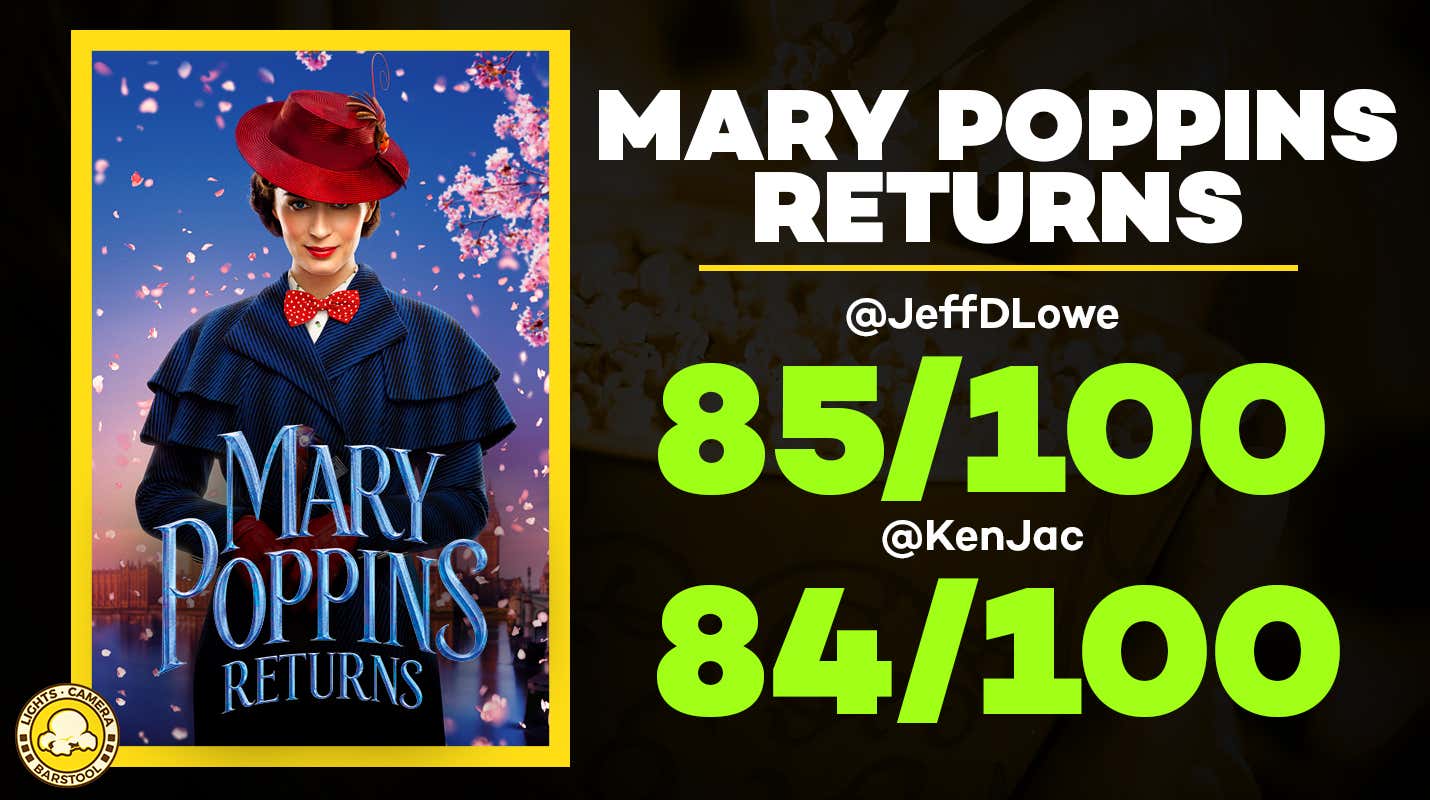 Mary Poppins is back. Is it necessary? Does it work? Is Emily Blunt still amazing (yes)? Let’s find out…

Jeff (85/100): Carried by Emily Blunt’s award-worthy performance, ‘Mary Poppins Returns’ might stick to the same formula as the original, but there’s no doubt it’s a wonderfully made musical. It hits a lot of the same beats as the original, and is entirely too long, but offers enough freshness and new songs to make it just as charming.

Replacing a legendary actress like Julie Andrews in a legendary role like Mary Poppins is as big of a task as it gets in the acting world. It’s not that I doubted Emily Blunt but expecting greatness in filling those shoes would have been foolish! Well, Blunt proved my concerns wrong because she is fantastic in the role. She brings the wit and sharpness of Andrews’ Poppins, all while infusing the character with her own bit of flair and attitude. It will be a real shame if she isn’t nominated for Best Actress at the Oscars. The other performances were all good, especially one major cameo, but the only one that really sticks out otherwise was from Lin-Manuel Miranda. His singing and dancing was top notch, but he did leave a little to be desired with his British accent, which felt a touch off the mark.

Time will tell with how memorable and catchy the songs will be and I am not sure any can touch the music from ‘A Star Is Born’ for an Oscar win. With that said, I was pleasantly surprised to see them not go with a “nostalgia route” and just hit all of the original movie’s songs. They reference some of the original songs such as “Spoonful of Sugar,” but do so with small touches inside of the new tracks. So many soft-reboot or hard-reboot movies rely on “remember this!?” references, so ‘Mary Poppins Returns’ was a pleasant surprise. In terms of what you see on the screen, the colors, especially in the “dream-like” sequences, explode off the screen and capture the same visual wonderment of the first movie.

The difference between this movie being in the 80’s and 90’s lies completely in the “pacing” and “length” categories. While nothing was bad in the movie, there was a chunk of the story that felt unnecessary. Not to single out Meryl Streep or anything, but the entire portion of the movie with her character sort of stopped the movie dead for me. It just seemed to drag a bit when she showed up. The song she was a part of was fun and had great set pieces and choreography, but it felt out of place. Not to mention that they don’t even wrap up the storyline of her character by the end of the movie. All of the elements work, but, for me, there were just too many of them in ‘Mary Poppins Returns’.

I highly doubt many people will dislike this movie and it’s the perfect holiday family film to go see in theaters. Emily Blunt is worth the price of admission alone and, despite a few flaws, Mary Poppins’ return to the big screen won’t disappoint.

KenJac (84/100): A sort of cookie-cutter musical film, ‘Mary Poppins Returns’ features some incredible visuals and songs complimented by one of the best performances of the year from Emily Blunt. It was a little long and the plot was thin, but it certainly succeeded in what it set out to in being an over-the-top, entertaining extravaganza.

I can’t emphasize enough how outstanding Emily Blunt was as Mary Poppins. She was effortlessly quick and captured the essence of a really timeless performance by Julie Andrews perfectly. No other individual performance really moved the needle for me too much. Lin-Manuel Miranda’s cockney accent was… something. The kids and Ben Whishaw/Emily Mortimer weren’t really impactful, and Colin Firth was just sort of there. Maybe the biggest swing and miss was casting Meryl Streep into the role of Topsy, which threw off the pacing of the movie.

No two ways around it, this is a long movie. What makes that criticism more annoying is that there is parts that clearly could have been cut down. Namely, the Meryl Streep role. Her appearance and character served nothing to the plot and didn’t prove to be particularly interesting. It took like 15 minutes to get out of her sequence and nothing she did or said impacted the film at all. It almost felt like she told director Rob Marshall that she wanted a role so he HAD to write her in. Other than that, it was a wonderful movie. The songs were great and the accompanying visuals were really incredible, making use of CGI while paying tribute to old-school animation. The set pieces and dance choreography were also so well done, easily the best of the last few years.

It’s one of the better movies from the musical genre and will hopefully blow away last years ‘The Greatest Showman’ in the box office. Fans of the genre, families, and anyone with a date should definitely put this film at the top of their list this for this month.

—
This movie is not yet Officially Not Buttered since it is not out yet, but it looks like it will have no issue achieving that feat. We will review the movie in a few weeks on Lights, Camera, Barstool and reveal Trillballins’ score. Remember to rate all 2018 movies below.