Die hard college hoops fans don’t need an explanation for why that headline is laugh out loud funny.  But for the more casual fans who haven’t transitioned their interest over to CBB yet, here’s a quick peek at the AP Top 25, as recorded by ESPN: 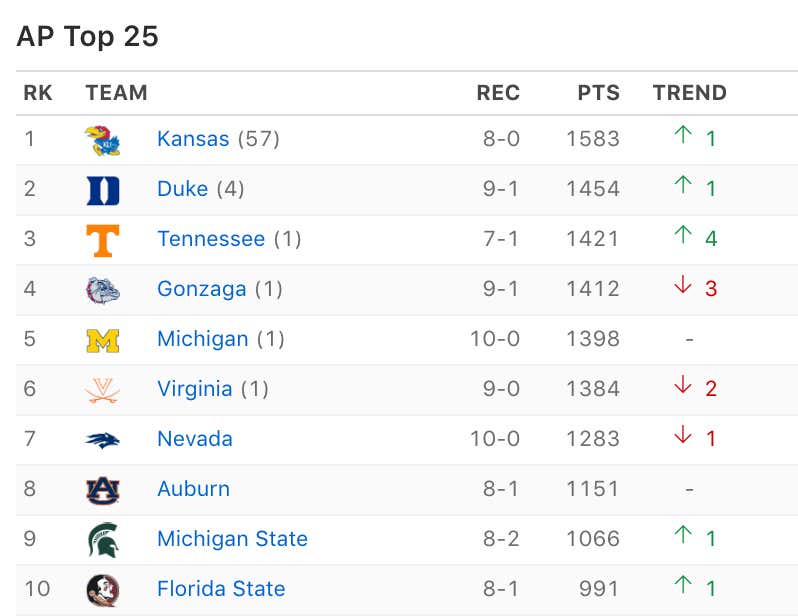 As you can see, the top 3 is Kansas, Duke and Tennessee.  3 big time programs having 3 big time seasons.

Now if you take a look at Graham Couch’s rankings – a writer for the Lansing State Journal and one of 65 AP voters – you’ll notice something curious: 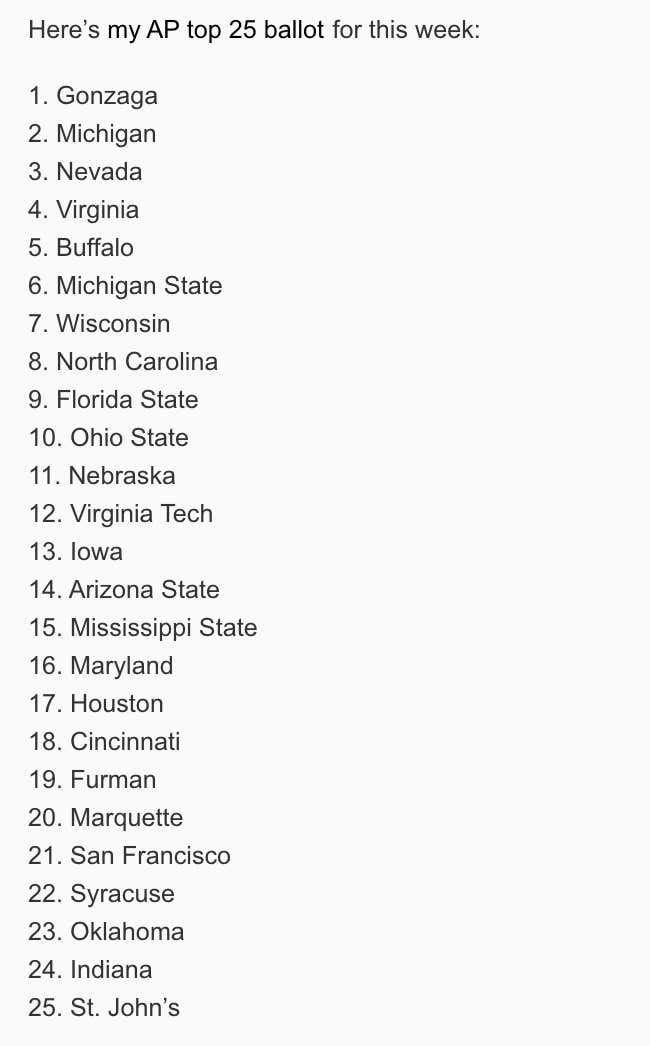 Maybe it was just an oversight?  Maybe those teams are so CLEARLY the best 3 that he felt he didn’t even need to include them because it was just a given?

To avoid playing on another team’s campus altogether is a sin of cowardice and ego that eventually can’t be ignored — like when we’re more than a month into the college basketball season. So this week I removed Duke, Kansas, Tennessee, Auburn, Texas Tech, Kentucky, Villanova and Texas from my Associated Press top 25 ballot. That’s No. 1 Kansas, No. 2 Duke and No. 3 Tennessee, as other voters deemed them this week, so clearly I had an impact. I didn’t even put them through the paces of an evaluation. Because, while in some cases they have impressive neutral-site wins, they aren’t playing the same game as the rest of college basketball. They haven’t yet been tested in a true road game.

You see…Graham is nothing if not a man of principle.

In college basketball, so much is revealed about the character of a team on the road. So many road losses are better showings than celebrated home wins.

In no other sport is the home court worth so much to momentum, to confidence. In no other sport does a road team, so smooth and high a few nights earlier in its own building, so often look like a befuddled, haphazard mess. The contrast between home and road in college hoops is so severe, to not play on the road is to take advantage of a system that creates the appearance of a larger chasm than really exists between the haves and have-nots.

…It’s a standard of fairness I’ve chosen to set. I did so last year, too, removing a couple of these same teams. As soon as they play a true road game, they’ll be back on my ballot. No penalty. No need to climb over other teams. It should never be that way. Every week should be a fresh analysis of everyone. Tennessee, after it plays at Memphis on Saturday, might be my No. 1 next week. When Kansas rejoins the rest of society in two weeks, the Jayhawks could be deserving of No. 1. They might be now. But you don’t really know that when they’re busy dodging true road games. So, for this week, they’re out.

Mr. Couch isn’t your standard AP voter.  He doesn’t look at “records” and “stats.”  He does not cast a vote until he waxes poetic about fairness, equality, sins of cowardice and ego – the human condition as a whole.  Satisfy his standards of honor or find yourself dinged a vote.  Period.

Now I know what you’re going to say.

But… Duke played their first game of the season against (then) #4 Kentucky, and blew them the fuck out on a neutral court in Indianapolis.

But… Kansas beat (then) #10 MSU in their first game, also on that same neutral court in Indy.

Kansas has beat #3 Tennessee, and Duke went straight to the loaded Maui Invitational – which, for those who are bad at geography, is NOT in North Carolina – and suffered their only loss of the season: a 2 point loss to (then) #3 (now) #4 Gonzaga.

Oh, and speaking of Gonzaga, remember when they were #1?  Know why they dropped to #4?  Because Tennessee beat them.  In Phoenix.

I see what Couch is doing.  I get his reasoning.  I get the point he’s trying to make.  But this ain’t it chief.

He’s got San Fran in there – yes, they’ve had 2 road wins…against fucking Cal and UC Davis.

He’s got Marquette in there – yes they’ve played on the road…once, and lost.

Shout out to Oklahoma making an appearance because of their opening road games against *checks if these teams are real* UT-Rio Grand Valley and UT-San Antonio (a school best known for producing a blogger who writes about fucking pumpkins – no, not fucking PUMPKINS, FUCKING pumpkins, like having sex with them – professionally).

Yet in college basketball, folks congratulate coaches on wins that mean nothing. Duke coach Mike Krzyzewski is deservedly a legend. But if you gave my mother Zion Williamson, R.J. Barrett, the Cameron Crazies and an undeniable home whistle, she might go unbeaten, too.

I feel like if you have this lack of understanding of the sport you don’t really deserve that AP vote in the first place, but who am I to say.

(via The Lansing State Journal, TBL)