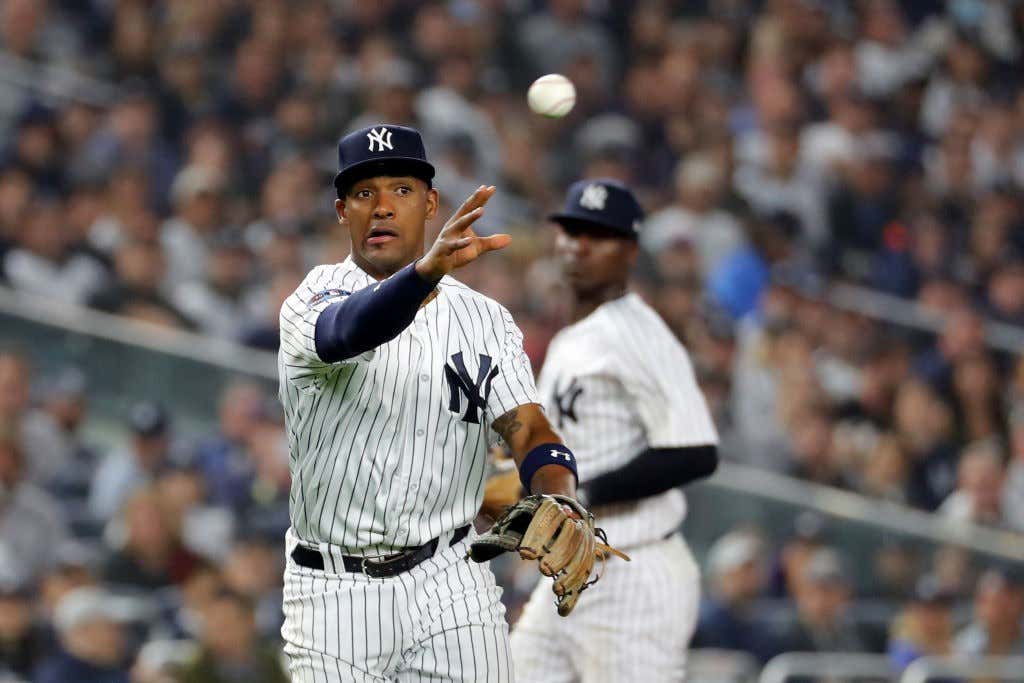 If the Yankees were going to make a big move this offseason it was most certainly going to hurt. They already have had to deal top pitching prospect Justus Sheffield to get James Paxton. But there’s still one more trade out there Cashman has to make and the whole Noah Syndergaard/J.T. Realmuto rumors have forced another name into the light: Miguel Andujar.

Andujar became a huge fan favorite this past year and was probably the team’s offensive MVP based on consistency, health, and productivity. He tied the MLB record for doubles by a rookie, and broke DiMaggio’s Yankee rookie record for two-baggers. His swing is vicious and he seemingly adjusted to everything big league pitchers tossed at him. He should have won the AL Rookie of the Year if not for Jon Heyman, but we’re past that. The one downside of Andujar’s is that he cannot field to save his life. It got so bad that the Yankees benched him in Game 4 of the ALDS against the Red Sox. It’s alarmingly bad and never improved. He backs up on balls he shouldn’t, his footwork is terrible, and his arm is not accurate. A-Rod tried to work with him, but nothing changed.

We were warned about this to start the season, and the reason Brandon Drury initially won the 3rd base job was because of that. When Drury went down with his injury immediately, Andujar took over and never looked back. His defense was hidden because of his explosive bat. For as long as we could, we tried to ignore it and trick ourselves that it would get better. It didn’t, and eventually the defense cost the team huge runs.

So now we’re here. The Yankees need to move another big piece to get what they want and Andujar’s name is being brought up constantly. The Yankees are listening, and I think it’s something they need to do. It’s going to hurt, but it needs to happen, especially if it brings us Noah Syndergaard. The big elephant in the room is Manny Machado. He’s lurking, and trading Miggy will open up a spot for him in this lineup. Manny can live out his lifelong dream of being the Yankees shortstop for five months and when Didi is ready to come back, Manny will slide over to third. It makes a lot of sense.

Cashman obviously loves Andujar’s bat, but his defense makes him expendable 100%. Whether it gets us Kluber, Syndergaard, or whoever I’m content with dealing him and I’ve said that for a while. I said this back during the trade deadline when Manny was being rumored to be on the move. The super star replacement is out there, Cashman just has to pull the trigger. This will suck to see him go elsewhere, but it’s the only way to make this work.