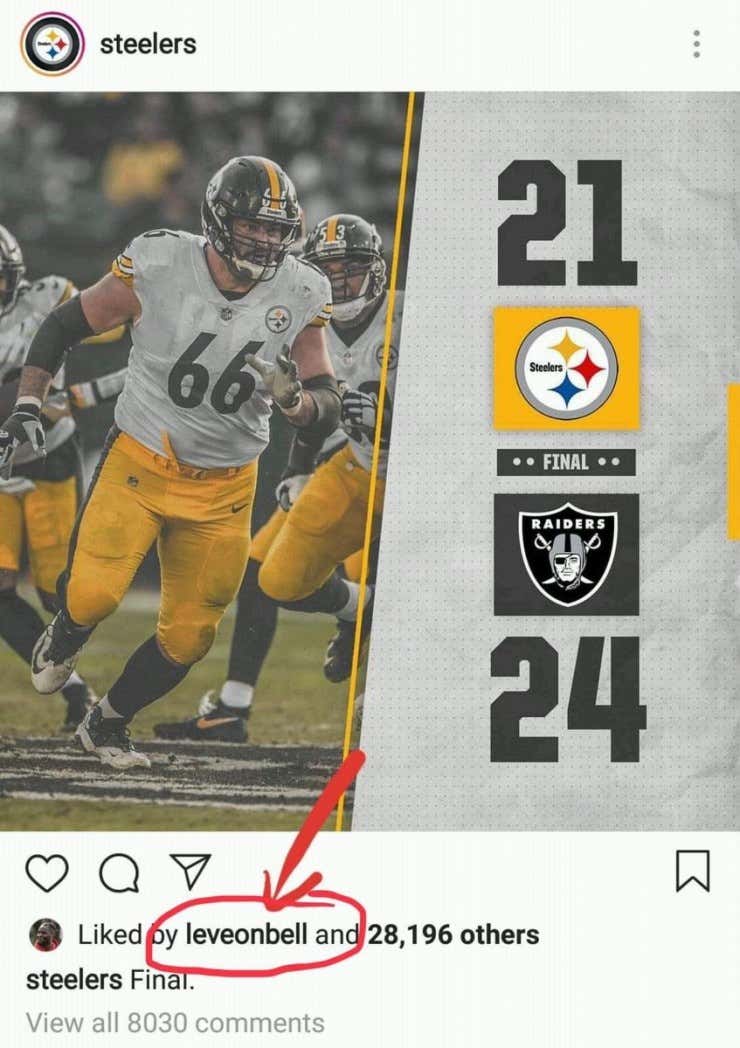 Oh, now that is a tough look for the Steelers. Something they can not be in any mood for right about now. It’s got to be like going on Facebook to say you just got laid off and have you’re ex reply with this:

And to think, it wasn’t that long ago that they had Upper Hand with Le’Veon Bell. The whole middle third of the season they were on an unstoppable roll. Just over a month ago they crushed Carolina 52-21. James Conner was the living embodiment of “Le’Veon Who???” sentiment, with five 100-yard rushing games and five 50-yard receiving games in his first eight. It looked to all the world that Bell had overplayed his hand. But since then Connor’s totals have been 65, 25, 53, 60 on the ground and 8, 24, 42, 14 through the air. The Steelers have lost three straight. Including one at Denver where they outgained the Broncos 527-308 and this debacle against the 3-10 Raiders. And now Bell has hand.

To make matters worse, Bell is piling on at a time when the Steelers need a win against a Patriots team that is coming off one of the great, cosmic, titty-twister losses in their history and knows they need to win out to get a bye week in the playoffs.

And speaking of history, here’s the Steelers’ history against New England in the Mike Tomlin era:

So if ever there was a good time to have your formerly beloved, one-time franchise running back-turned-jilted, resentful ex-spouse waving his dick at you (and I don’t know why there ever would be) this is definitely not it. But there it is. Bell just sitting at home unemployed, waiting for his massive pay day to come, and enjoying his former teammates’ misfortunes. It would take a heart of stone not to laugh.