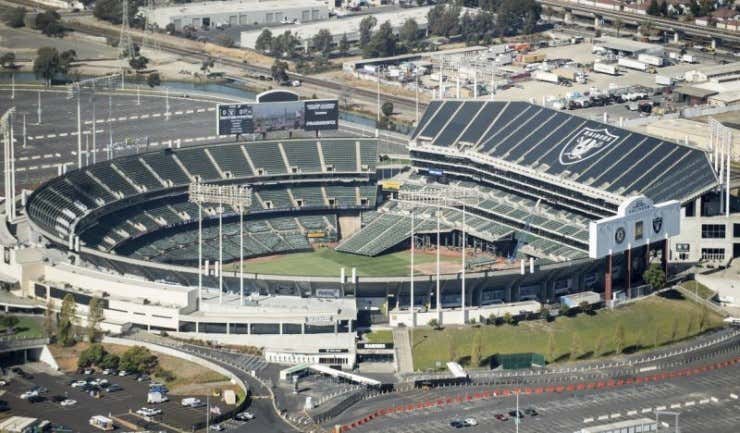 Source - Conditions in the Oakland–Alameda County Coliseum somehow reached a new low during Sunday’s game between the Oakland Raiders and Pittsburgh Steelers:

The Coliseum has been known for its mediocre-at-best conditions on and off the field. In 2013, a drainage problem caused raw sewage to flow into the home, visitor and umpire clubhouses. Even before that, unsanitary conditions led to concern about E. coli in the visitor’s training room.

These are sad, pathetic days in Oakland, indeed. Back in the glory days of the Raiders, this would never have happened. A report complaining about dead rodents in the vending machines would’ve been laughed out of the press box and probably had their credentials revoked.

Not to be an old geezer ranting about the old days, but the Raiders of my youth would’ve welcomed dead vermin in the soda machine. Certifiably insane Raiders like George Atkinson (who once smashed Russ Francis’ nose across his face with a forearm shiver in a playoff game and afterwards said “Fuck Russ Francis!”) probably ate mice alive like a wolf. Ted Hendricks was a football badass seemed like the kind of guy who commanded an unholy army of rats. I bet Al Davis drank mice’s blood to keep himself young. Having dead mice in the media soda machine is the sort of thing men like Ken Stabler and Mike Haynes would’ve considered part of the Raiders mystique. Of the whole “Commitment to Excellence” thing. Like drunken fat guys wearing Halloween costumes in the end zone seats.

Now, it’s practically a scandal. A health code violation, at the very least. At least it won’t be a problem for the Raiders or the Oakland press corps when they move to their $2 billion monument to the power of gambling revenue in Vegas. Then the rotting corpses of rodents next to the Dr. Pepper dispenser will just be another lost part of their once glorious past. Sad.