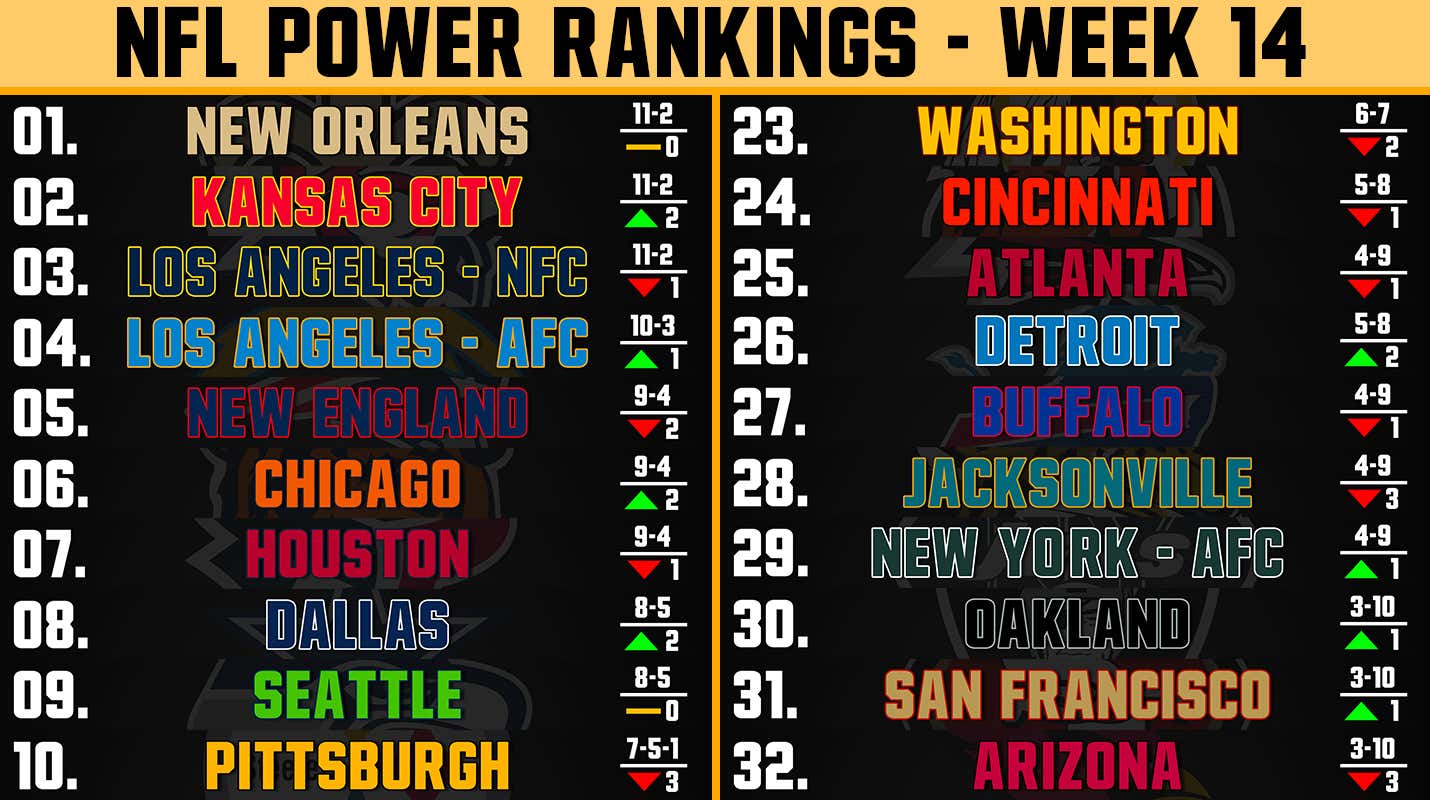 Most of the top teams sucked this weekend. That was weird. It made my job harder.

Please remember to get super mad online and angry over these meaningful rankings!

The shuffling of these bottom three teams continues!

George Kittle might be the greatest tight end in the history of the NFL at this point.

Something about the Black Hole has been rough for the AFC North this year, with two of the Raiders’ three wins coming against the Browns and Steelers.

I know they won, but they also got whacked by the Bills a few weeks ago, so I really can’t give them too much of a boost.

Josh Allen was pretty bad passing the football, but he has become an elite running quarterback. So that’s something!

A win over Arizona isn’t that impressive, but they move up by default with losses from the Bills and Jaguars.

The season is officially lost.

They hung with the Chargers for a while, but now the focus will turn to whether or not they make Hue Jackson head coach at the end of the season.

Thoughts and prayers out to Alex Smith.

The Buccaneers’ defense has quietly been solid as hell since they made a change at defensive coordinator, unfortunately, their offense leaves a ton to be desired.

Whether or not you think Saquon Barkley was the right pick, it’s clear he is already one of the best players in the NFL.

They won… but I had to drop them down a slot. This team is no good.

The hopes are slim, but the Browns are still alive in the AFC North and Wild Card races after throws like this from Baker Mayfield…

The playoffs are still not out of the question for the Broncos with a massive Saturday night game against the Browns at home this week.

Things have really fallen apart for the Panthers and much of it can be blamed on the injury that is clearly holding back Cam Newton.

This team doesn’t quite have the magic of last year’s team and the injury bug has destroyed them, but somehow, they’re still very much alive in the playoff hunt.

The stocks of Kirk Cousins and hot head coaching candidate John DeFilippo have taken a hit this season. Even with a dumpy NFC, the Vikings are far from feeling comfortable about making the playoffs.

This team is so streaky that it is hard to trust them, but they do have a manageable remaining schedule with games against the Giants, Redskins, and Colts.

A miracle win is still a win. This team desperately needed that outcome against the Patriots.

That brutal loss last week to the Jaguars (along with many other missed opportunities early in the season) is without question going to burn this team at the end of the season.

They’re in the driver’s seat for the playoffs, but the Ravens’ season could have had a major upswing if they had finished that game off in Kansas City.

Quietly, out of nowhere, the Ravens and Browns are breathing down the necks of the Steelers. A lot still has to go wrong for them to relinquish the division, but games against the Patriots and Saints is going to make it tough.

Uh, it’s a win, but holy shit that Monday Night game was ugly.

Amari Cooper’s career has been taken to another level in Dallas and the only thing I can see holding this team back from competing would be a stinker game from Dak Prescott.

Even with the win streak coming to the end, the Texans are still in the hunt for a bye in the AFC playoffs.

The win against the Rams was impressive as hell, cementing their defense as the best in the NFL. Seemingly locked into the 3rd seed in the NFC, the Bears are going to have to go on the road at least once in the playoffs.

I know it took a miracle for them to lose in Miami, but I just truly think, at this point in the season, they’re the third best team in the AFC.

The Chargers need to beat the Chiefs this Thursday and then hope they lose to Oakland in Week 17. The latter is unlikely, meaning there is a decent chance the Chargers end up as a 13-3 wild card team.

You’d have to think it is unlikely that Los Angeles has to play a road game in the cold in the playoffs, so I am going to only drop them down a slot after their loss to the Bears. Tough environment, tough weather, I still think the Rams are a Top 3 team.

It took overtime against a mediocre Baltimore team, but Kansas City stays in the driver’s seat in the AFC (even a loss to the Chargers this Thursday leaves them in good shape). It’s clear that no Kareem Hunt is going to be a problem for the Chiefs.

The whole Top 5 is a mess and I thought about dropping New Orleans, but they looked more like themselves in the second half in Tampa, so I’ll keep my trust in them.