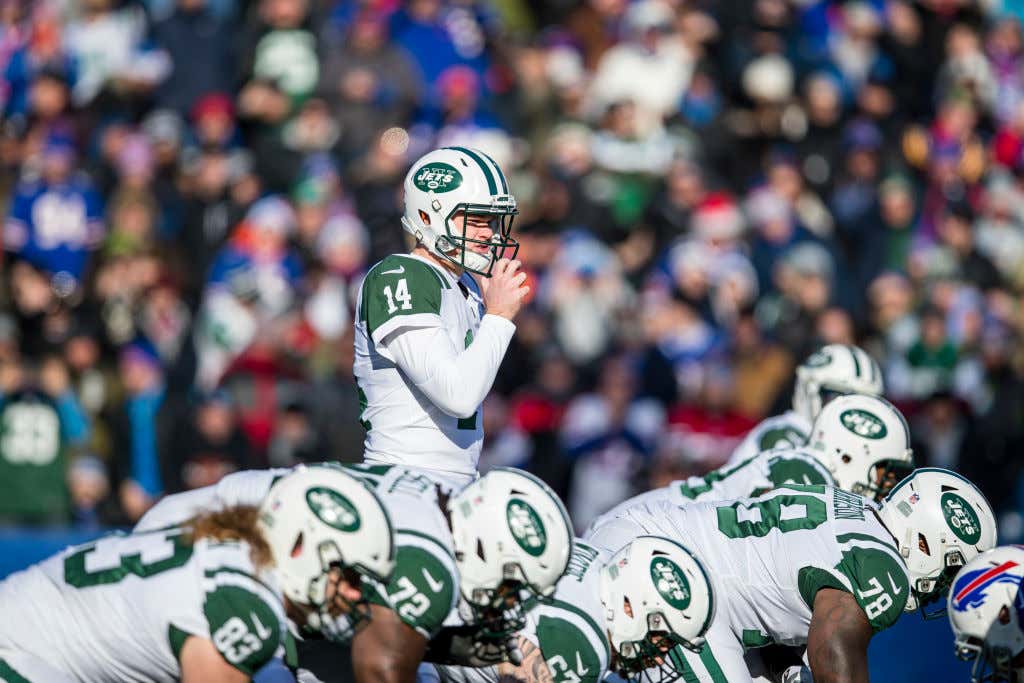 I can’t believe no one’s used this GIF yet to talk about what Sam Darnold did on Sunday! The only difference here is that I bet The Undertaker’s feet were both healthy. Sam Darnold, on the other hand, his foot has really been bothering him. He missed 3 weeks! It’s really just heroic if you think about it.

The thing about this game that made it so great was that we actually got to have fun watching the Jets again. It’s really quite simple. Watching this game was fun. Watching Sam Darnold get in a groove and put together a handful of fucking dimes to march the offense into the endzone in the 4th quarter was incredibly fun. Watching Andre Roberts continue to prove he belongs in the Pro Bowl with a couple massive returns was also a good amount of fun. Trumaine Johnson had 2 interceptions; fun. I could go on and on. Add all the fun together and what you get is me sitting here trying to write this while waiting on hold with a Viagra customer service rep because I’ve been hard since 3:23 pm on Sunday afternoon and I’m starting to get dizzy.

I made some GIFs for us to look at. Let’s get into it.

Sam Darnold Is Back And So Is My Blind Optimism

Shut up about his stupid interception. You’re a stupid interception. Did you watch the whole game? People make mistakes, and Sam Darnold is a people so we need to just accept that it’s gonna happen and move on. He did so many good things vs. Buffalo on Sunday. If you can’t enjoy that because you’re pissed we dropped to the 5th pick in the draft by winning, I wish I could offer you a delicious cookie or share a funny joke to try and cheer you up, because you obviously have forgotten what happiness feels like.

I get where you’re coming from, but also in the end the Jets will either fuck it up, or they won’t; the idea that picking #3 or #5 or #1 makes such a huge difference it’s worth complaining about watching Sam Darnold orchestrate his first GW 2-minute drill in the 4th quarter makes me want to yell at my dog for no reason. She doesn’t deserve that and neither do you.

Look at this play. C’mon now.

That’s the signature play of his young career right there. That’s why we drafted him where we did. That’s just raw athleticism and creativity and play making ability. His foot probably hurt too. You just love to fucking see it. I know it wasn’t part of the 2-minute drill, but it tied the game in the 4th quarter so it’s still incredible and I won’t ever stop thinking about it.

I don’t know if you can read, but that’s on 3rd and 10. That’s a gorgeous throw to the sideline in a big moment. Those are just facts.

Back to the 2-minute drill, it’s just so nice to see how easily Sam Darnold can work both sidelines when he’s comfortable.

This next one just makes the cut because I love Eli McGuire. I think he can be a really solid 2nd RB for us for a long time.

All in all, just a great day watching Darnold re-injure his foot then come back in and lead us to victory. I was really proud of him in the locker room, and I’m even more excited to see what he can do the rest of the season.

He had the pick-6 last week and I remember thinking, “well good, it’s a start,” though I was far from satisfied. Howevah, 2 interceptions on Sunday helps his cause significantly. I won’t lie. He undoubtedly added to my happiness. Maybe he’s locked in again. Maybe he’s not. Only time will tell.

He’s been doing this all season so I wasn’t surprised, but his ability to give Sam Darnold good field position all day Sunday (except that one time he fumbled) was so crucial to the offense turning things around.

It’s been so long since the Jets had this dynamic of a return man. I know he’s been in the league for a while so it’s very likely that he doesn’t keep this up over a 2 or 3 year span and we should just enjoy while it lasts, though you can’t tell me it wouldn’t be great if he played like this again next season, after we’ve landed another top-10 draft pick and spent $100 million in cap space on guys who can score touchdowns and sack the quarterback. Yeah, I went there.

Here’s the thing about the Jets season the rest of the way. We’re at a turning point. I get the people who want to tank, I really do. Darnold’s development is just so much more important. If he can continue to show growth the rest of the year, we’ve still got enough healthy weapons around him to let him shine a little bit. It still weighs heavily on the big guys in front of him, and I’m not confident in them anymore at all, but it can happen. That’s what I want to see from the Jets the rest of the way. Everything else is just fucking gravy.

Stay tuned for more New York Jets content because Sam Darnold is back and so are we. This team might be a little fun again after all.