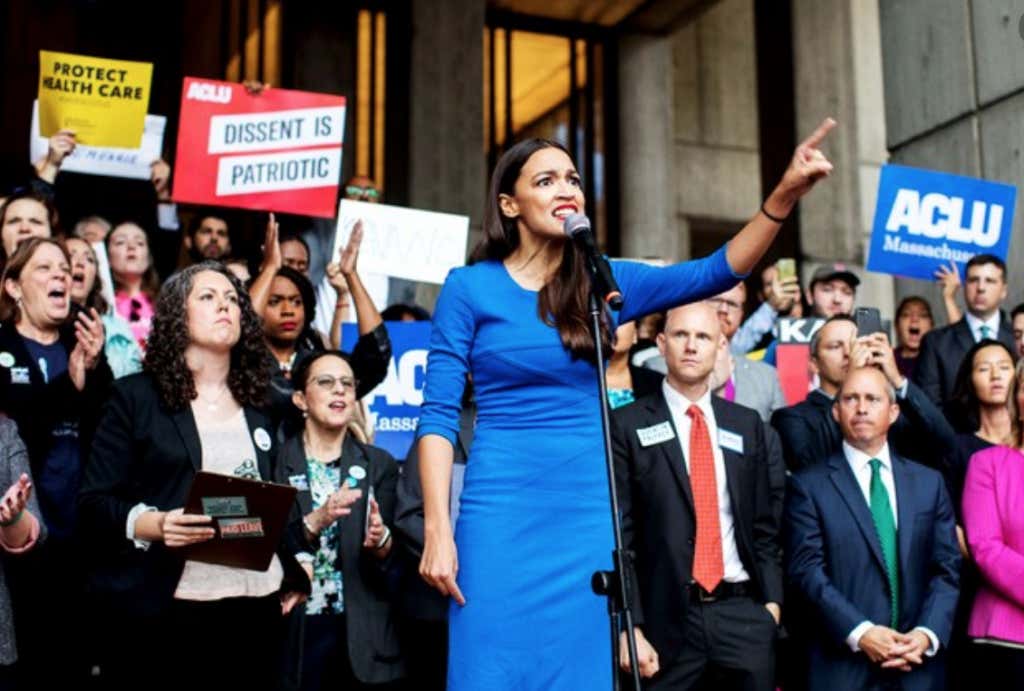 After a brief hiatus hitting the campaign trail this election season, Barstool’s 5th favorite political commentator is back to provide what you all come here for, penetrating political insight. You may remember me from takes like “Why Democrats Should Nominate George W. Bush in 2020” and “Hillary Clinton Should Be Our Next Speaker Of The House.” With everyone going through campaign withdrawals, I’m here to scratch that political itch with a preview of next year’s upcoming legislative session. Hopefully, that will be enough to hold everyone over until John Hickenlooper announces his Presidential bid next week in his quest to become this year’s Lincoln Chaffee. Here’s what you can expect as Congress begins its 116th session in January.

Following her primary upset of Queens Democrat Joe Crowley, AOC has become by far the most talked about Representative-elect this year. She has become a bona-fide social media superstar by political standards, meaning she has about 1/10th the following of racist Twitch streamers and 8-year-old toy reviewers. Instead of hiding behind carefully curated social media accounts, she has taken followers behind the scenes at Congressional freshman orientation, which is a lot like college freshman orientation except instead of using Jell-O shots, creepy older guys try to lure the women back to their rooms to chat about the earned income tax credit. She has also done Instagram live sessions where she confidently misstates statistics about a variety of issues as she makes mediocre looking black bean soup, earning herself the honor of being the most millennial person in politics. Keep a look out this year for what she can accomplish as a freshman legislator this year. If nothing else, she has officially dethroned Mitch McConnell as the hottest member of Congress.

The GOP’s wunderkind went from picking up Tri-Delt freshmen with talks of slashing Social Security in his college years to becoming one of the most influential thought leaders in the Republican Party. Ryan’s Speakership has been a mixed bag in terms of legislative accomplishments. Though he was able to secure massive tax cuts for the vast majority of the Koch family, there are still single mothers who are able to access healthcare benefits through Medicaid, so not all of his goals have been realized. His retirement allowed Kevin McCarthy to fill the leadership void in the Republican Party. McCarthy beat out Ohio Congressman Jim Jordan, who looked to continue the proud legacy of wrestling coaches in Republican politics that has waned in the absence of Dennis Hastert. Ryan has been quiet about the next steps in his career, and our thoughts and prayers are with the Ryan family as they try to get by on only speaking engagement fees and a modest $300,000 a year from the Heritage Foundation.

With Democrats back in power in the House, the Republican’s favorite Congresswoman Nancy Pelosi is on the hunt to reclaim her title as Speaker of the House. Coming off a convincing electoral victory this November, she’s hoping to pull a Sean Payton and turn one good season in the last ten years into lifetime job security despite some pretty glaring missteps along the way. Numerous factions in the Democratic Party have tried to derail Pelosi’s bid for Speaker, but none has been able to put together a formidable coalition or name a viable alternative. With her electric personality and legions of adoring fans, it’s not hard to see how Pelosi has been able to fend off any and all challengers in her bid for the Speaker’s gavel. Calls for her to step aside have come from both the left and right wings of the Democratic Party, but Pelosi has stayed the course and will likely be named Speaker again in January, scoring another decisive victory for radical centrism.

Perhaps no one’s political star has fallen as precipitously in the past few years as the junior Senator from Texas. He has gone from being a hero in the conservative movement, to watching his years of finely honed debating skills be dismantled by the comedic stylings of Donald Trump and barely fending off a challenge to his current seat by a guy who couldn’t even pass an audition to be in the Mars Volta. Trump’s style of Monster Energy Republican politics is ascendant, while Cruz’s version of property rights conservatism is struggling to find its place in the party. Once seen a bomb throwing firebrand, Cruz is no longer to capture the energy of the base of the party as the Alex Jones wing of the GOP finds itself captivating a larger and larger audience. Who knew that positions like making dildos illegal would so quickly fall out fashion.

In just a few short months, Elizabeth Warren and Cory Booker will be battling it out on the Ellen Show to see who’s got the best Nae Nae. But until the 2020 race heats up, the 116th Congress will provide plenty of intrigue and drama for people whose glory years consisted of getting handjobs in the back of the bus en route to high school debate tournaments.