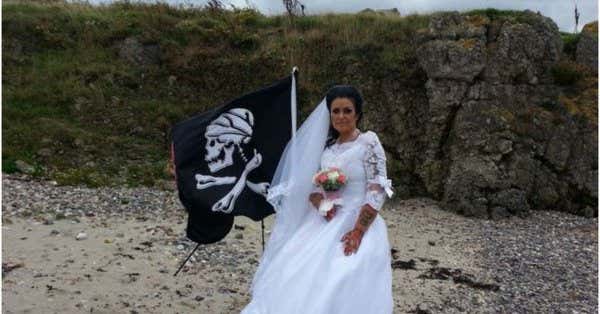 AN IRISH woman who married the ghost of a 300-year-old pirate claims the couple have split up.

The wedding to her ‘soulmate’ took place on board a boat in international waters off the Irish coast.

However the Irish Mirror reports the couple have called it a day after less than a year.

Taking to social media, Amanda said: “So I feel it’s time to let everyone know that my marriage is over.

“I will explain all in due course but for now all I want to say is be VERY careful when dabbling in spirituality, it’s not something to mess with.”

The split is another blow for Jack, after he was purportedly executed for thieving on the high seas in the 1700s.

Pirates of the Caribbean fan Amanda previously told The Irish Post how she spent £4,000 to look like Captain Jack Sparrow, Johnny Depp’s character in the film.

To say that this is heartbreaking doesn’t really get to the heart of how heartbreaking this really is. Marriage is tough. Hell, any relationship is tough. To say that it was the sex that went wrong in this case would be a stretch.

I’ve heard that our ghost pirate pal (GPP) was slinging his dick all over the high seas and her double Ds. Just shooting little ghost ropes over and over. But, sex isnt enough to keep a ghost marriage going. We all know that.

I remember the documentary about longtime stoolie Demi Moore and her ghost romantic interest. They bonded not only over sex but over the love of the arts as well.

You see, where the marriage went wrong for (GPP) and Amanda is their lack of love for the arts. They didn’t even look into the fact that the pottery wheel has been in use since around 4500 BC. In that time the techniques of jiggering and jolleying took over the world: in jiggering, a shaped tool is slowly brought down onto the clay body that has been placed on top of the rotating plaster mold. In jollering, you stimulate the clitoris with the tongue of the ghost. Both are needed for a successful pot and a successful relationship. Without one, divorce. Looks like the GPP needs to work on his jiggering. That’s just one man’s opinion.

Anyway, I’m off to the kiln. I came up with some designs this weekend that really need to be tested by fire. Literally.

When you have the treasure but not the booty <<<<