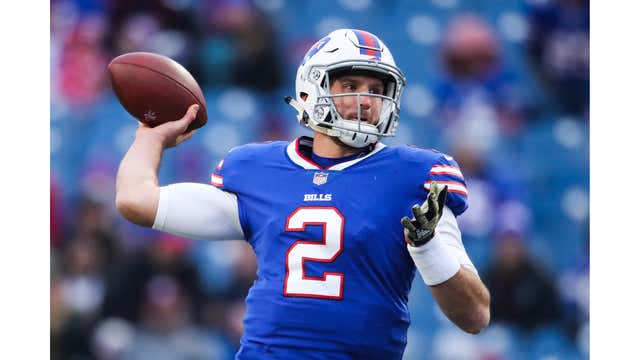 Sunday was one of the best days of NFL football in recent memory, begining with the Dolphins exploiting Bill Belchicks decision to move on from Benjamin Watson and replace him with a TE who dosent know how to take a good angle on a ball-carrier, and culmnating with a reminder in Chicago that the best offense can actualy be a good defense that has to support a bad offense of there own. There were last-minute finishes, Patrick Mahomes doing a no look impression of Jason Williams (the good one), combined with a deadley shotgun offense that was right out of the playbook of Jason Williams (the other one.)

But there’s a dark cloud that has remained descended over the league- the absence of one of its stars and polarizing figures at QB remains in the background, his unemployment simultaneously confusing and frustrating. And the more I sniff around, the more clearly the stench of collusion distiguishes itself in the case of the one missing piece to my NFL Sunday- the disappearance of Nathan Peterman.

Right now the Bills, Jets, Jags, Raiders, Redskins basicaly, Cardinals, and 49ers are all in a horse race for the first overall draft pick and for some reason havent signed Nathan Peterman. Thats a open and shut case if I ever heard one. Here are some facts: We’ve got QBs out here who dont even know to look at the guy that there throwing passes to and Nate Peterman cant even get a job?

So while many are crying fowl about Colin Kapernick and his absence from the league, but the teams that are allready good are good while the teams that are allready bad dont want to win. Any judge thats ever started a message board thread titled “suck for Luck” would throw out the Kap case so fast Cris Collinsworth would cream over the release time. Heck even the Washington Redskins knew when they were 6-4 that Mark Sanchez fit there culture of losing a bunch of games in  November and December more then Kapernick ever could.

In fact you could make the agrument that the proof that he is undoubtedly a good QB is because the R-words didnt sign him. You want to make some money you go out there and invest in all the stocks that Lenny Dykstra is shorting. You want to be well-inform you go out there and read every book the dumbest person you know didn’t write. Germany has legalized every book not written by Hitler and they havent tried to take over the world ever since its not that tough of a conept to understand.

Last week the Denver Broncos brought Peterman in for a workout, and if there’s one guy who really really likes bad QBs its John Elway. Over the last three years the Broncos have started Case Keenum, Paxton Lynch, Brock Osweiler, the Kevin Kline from “Dave” equivlant of some guy who looks like Peyton Manning without the talent, Brock Osweiler again, and Trevor Simien. He would make all the sense in the world for the Broncos since there best unit is their defense and by putting Peterman out there slinging it around you would increase the total number of snaps you get for Von Miller or Bradley Chubb to get a fumble-six. Again, put another notch on the idea that Peterman has to be good if a guy like Elway hates him.

So why the discrimnation against Peterman? Is it because he went to Pitt whose most famous alumni QB is best known for being the second most-likable person to endorse Isotoner gloves behind OJ Simpson, never winning a superbowl and problematicaly getting kidnapped by a transexual detective? All I know is that Nathan Peterman has made the playoffs every year he’s been on a active roster at the start of January.

What is collusion? Wikipedia defines it as a secret or illegal cooperation or conspiracy in order to cheat others. Basicaly it just sounds like a board meeting for Amazon HQ2 or the New England Patriots front office, and the more I learn about it the more I’m convince that there’s some big agreement to not sign Nathan Peterman. The biggest peace of evidence is that Belchick hasnt pulled a sign and stash on Peterman just so that Hue Jackson dosent sign him, start him,  and have him hand the Steelers a potential homefield clinching win over the Bengals in week 17. You want to keep a QB as talented as Peterman out of your opponents opponents hands if you can and Belichick knows this its why he’s signed Tim Tebow, Ryan Mallet, and Ryan Lindley.

In the year of our lord 2018 we have Kevin Hart out here delcining jobs but Nathan Peterman cant even get offered one? I rest my case your honor.

Apparently something happened to Drew Magary from Deadspin over the last several days and while I’m not sure about the seriousness of the situation or how he’s doing, I’m thinking about him and hoping for the best for him and his family. There’s always going to be a lot of noise about the longstanding beef between Deadspin and Barstool but when it came to me and Drew we’ve always tried to put our friendship first. I hope you all can join me in sending good thoughts his way. Honestly not sure what else to say besides the fact that he’s immensely talented and a good person- in a weird way he was an internet role model for a lot of us. Hoping for a full and speedy recovery.