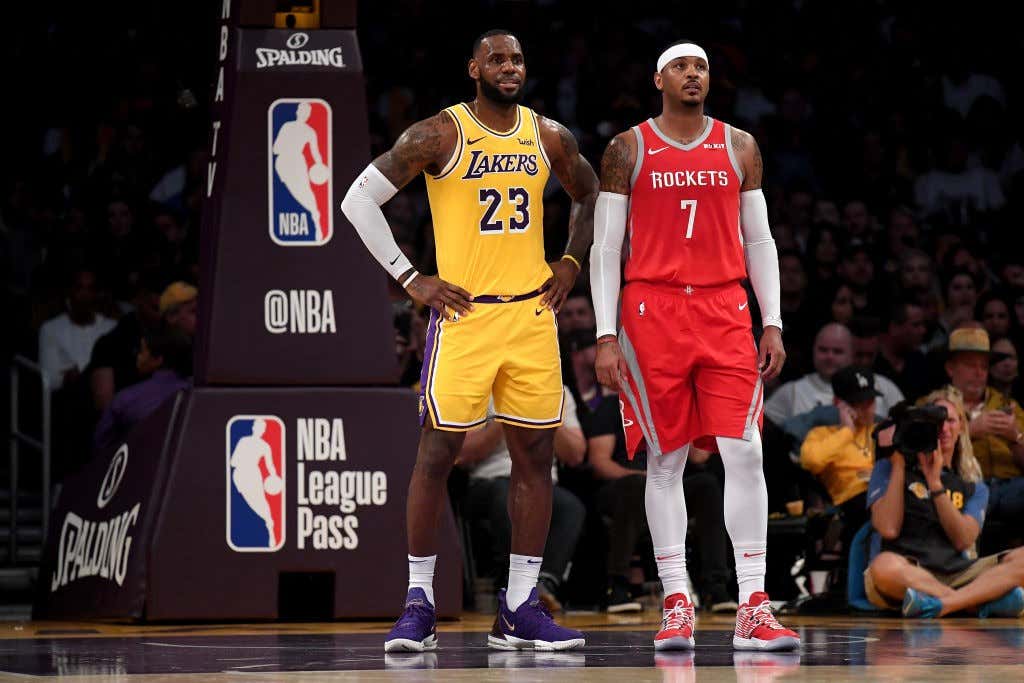 Now according to Joe Vardon’s report,

He can’t be traded until at least Dec. 15, and sources said there had been no request made by James to Lakers president Magic Johnson or general manager Rob Pelinka to make a deal for his friend. Nor would there be.

But James and his camp still believe Anthony can play, that there could be a place for him as a contributor on a Lakers’ team that is young and continues to battle injuries. Brandon Ingram is the latest casualty. His sprained left ankle will keep him for at least the next two games.

And, broadly speaking, James does not want to see Anthony’s career end either with the Houston divorce or the 10-time All-Star playing out the string in this season in a market where he doesn’t want to be.

Just when you think Melo’s playing days in the NBA are over, you forget that there are members of his banana boat crew that still pull some serious weight with their respective franchises. Sure the first stop didn’t work out so well, but is anyone really surprised that another one of Melo’s friends is willing to keep him around? Now this is just speculation, but make no mistake, if LeBron and his camp think Melo can play, and there’s a possibility for the Lakers to bring in Melo, they are going to do just that. Despite the pretty large sample of evidence that tells us Melo’s washed, it will be yet another cycle of a fanbase convincing themselves that maybe it can work. It’ll go something like this

“You know, all this team needs from Melo is to stand in the corner and knock down an open look!”

“Remember how motivated Melo was on Team USA, I bet LeBron can get him to that level again!”

“Who would you rather gives those minutes to, Beasley or Melo? Exactly!”

We’ve seen it time and time again, and the results are always the same. I think it’s pretty telling that NBA executives and teams around the league all agree that ya know, maybe Melo’s time has passed, and yet there are his buddies willing to go out and throw him a bone. Do the Lakers really need Melo? No. Is there a chance he ruins the good chemistry that team seems to have so far this season? Of course. Remember this was a guy who in October said he was fine coming off the bench in HOU, and then like 3 weeks later changed his mind and was ultimately released.

As someone that hates the Lakers, I would love for this to happen. I already know it’s not going to work and it would be pretty entertaining to watch. If I was a Lakers fan, this would terrify me. Everyone knows that when LeBron wants someone he usually gets his way, and considering he makes this roster I don’t think you can completely rule it out. While it’s unfair to say that Melo was the problem in HOU, I think we can all see after their post Melo life that he most certainly was not the issue, I do think it’s fair to say he is not the player he once was. Still a HOF talent, still one of the best scorers in his prime, but he’s a shell of himself on both ends of the floor at this point. If that wasn’t the case he would have already been scooped by someone, and it’s no coincidence the only sniff we’ve heard about is coming from a team where one of his best friends plays.

If I’m LeBron, I can understand wanting to throw your buddy a life vest and give him one last shot, but things are going too well in my opinion in LA to even think about messing with the chemistry of this team. We all know you need shooters around LeBron and Melo has seen his shooting dip from 43% to 40% over the last three years, including 35 and 32% from deep over the last two. To put it simply, he’s not the shooter you need, in fact he’s the exact opposite.

But we know how this works. LeBron will get his way, Melo will become a Laker and it probably won’t work. Next up, we’ll see him say he’s ready to get into shape and to work, and Wade will bring him to MIA before ultimately he calls it quits. It’s sad when you really think about it.