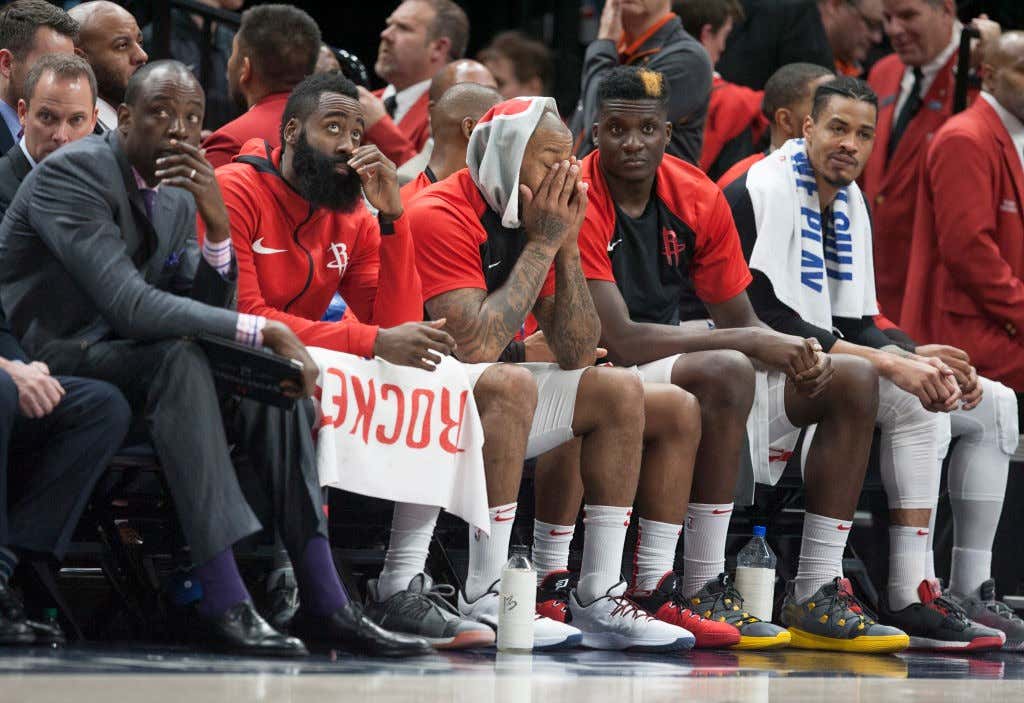 Happy Friday everybody and welcome to another edition of Last Night In The NBA where we bring you up to speed on everything that happened from the night before in the Association. Unfortunately, the league only put 3 games on the schedule last night so if you’re looking for this blog to take up a chunk of your morning, you may have to read it a few times over or something because it was a relatively light night of hoops. In the event you watched the gross TNF game instead, here’s what you missed.

The Celtics blog will be up later so we won’t spend much time talking about a team that has won 4 in a row, owns the longest current winning streak in the East, or is just 2.5 games back of the 2nd seed. Instead, we’ll just talk about the Knicks, who came into the Garden and did exactly what they were supposed to do. Get a good night from someone, last night it was Tim Hardaway Jr

who had 6 of his 7 makes come from behind that arc, and then Mudiay had a decent 17/6 although he wasn’t all that efficient. As a team the Knicks finished with just 39/34% splits, and its never great when you have 21 assists and 16 TOs. Unfortunately they trailed the entire way, got down early and then never were really able to make it close. Given how different it was the last time these two played at the Garden, this performance was much more aligned to the Knicks we’d seen all year. Now 4-11 on the road, they are doing their best to get right back into the thick of things in the race for Zion.

The Suns truly are incredible. Nobody, and I mean nobody can go on a losing streak like them. Now 1-12 on then road, why they were even on TV is anybody’s guess. They are already without Devin Booker for a while with his hammy injury, and their latest change was removing DeAndre Ayton from the starting lineup. They went small against POR and as you can see it made virtually no difference. They finished with 38/18% splits and no player over 15 points, and while Josh Jackson finally may have shown some life, they still got their dicks kicked in so what difference does it make

It really is impressive how bad these guys are, and I don’t think just trading for a point guard is going to solve all that much. For the time being they are going to be the team you want to play when you need to fix your issues, so that’s nice of them.

For POR, this is what they needed after losing 3 straight and 6 of their last 7. When things aren’t going so hot just wait for PHX to get on your schedule and you’ll be fixed in no time. Playing without CJ McCollum who has an ankle issue, it was up to Dame to carry the load which he did, as every other starter did not even break 10 points. In fact two players on this team had nearly half their total, with Dame notching 25 and Jake Layman 24 off the bench

That was a career high for Layman so way to go! The Blazers now have MIN/HOU/MEM/TOR/LA/MEM/UTA up next, so let’s see if this win did anything to help them build some momentum because things get infinitely more difficult moving forward.

OK, the Rockets are broken. After getting down 27-18 after one, you may have thought that was rock bottom, but they followed itup with a 38-11 third quarter. I’ll have you know this was a game in which Harden/Capela/CP3 all played in, and before when that happened this group was practically unbeatable. Instead, they couldn’t even crack 100 and shot 8-356 from deep. Harden was a mess with 7 TOs, and he and Paul combined for 12 of their 23. The Rockets have now lost 6 of 8, and nothing seems to be working. They can beat bad teams sure, but they made a Jazz team, who lost a key member early, look like world beaters. I don’t even know what to say right now, is it possible the Rockets window is already closed?

For UTA, pretty bullshit that Rudy Gobert got tossed just 3 minutes into this game, especially considering he just called out the refs after their game against MIA.

He had every right to be pissed there. The good news is his team picked things up in his absence, shot 50% from the floor, and got contributions from practically everyone that played

The Jazz have now won 4 of their last 5 and have a decent schedule of SA/OKC/MIA/ORL/HOU up next, so there is definitely an opportunity fr them to get back into the lower seed discussion. More importantly they need home wins, so last night was big for them. Always nice when you can have a blowout win like this on a night where Donovan Mitchell was basically a non factor with his 6 points on 3-9 shooting, mostly because that doesn’t happen very often.

And that’s it! You’re now all caught up on everything that went down last night in the NBA. We’re back tonight with a full slate of 10 games, but it’s Friday so go live your life and I’ll tell you all about it tomorrow.