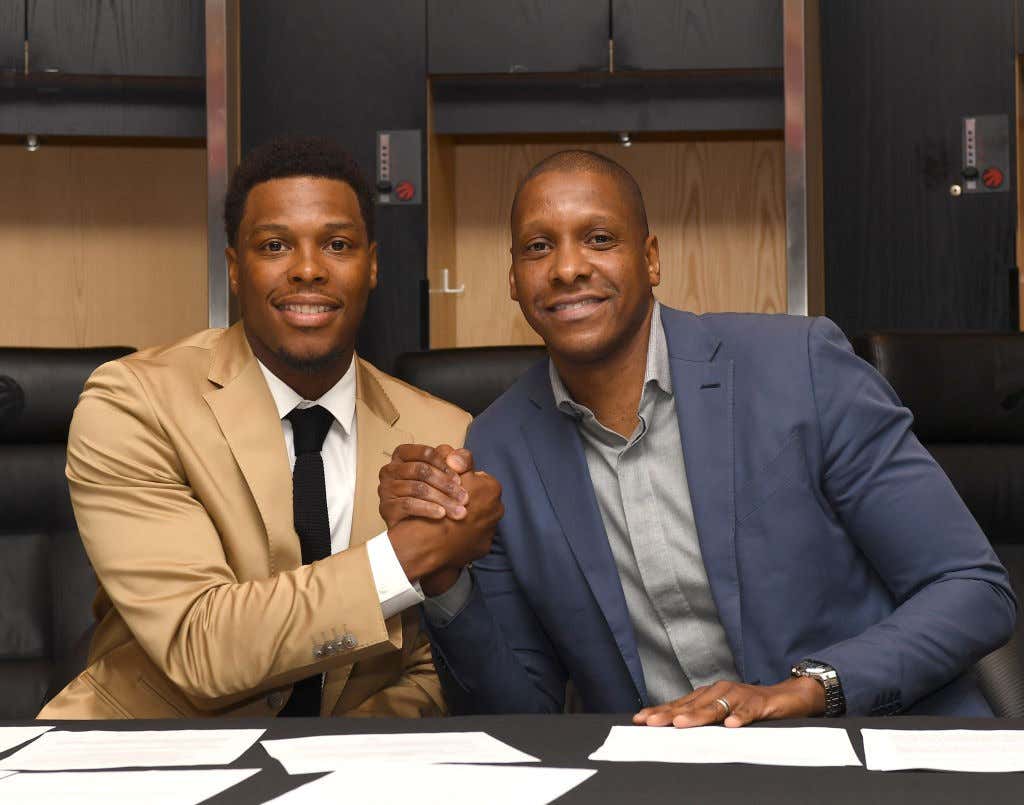 Reags touched on this yesterday in regards to Kyle Lowry feeling betrayed because he felt DeRozan was betrayed, but he left out the juiciest part of that entire interview. First, here’s the sit down with Rachel Nichols in full

You guys catch it? This is the part that stood out to me and made my ears perk up

Does that sound like a guy that has no issues with his GM? Remember, this is the same dude that gave Lowry that 3/100M extension and made it clear he was choosing Lowry over DeRozan moving forward. I get that he traded his best friend, but look at how he answered that question. That’s not what someone does if there’s no beef there. As you can expect, Ujiri is already doing damage control, as he had this to say about the whole situation

“It’s been like that with Kyle since I came here,” Ujiri said of their neutral but professional relationship. “We’ve never — we don’t have a confrontation. We don’t — I’ve never done anything wrong to him. It’s just this kind of decision-making that we have to go through. And I know how Kyle is, so honestly, I love him to death.

“He plays basketball the right way. He gives it his all, you know. And I’m so used to it. And you know he has a good heart. And I know that I haven’t done anything wrong to him. I didn’t trade him.”

Now the unique thing here is that while Lowry clearly has an issue, it hasn’t impacted the Raptors at all on the court. That’s pretty rare because when one of your best players is unhappy with the guy pulling the strings, chaos usually follows. In my opinion these two are pretty much stuck with each other because how many teams are lining up to take on Lowry’s contract considering he’s already 32, and obviously Ujiri isn’t going anywhere. It sort of feels like Ujiri just wants to tell Lowry to grow up and get over it, but of course he can’t be that blunt and direct. Instead he has to toe the company line that nothing is wrong, that these two have no problems and all that bullshit. Again I ask you to watch that clip, and look at Lowry’s face. That tells a much different story.

After beating the Sixers last night the Raptors have continued to show that not even a beef like this is going to get in their way, but it’s definitely something to keep in the back of your mind going forward. What if the Raptors struggle again in the playoffs and Lowry once again underachieves? Do we see Ujiri make a move? We all know the Raptors are taking a huge risk with Kawhi, and if he bolts and Lowry is left on this team by himself on the back nine of his career, how do we think he’s going to take that. It’s storylines like these that make the Raptors so interesting to me because as we know winning cures all and the Raptors have clearly done their fair share of winning so far this season, but despite that success Lowry still hates his boss.

In a sense Ujiri is stuck because he can’t move Lowry while Kawhi is still uncommitted, but at the same time this sort of feels like a ticking time bomb. As long as Lowry maintains his high level of play I’d be willing to bet Ujiri will put up with almost anything, but at the same time when you are walking on eggshells around Kawhi and his situation, this type of drama is the exact opposite of what you need.