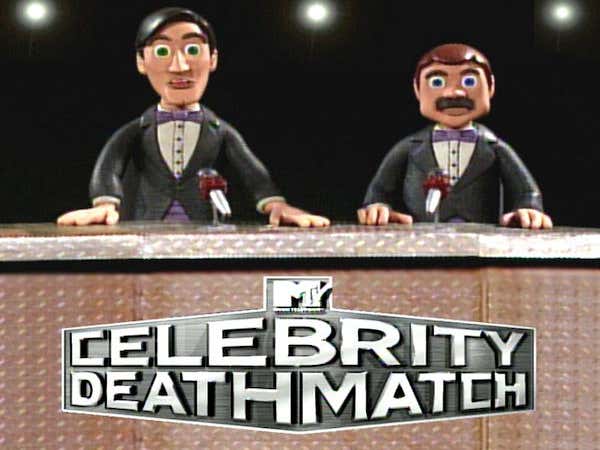 Deadline- MTV Studios is reviving another classic MTV series, Celebrity Deathmatch. The recently launched studio is developing a reimagined version of the cult-favorite claymation stop-motion satire that skewered celebrities, politicians and everyone in between during its famed original 1998-2002 run. Ice Cube is attached to star and will executive produce alongside his partner Jeff Kwatinetz through his Cube Vision production company. Series creator Eric Fogel will return to executive produce as well, with additional showrunners and talent to be named shortly.

LETS GET IT ON!!! I guess MTV decided to keep the reboots coming after announcing they are bringing back Real World, Spring Break, Daria, Aeon Flux, and like 100 other shows from the 90s. And I do not mind this one at all because there are very few things that stand the test of time than watching two claymation versions of celebrities beat each other to a pulp in an absolutely ridiculous fashion. Baseball, Christmas music, and watching cartoons with the audio replaced by rap lyrics are three examples of the staying power of Celebrity Deathmatch. I mean here are some old matches that will immediately suck you right back into the glory of this show.

Add in the creative mind behind Friday, The Big 3, and classics like It Was A Good Day and you are cooking with gas (as long as they don’t neuter the show and let it keep the edge it had back in the day). Not only is Ice Cube talented as fuck, but he also has a 1-0 record as a fighter in Celebrity Deathmatch.

And the best part about all of this is that after a fight airs, there is always a legit chance it ignites/reignites a feud between the two celebrities on social media which ends with them looking to settle it once and for all in real life in the middle of a Rough N Rowdy ring.

P.S. Looking back, it’s unreal the career glow up that Mills Lane had in the late 90s. Guy refs boxing for 25+ years in relative anonymity, by the grace of God ends up reffing the fight where Mike Tyson bit a piece of Evander Holyfield’s ear off, and then becomes a claymation ref in a cult classic that probably led to some big fat royalty checks while getting his own daytime court show called Judge Mills Lane.

All because he was the third guy in the ring the night Mike Tyson tried to eat Evander Holyfield’s ear. Only in America.