“You seem to say pretty much exactly what you feel like saying, and all your writers—Francis Ellis, one of my favorites—on your site, seem to have the same attitude.” —Tucker Carlson, 2018

Last night, Dave went on Tucker Carlson’s show for the tenth time. I used to record these appearances but last week, Dave forgot my name during the telethon. That made me realize that the “friendship” we had was a complete fig newton of my imagination. Did it sting? You bet. I challenge any of you to spend two years dancing in Miami with a guy, planning outfits to please his eye every morning, and even going so far as to perform your own (extremely painful) circumcision with a fruit peeler just to have more in common with his cultural leanings, only to have him forget your name as he introduces his staff on camera.

Look, we’re cordial. We maintain a respectful, professional rapport for the sake of the uncomfortably young, borderline inappropriate children of Team Portnoy. But the warmth—nay, the heat—has seeped out of our exchanges like a hot towel on an airplane. To put it in his terms, our perfect New York slice went from a tangy, crispy 9.2 to a floppy, greasy, lukewarm 5.9. We’ll eat it, but we won’t enjoy it.

With Dave out of the way, I was ready to get back out there. And like a rent-controlled pre-war studio with a washer/dryer in the West Village, I wasn’t on the market long. Over Thanksgiving, I flew down to the Floridian island of Boca Grande to spend some time snorkeling for sand dollars in a long-sleeve Lululemon shirt typically meant for land-based activities. Other members of society’s elite who vacation there? President George W. Bush, Nick Saban, Dabo Swinney, Brit Hume, and of course, Tucker Carlson.

I first saw Tucker outside the all-white tennis club (calm down, it’s the dress code). He was walking down the street in a Patagonia down vest and shorts with hair so full I wanted to ask him for a quick sniff but figured I’d better start with hello, I’m Dave Portnoy’s best friend (this was before the telethon snub, when we were still close). I chased him down in my tennis sneakers, kicking court clay off my heels from the ladies clinic I’d just left shattered, humiliated, and icing their pathetic knees. After just a minute of conversation, we became fast friends. He even suggested we take a picture, which I did, because it was actually my idea. Sorry I lied. I am excited right now.

From there, things moved quickly. I saw him at the beach club the next day. He was surrounded by family but he broke away to tell me that a number of people had sent him links to blogs I’d written. Then he asked me for my phone number, which I gave him because it was actually my suggestion—sorry, I can’t stop fibbing. We texted a few times, but I know how to play the long game with men of status. Upon receiving a message from Tucker, I would set a timer for six hours and hand my phone to my mother, demanding that she prevent me from touching it until the timer went off. It was hell, but by holding off with my answers, I ensured that Tucker thought I wasn’t desperate. And that’s how you become friends with famous people.

That was a few weeks ago. Things cooled off after that. Neither side wanted to overstep the delicate foundation we’d built in Florida. Plus, we both have lives away from each other. I mean he’s got so much going on these days. The network is asking so much of him. Obviously it’s hard for me, but I’ve occupied myself by writing hit pieces on my smallest coworkers. If I’m being honest, there were times when I started to despair. I’d type out messages but second-guess my tone and delete them in a huff.

You’re not his weed dealer.

“Hi Tucker, want to see a video of me dunking?”

He might not even play basketball you piece of shit.

Things came to a head last night when I decided to delete his phone number for the sake of self-preservation. It was the nuclear option suggested by my therapist who just happens to be a radical liberal even though she’s out of network for every single goddamn insurance plan on the planet. But as my muscular thumb trembled over the delete button, a twitter notification popped up. And then another. And another. 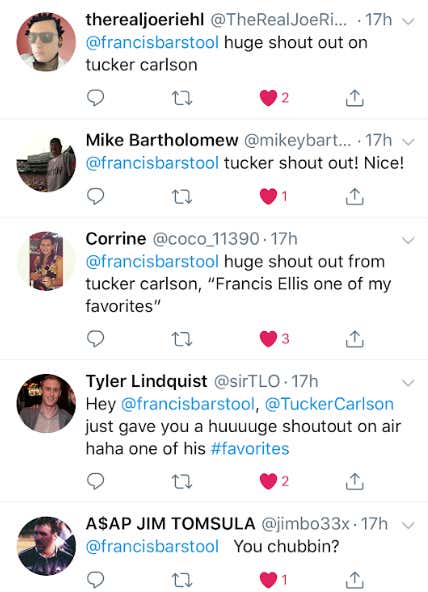 What? Where?! For the love of God, somebody find the clip! Are we back?!

And then I saw it.

Normally, I’d make a joke here about how I dissolved into a puddle of my own fluids. But I’ve lied enough already in this blog. Here’s what actually happened:

First, I marched straight to the post office to register as a Republican. Once that was sorted, I wrote a letter to my parents explaining that I would no longer be coming home for Christmas, for I couldn’t bear to spend Jesus’ birthday with a group of pagan communists. Ironically, I wrote it on the personalized, 110-lb stock stationary they gave me last year for my birthday. Those cards are extraordinarily stiff, perfect for cutting fat fishtails of blow before a nephew’s christening or a court appearance. God those ceremonies are long.

Next, I wrote a letter to my family’s financial advisor asking how much of my trust fund I could withdraw in cash. But as I was halfway through that letter, I realized I should call them instead; I couldn’t risk the letter to my parents arriving before I’d had the chance to wrest control of my money from their whiny, anti-fracking PETA paws. But as I jumped on my phone to google the number for our wealth manager, I received a notification from our wireless carrier saying that data overages would now apply because I’d exceeded the limit on our family plan. Out of spite, I started downloading the entirety of Lord of the Rings III on my phone. As if I care! I don’t see those bills.

Soon, this flurry of correspondence had me dizzy with hunger, so I dipped into my monogrammed tote for a bite of polar bear jerky. It’s extremely expensive due to the big government laws surrounding the harvesting of polar bear meat. But good lord, is it lean. Not a smidgen of fat on a strip of PB jerky, thanks to how much those bears are starving. It’s like chewing through a seatbelt. In fact, a general rule of thumb is that the more endangered a species, the healthier it is to eat. And people wonder why my jawline is so chiseled…

With all my bases covered, I retired to my quarters a new man. As I waited for my heart to settle down, I texted Tucker:

“Thanks for the shoutout. You made my week.”

I haven’t heard back. But if I know him as well as I think I do, he’s working on it.