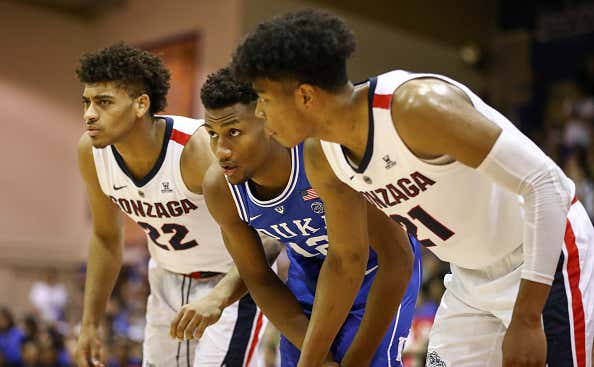 Did your team not make one of the 341 bowls? Can’t relate. What I can relate with is you’re now likely ready to sit here and watch some hoops – looking at you Kansas fans. Perhaps you’re just looking for some time to kill. Either way, I’m here to help you as we’re exactly 1 month into the college basketball season. It doesn’t seem that long ago that we opened with the Champion’s Classic, but here we are. So consider this a cheat sheet

So what now? I threw the question up on Twitter so some of the topics will come from there as well as simply what I feel like talking about. Either way, if you’re joining the college hoops season, welcome.

The Top-5 has separated themselves with one team right behind
Right now there is a clear top-5. That group of Duke, Michigan, Gonzaga, Virginia and Kansas is the consensus top-5. We usually see this shake out early in the season where there’s a first tier of teams. I’d say it’s these five and then Nevada is trying to get in that group. They already have road wins over Loyola and USC, which make of that as you will, but will have a chance to beat Arizona State on a neutral court. I think they are in that first tier of teams, making it a group of 6, but think they are just a bit behind of the top-5. This will obviously change as the season goes on and players develop and injuries happen, etc., but right now this is tier 1.

The Big 10 is having a dream start
This is about as good of a start as the Big 10 could ask for. This is a conference that has been down the last couple of years and this year was expected to be the 5th conference again. That’s not the case right now thanks to teams like Ohio State and Wisconsin exceeding pre-season expectations while Michigan racks up some of the best wins in the country.

The Pac-12 is a disaster
There’s no other way to put it. This league is a disaster right now. Yes, I know Oregon doesn’t have Louis King, but that’s not going to fix everything. Yes, Arizona and Arizona State have played well to start the season. But, UCLA doesn’t have a quality win. Oregon lost to Texas Southern. Washington has not looked like that borederline top-25 team yet. USC hasn’t been 100%.

The A-10 is even more of a disaster
I know we have some A-10 people here. I’m sorry. This league stinks out loud. URI is obviously in a bit of a rebuilding year. Dayton is still a year away from really competing in the top-25ish again. George Mason has been one of the most disappointing teams in the country. St. Joe’s continues to be inconsistent. Right now it’s Davidson and St. Louis hoping to turn this into a 2-bid league. Not great for what was always the 7th or 8th best conference.

Most disappointing starts to the year:
Oregon, West Virginia, Miami

The NET is here and it’s pointless to freak out just yet
The NET has replaced the RPI as the key component for the NCAA Tournament. While the RPI was absolutely outdated and it’s good to see some change we still don’t know what the NET is just yet. The worst thing the NCAA did was release the rankings this early. They did it with a small sample size and everyone lost their mind. We’re starting to see the rankings even out a bit, but we still need to see more of what the NET is.

Current Top-25 team that won’t make the NCAA Tournament:
Furman. Listen, I get they beat Loyola (most overrated team in the country due to the Final Four last year) and won at Nova. That’s impressive. But, this isn’t the 25th best team in the country. KenPom has them in the 120s. They are somewhere in the middle. I mean are we sure they are even one of the two best teams in their own conference with UNC-Greensboro and Wofford? In a 1-bid league this is a no-brainer.

Team receiving votes that can take a big leap:
Iowa State. The Cyclones have been nowhere near 100% and I really like this team if they get everyone healthy/back from suspension. They have a unique player in Horton-Tucker. They have some stars in Wigginton and Weiler-Babb. They have roleplayers around them. Shayok is a guy that can really improve this defense.

The hook and hold is ruining the game
I blogged it earlier this week, but this is just awful. It’s a point of emphasis this season and it’s leading to flagrant foul calls for plays that aren’t even fouls. We’re seeing more time at the monitor, we’re seeing more fouls. It’s just bad all around. Hopefully the trend of refs stopping to care about a point of emphasis in January happens.