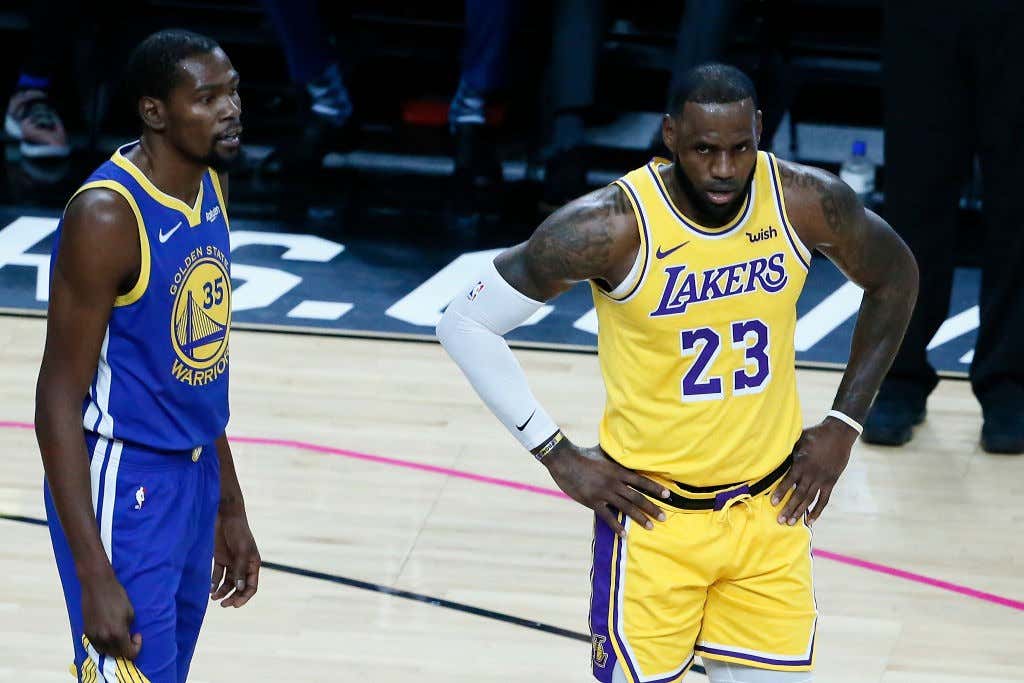 The biggest mystery in the NBA right now is who the next superstar is going to be to team up with LeBron in LA. We hear rumor after rumor from Damian Lillard, to Kawhi Leonard, to Jimmy Butler, to Kevin Durant. We all know they have cap space and LeBron signing on for four years means he believes others are going to come join him. However, we’re also hearing how players may not want to join the LeBron circus, and Bleacher Report put out a very interesting story on this exact issue.

While some of the players interviewed are big names, the only one I really care about is Durant, seeing as how he is about to be a free agent in the same summer the Lakers are going to have a shit ton of room. Here’s what Durant had to say about it

“It depends on what kind of player you are,” Durant said. “If you’re Kyle Korver, then it makes sense. Because Kyle Korver in Atlanta was the bulk of the offense, and he’s not a No. 1 option at all, not even close. So his talents benefit more from a guy who can pass and penetrate and get him open.

“If you’re a younger player like a Kawhi, trying to pair him with LeBron James doesn’t really make sense. Kawhi enjoys having the ball in his hands, controlling the offense, dictating the tempo with his post-ups; it’s how he plays the game. A lot of young players are developing that skill. They don’t need another guy.”

“Kevin Love, he had to totally change his game to fit, to be a shooter,” Durant said. “Which, I think, he deserves way more credit for switching his game. Bosh, same way. LeBron is a player that needs to play with guys that already know how they play the game—and shooters. Like, young players that are still developing, it’s always going to be hard because he demands the ball so much, he demands control of the offense and he creates for everybody.”

“So much hype comes from being around LeBron from other people,” Durant said. “He has so many fanboys in the media. Even the beat writers just fawn over him. I’m like, we’re playing basketball here, and it’s not even about basketball at certain points. So I get why anyone wouldn’t want to be in that environment because it’s toxic. Especially when the attention is bulls–t attention, fluff. It’s not LeBron’s fault at all; it’s just the fact you have so many groupies in the media that love to hang on every word. Just get out of the way and let us play basketball.”

Now, we know that Kevin Durant hates the media and the blog boy culture, and to me you combine that reality with the circus that is the Lakers and the media attention that would come with joining LeBron, it makes sense as to why Durant may not be interested in that move this summer. But could it be possible that for someone who hates the media, it actually makes sense to team up with LeBron who will demand all the attention? I know Durant wants to be THE GUY, but at the same time wouldn’t it be the perfect cover for Durant to join time team and let everyone focus on James?

But for someone who “hates” drama and media bullshit, I think for that reason alone Durant is going to avoid the move to LA. Of course you look at some of his other options like NY, and I wouldn’t exactly say that is a media market in which Durant would thrive in. If he thinks things are bad now, just wait till he struggles as a Knick. It’s because of this that I really think Durant stays in GS, as least for a little while longer. At least until their run is truly over, which it certainly is not.

I will say, I also found this quote interesting from Dame

“I love where I am,” Lillard said. “I play for a great organization. I’m not looking for nothing. I think we’d complement each other well, but the only way that ever happens is if my team decides they don’t want me no more. I’m trying to build something here.”

I would say Lillard has been one of the hottest rumored potential LeBron partners, and I feel like I should mention that the Blazers are currently 13-11 and the 8th seed in the West. In terms of his deal he still has two more years at $29M and $31M left after this season so he’s right, if he is going to end up as a Laker it’s because his team has to trade him. I don’t know how they get that close to making the money work, but remember LeBron signed on for 4 years, whose to say we don’t see Dame in LA for the tail end of that? On the surface it is a little crazy that players would be apprehensive to play with a guy many consider the greatest to ever do it, but as always with LeBron things are never that simple.

and the reality of them being teammates would be pretty terrifying. I just read those quotes and factor in how much Durant seems to hate media attention and I can’t see it happening. I will say though, if you thought he turned heel joining GS, imagine the reaction if he does in fact become a Laker. People will crush him even more. He’ll forever be known as a guy that had to ride the coattails of all time greats, and that’s a crazy and somewhat unfair narrative that will exist for one of the best players the league has ever seen.

July 4th will be here before you know it, and you can bet your ass there are going to be fireworks one way or another. Buckle up.