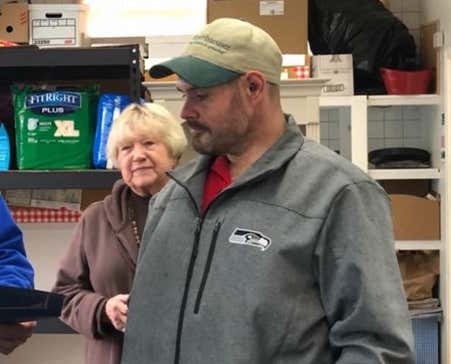 News Tribune- A surprise was waiting for Kevin Booth when he made an early-morning stop at the Sumner Food Bank three months ago. Booth, who’s homeless, found a brown bag on the ground outside the food bank’s community bread box.

“At first, I was like, what the heck is that lying on the ground?” Booth, 32, said in a recent interview. He put the bag on a trash can and reached inside. He pulled out a $20 bill. “Of course, I sniffed it to see if it was real,” he said. “Then I was like, do I take off or do I stay? He stayed.

When a food bank volunteer arrived a short time later he gave the bag to her, not realizing what was inside, said the food bank’s director, Anita Miller. “She went in to weigh it, thinking it was food,” Miller said. It wasn’t food. It was $17,000 in cash. Stunned, they called police. Officers determined the money was real and used security cameras to try to figure out what had happened. They couldn’t determine who dropped off the bag, but they did see who found it. “I got stopped later by (officers) and they told me what was in there and I just about fainted,” Booth said. “I’ve never touched that much money and I don’t think I ever will again.” Police kept the cash for 90 days, the length of time required under state law for someone to make a claim of ownership. No one did, so the money went to the food bank, which plans to use it to expand its building at 15625 Main St. E. where it serves about 1,000 people a month.

Booth said it felt good to be recognized by his hometown, and said he knows the food bank will put the money to good use. “There are a lot of people who would have taken it,” Booth said. “I’m just not that person.” After hearing about his story, a GoFundMe was started by a Sumner resident to raise money for Booth, with his permission.

To thank Booth for his honestly, Miller gave him part of the money in gift cards as a reward.

Congratulations Kevin Booth, you are officially the internet darling of the day! Being able to show that type of restraint and honesty despite not having a home was otherworldly. Integrity for days and honor for weeks. Eat your heart out Smitty!

Now since it is 2018 and all, I will admit that myself and likely every other reader is just waiting for the other shoe to drop and find out this is fake or that this is one of those The Social Network situations where someone thought “$17,000 isn’t cool, but you know what is cool? $1 million in GoFundMe cash”. But since it is the holiday season, I am choosing to believe that Mr. Booth is just a good guy that found a shit ton of money and gave it back because it was the right thing to do (as well as a pretty good chance that a security was camera filming him). Money doesn’t buy happiness, but I imagine unhappiness is free when you are homeless, no matter how many gift cards to Red Lobster and Olive Garden the food bank director gives you.

I like to think that I would do the same thing that Kevin did, whether I was a smut blogger with a huge mortgage tied to his neck or a homeless person occasionally venturing into food banks for a warm meal. But I can’t say for sure I would. I once found $100 in twenties on a New York City sidewalk while walking to my buddy’s apartment to watch the Giants-Bucs playoff game during the GMen’s march to Super Bowl XLII. I did what any good citizen would do, which is give a quick glance around to see if anybody was looking for money/filming me for a hidden camera show, realized I was somehow the only person for a one block radius, then quietly took the money on a very windy day so it didn’t blow into the subway grates and went about my day. Did I buy a dozen bagels for all my hungover friends with that newfound fortune? Yes. Was my honesty rewarded with a Giants championship against an undefeated Patriots team a few weeks later? I like to think so. Regardless, I look forward to the wide array of puff pieces on morning television about Kevin Booth’s impressive act followed by someone finding some sort of skeleton in his closet or hole in his story in an effort to turn the whole world against him. Hopefully Kevin can make it on to Ellen and meet Russell Wilson before that happens.