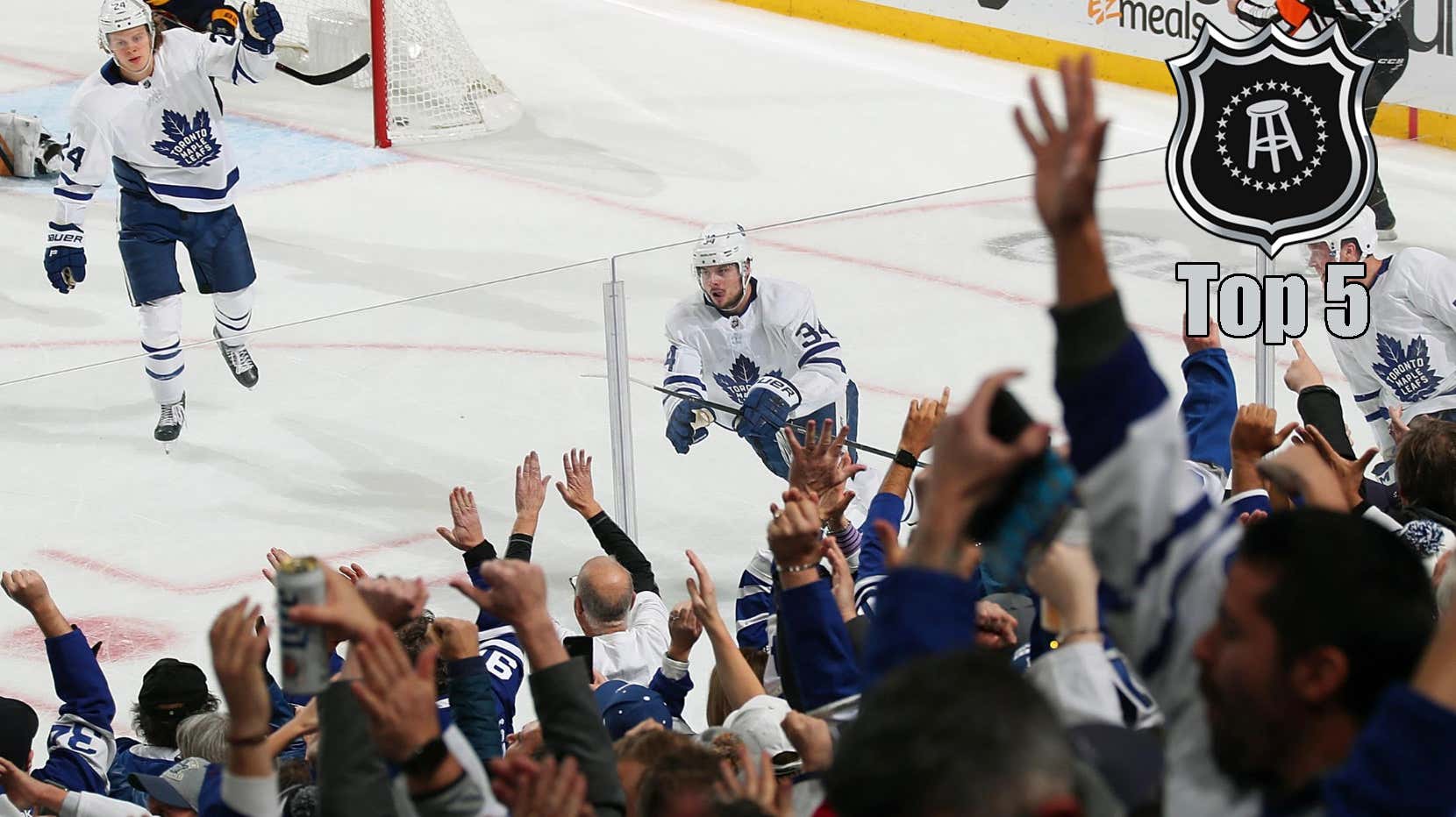 Here’s the thing. I realize that goalies aren’t always the smartest bunch of lads. Their brains work in mysterious, sometimes non-functional ways. A weird brain is what makes goalies the people who they are. But let me do a little thinking for them right now because I’m starting to get worried. I mean how many times do we need to see Auston Matthews load up from the left face off circle before these guys start to learn that they’re about to get a heat-seeking missile labeled for top bunk coming their way? We’ll get into it later but time and time and time again, Matthews has the puck from relatively the same spot and every time he snipes top shelf. Eventually goalies are going to have to change up the way they’re playing because the butterfly just ain’t gonna cut it against that shot. You can’t be dropping your body down while Matthews is going up top faster than the speed of light. I don’t know, I just think it’s ridiculous that no goalie has decided to change it up at this point considering nobody has had any luck playing that shot normally. But I digress.

Before we talk more about Auston’s nasty snipe in overtime last night, let’s get right into the top 5 goals in the NHL last night. Starting off with a little 3-for-1 action.

5. Patric Hornqvist With An Avalanche Of Goals In The 3rd Period

So last night in Pittsburgh, the Penguins got out to a 3-0 lead in the 1st period. Then I guess they figured the game was over and started to coast a little because the Avalanche came out to score 3 of their own in the 2nd period. So heading into the 3rd, it was a 3-3 game. But with 13:49 left in the game, that’s where Patric Hornqvist tucked away his first goal of the night.

A minute-twenty-one later, it’s Hornqvist again to make it a 5-3 game off a knuckler that bounced past Varlamov.

And then 86 seconds after that, it’s Hornqvist again to complete the natural hat trick and make it a 6-3 game.

The last 2 goals of that natty were both ugly as shit (pretty standard for Hornqvist) but that’s what makes them such daggers. Even if the Avs thought they could come back after Hornqvist scored 2 goals in 1:21 on them, that 3rd goal is just so deflating because it’s so damn ugly. Varlamov let’s that one by him and all of a sudden the boys on the bench are as deflated as the Pats balls on gameday. Are people still making Deflategate jokes? If not, I’m bringing them back. But yeah, 3 goals in 2 minutes and 47 seconds for Patric Hornqvist to record the fastest natty hatty in Penguins’ history. Not too bad.

4. Josh Leivo Is Going To Fit In Just Fine With The Snipe Squad In Vancouver

The Toronto Maple Leafs traded Josh Leivo to the Canucks on Monday. The reason for that being that Toronto had promised Leivo that if Nylander was coming back and it would impact his ice time, that they’d move him to a spot where he’d be a better fit. Every once in a while you’ll see the business side of the NHL take a back seat for the player and that’s pretty cool. So with Leivo not really having his spot on the Maple Leafs’ depth chart anymore, he moves over to Vancouver where there are already a couple of studs in Brock Boeser and Elias Pettersson. Both of these guys murder goaltenders for a living. So you figure all you have to do once you get to Vancouver is pass the puck to either of those guys and you’ll start racking up assists. But turns out the opposite happened. In his first game as a Canuck, Josh Leivo got his 1st goal with the team with assists coming from Pettersson and Boeser.

The GIF doesn’t do it justice since GIFs don’t have sounds. But Leivo rang that shot so hard off the left pipe that to an untrained eye, you would think he sniped that top right corner. So let this be a warning to all the nets out there. If you are the back of the net and the Vancouver Canucks are playing–specifically with Boeser, Pettersson and Leivo on the ice–you are going to get crushed. Nothing you can do about it.

This is a goal right here that Zach Werenski, Seth Jones and Sergei Bobrovsky are all going to want wiped off the internet. I mean those are Columbus’ guys right there. Their top 2 defensemen and their Vezina winning goalie. And Johnny Gaudreau just took them all behind the shed and put them out of their misery.

What a screengrab right here. 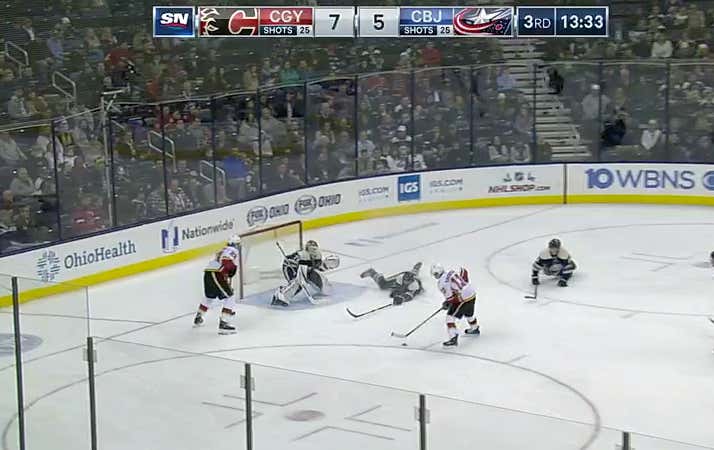 “Help! I’ve fallen and I can’t get up!” – Werenski and Jones, probably.

All Johnny Gaudreau has to do is hit a little hesitation move, cut across the middle and he puts 2 defensemen on their ass. And then he stuffs it past Bobrovsky with so much ease. Granted, it was the 8th goal of the game allowed by Bobrovsky and he might be doing everything he can right now to get traded out of Columbus. But I bet Gaudreau was a little disappointed with how easy that was. After putting Werenski and Jones on their ass, you’d figure he would want to cap it off with a nasty dangle on Bobrovksy. Instead he just has to tuck it away 5-hole like he’s going up against a shooter tutor. Jonathan Hockey. What a stud.

2. Mathieu Joseph. The One Hando Bando

Poor Jimmy Howard. How many highlight reel goals does this guy need to have scored against him this season? Seems like every damn week he’s ending up in the Top 5 Goals Of The Night blogs. And each time there’s almost nothing he could do about it. Last week was Panarin banking a pass off the end boards to Pierre Luc-Dubois a la the Sedin twins. And last night it was Mathieu Joseph with the one-handed reach to put that puck on an elevator and send it straight to the top floor.

Physics be damned on that goal right there. Obviously the puck being on its edge gave the advantage to Joseph but that puck was still a good 5-feet in front of him at the time. No chance in hell does Jimmy Howard think that Mathieu Joseph can not only reach out to make contact with that puck, but put enough on it with one-hand to go top shelf. So he does the math in his head, determines that he has the time and the room to throw a poke check, and that’s how he ends up on a GIF getting dunked on. Might just want to retire after this season. It’s getting to a point where I don’t know how much more one man can possibly handle.

1. Auston Matthews Is A Certified Killer

I’ve said it like 7 times before and I’ll say it at least 14 or 15 more times again. That left face off circle used to belong to guys like Ovechkin and Stamkos and Laine. All right-handed shots who would post up in their office there and unleash clap bombs for days that would destroy the back of the net. But what Auston Matthews has done so far this season is make that shot his bitch. Left face off circle. Left-handed shot. A little drag&curl on the load up and then a release that should be bottled up, turned into a powdery substance, chop that powder up into little lines and then delivered to the body via snorting through a $34 bill. This shit right here is art. 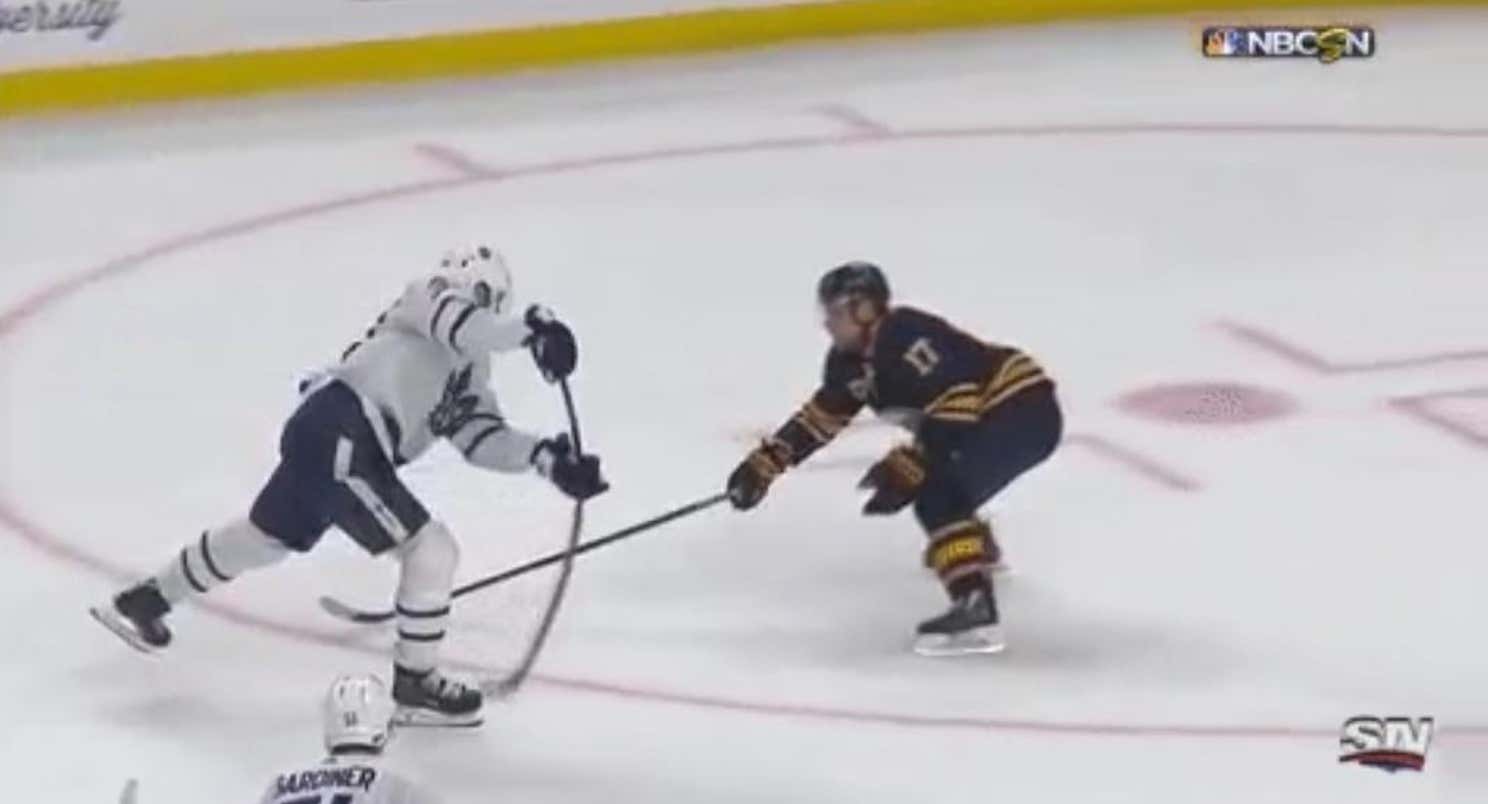 Like I mentioned at the top of this blog–if I’m a goalie in the National Hockey League and I see Auston Matthews getting ready to pull up to his favorite spot, I’m staying up. I don’t care if the puck goes in or not. But I’m just not dropping down because I know it’s going to make the inevitable Matthews highlight look even better. Just stay standing up and pray that he accidentally hits you with the shot. You see that flex right there. No shot in hell is he thinking about going anywhere else besides right underneath of that crossbar. Just stay standing and pray that you get hit with the hardest rocket of your life. Because even if you drop down and still get a glove on that shot, the puck is ripping straight through that glove. Your glove is no match to Auston Matthews. So stand up and try to take that shot to the throat like a man. At least you can die with some dignity.

P.S. – I understand that Toronto and Buffalo are practically neighbors but yikes. The crowd reaction on this goal makes it look like it was a home game for the Leafs. Matthews vs Eichel. Two of the best teams in the Eastern conference going head-to-head and it’s a home game for Toronto on the road. Get it together, Buffalo.