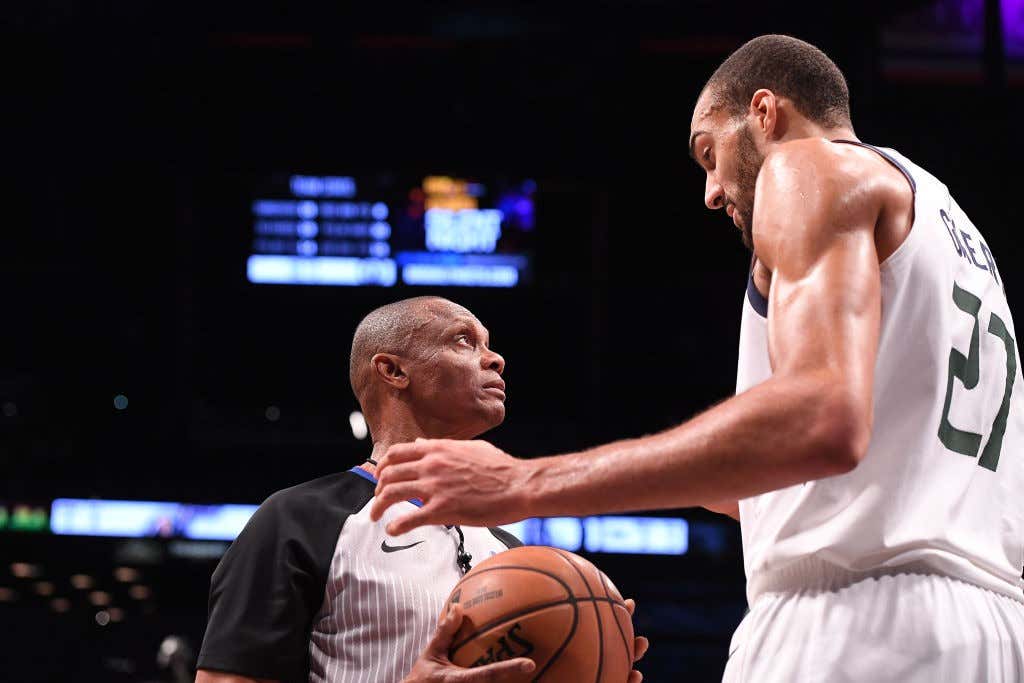 (NBC Sports) – In the final moments of the Jazz’s 102-100 loss to the Heat yesterday, Utah guard Donovan Mitchell missed a shot amid contact from Josh Richardson. On the other end, Dwyane Wade drew a Rudy Gobert foul and hit the game-winning free throws for Miami.

Gobert, via Andy Larsen of The Salt Lake Tribune:

“I just want it to be consistent, at one point. Every night is the same s—. Every night has been the same s—. If you call something one way, you have to call it the other way. Once they start doing that, I’m going to have a little more respect. I’m just tired of it. Every game is the same,”

“They can’t be deciding the issue of a game just like that. If you call a foul on the play on D. Wade, Donovan got pushed harder right before. But he’s not Dwyane Wade, it’s fine,”

“We’re a small market and we know it,”

Look sometimes you just have to get things off your chest even if you know it’s going to hurt your wallet. No chance the NBA lets Gobert slide after these comments from the other night, but that’s not the point of this blog. My question is, does Rudy have a point? While I don’t think anyone has to explain to him that superstars get different treatment from officials than a second year player, could it be possible that the Jazz are being picked on because they are a small market?

Sadly, the evidence does not support his theory.

The Utah Jazz are 4th in the NBA in FTA with 26.4 a night. Their FTr (free throw rate) of 0.316 is third in the league. Safe to say the Jazz get to the line better than almost any team in the league. How can that be true if they are a small market and the refs have it out for them? If he was referring to just that play, that MIA got the call because they are a big market and the Jazz got screwed because they’re a small market team, I’m not sure how that makes sense. Guess what Rudy, you fouled Wade. Period. However, in my mind Gobert’s beef is more a star issue than an NBA market issue.

It annoys me when I hear stuff like this. That because a team is a small market, that’s why things play out a certain way. The Jazz are having a tough season, is that because they’re a small market team? In my mind you can’t have it both ways. You can’t be wanting to be considered among the better teams in the league, have some success, and then once things don’t go your way you cry “small market”. Guess what, over time as Donovan Mitchell plays well and hopefully has the type of career Jazz fans want, he’s going to get those superstar calls. That’s how the NBA has always worked and it has nothing to do with the market. If you’re a shitty player on the Lakers or Celtics you don’t get more calls. If you’re LeBron or Kyrie you do. That has nothing to do with the market they play in as much as it does their status in the league. Take Westbrook for example, he plays in a small market in OKC and gets to the line all the time. Same thing with Giannis. According to Gobert, they shouldn’t be getting that treatment because they don’t play for a big market team.

I get it, he was frustrated because the Heat had a sizable FTA difference in that game, but the overall numbers this season just don’t support his claim and therefore I am going to have to reject it. The Jazz didn’t get boned because they play in Utah, they got boned because Wade is a star.