WSJ – Canned tuna, a lunchbox staple from the 20th century, is fighting to keep its spot in American cupboards. Century-old tuna companies like StarKist Co., Bumble Bee Foods LLC and Chicken of the Sea International are trying to reboot demand for tuna fish—selling it in cans, pouches and kits with trendy flavors or as a healthy snack—as they seek to hold on to their dominance in a shrinking market. “In order to bring excitement back to the category, we have to be more creative,” said Jan Tharp, Bumble Bee’s interim chief executive officer. The traditional tuna makers are facing problems that have plagued other providers of packaged foods, such as soup. Canned tuna is struggling to connect with younger generations who favor fresher, less-processed options. It is also dealing with competition from newer and fancier brands, which see an opportunity to innovate in a category they think big brands have let slide.

Not on my poor man’s free sun dial. Canned Tuna brothers, UNITE! Ok, I have since graduated from eating almost every meal straight from a can which included fish, mercury, and possible alien beings (Seriously, look at this thing – LOOK AT IT!): 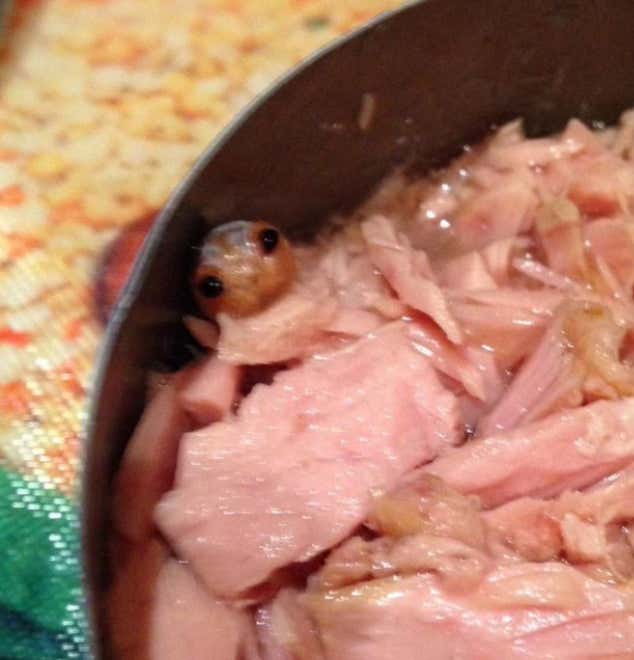 Why have I moved on from canned goods that could conveniently be placed in any cubbard or carried in any hobo’s bindle? Well, (attempted) dignity for one. Also, Tuna pouches are as life changing as it gets. That and silverware. Three big things. But even so, canned Tuna is a necessity for the up and comers of this world who have to scrap by to survive. How else are you supposed to know what rock bottom feels/tastes like? There was a point in my life whenever you entered my residence and all sorts of pride was checked at the door. We’re talking the days when I had denim pull-out couches in my living room for Christ sake. Cereal, pasta, and beer were main food groups and it was a momentous moment when a Brita filter magically appeared in the fridge. Tere were (and shomehow still) are times when drinks are being consumed out of a beaker (s/o Gaming Chalice Of Life) or legit soup bowl for lack of glassware. Canned Tuna help me survive the lowest of lows and should continue to be an accessible and cheap substitute for food.

Damn you, Millenials. Do we even want to live in a world without canned Tuna? Maybe. Regardless, I feel for this PR guy representing Big Fish. However, anyone who feels the need to utter the phrase “We need to bring excitement back to canned tuna” probably needs to reevaluate a lot of things. That or follow the Japanese rule of tuna marketing and just make a bunch of extremely weird commercials. That could work, too.