Couple quick thoughts as this news just broke. First, Fred Hoiberg is a nice guy, a decent coach, and someone that got caught in a situation where he was simultaneously in over his head and set up to fail. The Bulls never gave Fred Hoiberg a team to succeed. They never gave him a team that fit his style (making the hire even crazier in retrospect, more on this later). Then when he took a team to the playoffs and did a decent job they blew up the roster (right move) and gave him a team meant to lose. So if we’re being totally honest here no I don’t think Fred Hoiberg is a good NBA Coach but I also will happily say he was never really given a fair chance with this team and stupid Front Office.

Which leads us to the important piece of this. The Bulls Front Office. These fucking guys. 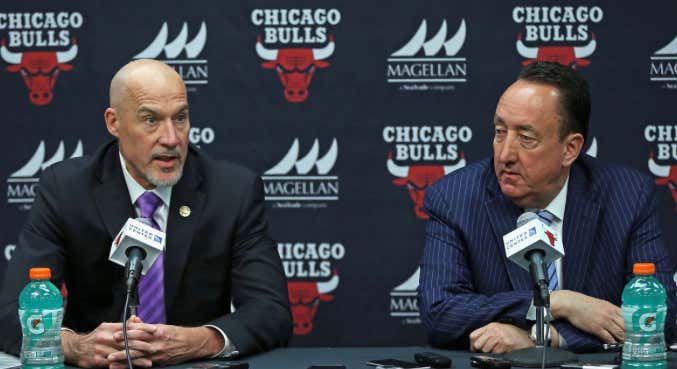 Dumb and Dumber. Dink and Doink. Tweedle dee and tweedle dumb. These are the guys that hired Fred Hoiberg because they were friends with him, then never gave him a chance to succeed. These are the guys that are about to get yet another Head Coach hire. I’m not even going to waste my breath/time on John Paxson, he has a job for life and not accepting that fact is just burning energy getting mad over something we can never ever change. But at least fire Gar Forman. But nope, that won’t happen. You want to know what will happen? Here’s what’s about to happen.

Lauri just got back. Kris Dunn is about to be back. The Bulls are going to get healthier and win a few more games than they’re winning right now and then these two fucking idiots are going to use the propaganda machine to tell everyone that this is actually a Playoff caliber Roster and it was Fred Hoiberg’s fault that the team was “underachieving”. Then they’ll do their year end press conference after the Bulls somehow manage to end up with the 6th pick or some bullshit and say they’re a piece away from opening a championship window. Then they’ll hire another one of their friends and we’ll rinse and repeat on the whole thing. Whatever, it’s all stupid and pointless. Fred Hoiberg wasn’t good but he sure as hell wasn’t the main problem with the Bulls. He’ll be the scapegoat and the machine will keep on running. Wendell Carter Jr was the right pick though, at least we’ve got that.