Every once in a while, someone writes an article like this. It’s usually a glowing commendation of some Instagram account that’s gained acclaim and millions of followers, and I guess it makes some type of sense to be interested in it. I mean, they post all these hilarious memes and have all these followers, how do they do all this stuff themselves? Short answer? They don’t. None of the content you see on accounts like ‘Daquan’ is original or even owned by the people who run them, despite the bullshit being spewed in this article:

Shragai runs IMGN Media, a 3-year-old startup that has been trying to cash in on the world of memes. IMGN is basically a production studio—like HBO, but for memes. They hire teams of “content creators” to write, edit and curate memes, and try to make pages with followings large enough to rival major celebrities.

Maybe they do hire teams to create memes, but considering 80% of content on these accounts (Daquan, FuckJerry, Beige Cardigan, et al) is lifted directly off of Twitter, I’d guess most of those resources are put toward the ‘curating’ aspect. In this instance, curating is just a nice word for ‘stealing’. While Twitter has its own issues with plagiarism (check out KB’s blog about it), it’s nothing compared to what’s happening on Instagram. Where Twitter users are typically not cashing in, Instagram meme accounts like Shragai’s are making hundreds of thousands off tweets created by users such as myself who are not seeing a cent of that profit. However, some of the bigger accounts on Twitter are pushing back on the article for being complete bullshit.

The level of self-delusion it must take to think you’re doing anything interesting when every single thing you post comes from someone else’s brain is scary to think about. At least when we post viral videos on the Barstool accounts those are things people have submitted to us with the expressed desire to have those things posted. And on the occasion that there’s a video that someone doesn’t want up, we take it down. Asking one of these Instagram meme accounts to take down a tweet typically falls on deaf ears. Maybe they’ll give credit, but I promise that credit doesn’t mean much– typically, if a meme account posts me I’m going to gain maybe 5-10 followers, if even. Daquan isn’t as bad as some of the rest, because it does have some original content (or maybe it isn’t original, who knows) that doesn’t come from twitter. But look how ridiculous Beige Cardigan is, for example: 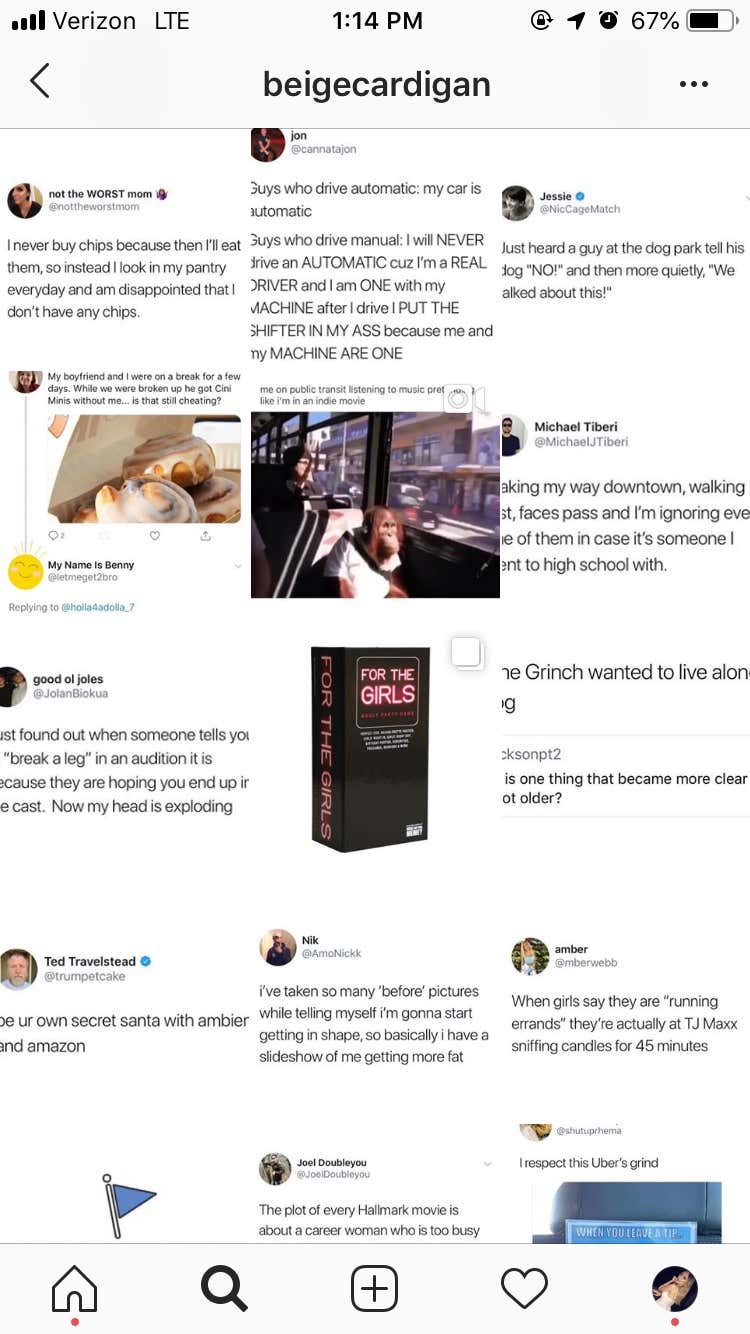 It’s irresponsible of the Daily Beast to post this article when even the slightest bit of digging would have shown them how full of shit this guy they’ve interviewed is. But that seems to be a theme, no? All I’m saying is it’s mind-blowing that they’ll post a ‘takedown’ of Barstool Sports, a place that actively facilitates creativity, but write a glowing commendation of a criminal who profits off the creativity of others. Interesting.