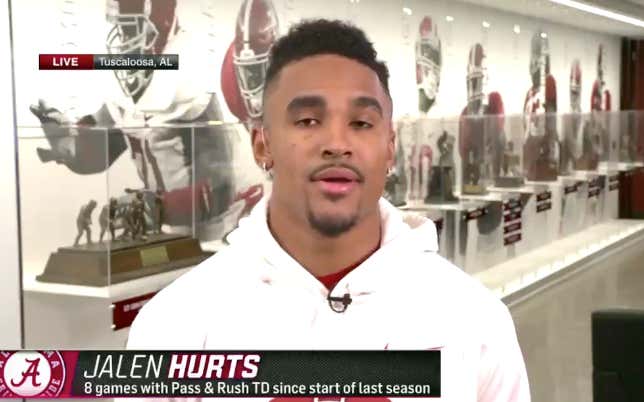 I’m sure you know the story. Jalen Hurts, 25-2 as a starter at Alabama, was benched for Tua Tagovailoa in the 2nd half of the 2017 national championship against Georgia. Tua went on to throw the winning pass and then had a historic 2018 season while Jalen watched from the bench, still in an Alabama jersey. Jalen never really opened up about that night until yesterday:

“After the national championship game I’m in the hotel room with my family, and I’m in mom and dad’s arms crying asking, ‘What are we going to do now?’ “My dad looked at me and said, ‘We’re going to fight.'”

Jalen, of course, led a comeback in the same building he was benched in against the same team he faced while benched on Saturday:

That interview with Jalen above is about as raw as it gets. I can only imagine the emotions he was feeling. The team he led to the national championship ended up on top of the college football world while he watched from the bench, not because he was injured, but because he was benched for a better player. You are happy for your teammates, but you are thinking about yourself, your future. That’s human nature. 99% of the people reading this would feel the exact same way. You can have an opinion like this:

But let’s not remember how Jalen handled himself on the field right after the moment Alabama beat Georgia in OT:

He then stayed at Alabama when he could’ve transferred. Yes, he graduates in December and knew he could transfer and play right away in 2019, but not everybody would’ve done what Jalen did. He could’ve moped around and been a bad teammate. He didn’t do that. He worked to become better and he did. These stats were mostly late in games, but take a look at the increase in YPA and completion percentage:

You could see how much he means to Nick Saban in the postgame press conference:

I don’t know Jalen personally. He could be a massive asshole, but I doubt it. Sports are awesome sometimes because of stories like his. You could script this as a cheesy sports movie from the ’80s, but somehow in real life it was perfect.

Keep your head up, ya’ll.