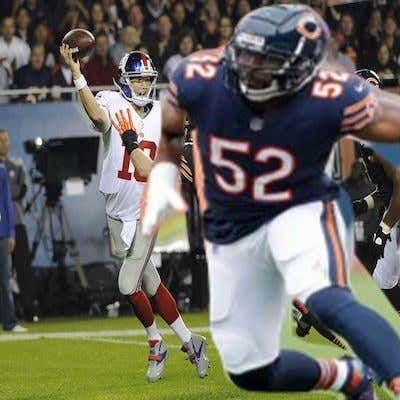 Crazy that one week you are talking yourself into an unlikely run at a division title and the next you are preparing to write an obituary for your quarterback. But that’s how fast things can change in the NATIONAL. FOOTBALL. LEAGUE.

In all seriousness, it’s been so much nicer watching the Giants actually put up points the last 3 weeks. Or at least before Pat Shurmur restarted the tank in the 2nd half of the Eagles game. But the Bears defense is a completely different monster than the defenses of the 49ers, Bucs, and Eagles. Something tells me that the Giants offense will resemble the first couple months of unwatchable football from the season. The Bears starting backup Chase Daniel yet again gives Big Blue some hope. But the Bears seem more than fine relying on their defense to carry the team and hoping the offense can make a few big plays so they can walk into next week’s matchup against the Rams with a healthy Mitch Trubisky and a couple wins against shit opponents. And based on the way the Giants defense has looked in big spots, that’s not a bad strategy at all. A sincere shout out to the fans that braved the shitty weather to watch this game. Hopefully you ate, drank, and were merry at the tailgate, Saquon gives you a few HOLY SHIT moments, and tomorrow’s hangover won’t be crippling.

Speaking of crippling, if Eli gets crippled by Khalil Mack or even if he doesn’t, it sounds like Kyle Lauletta may get some snaps in at center for the GMen.

Don’t get me wrong, I don’t hope Khalil Mack snaps Eli over his leg like Bane did Batman. I’ve grown to love that big doofy son of a bitch for the great memories he has given me. But I can’t think of a better punishment for Lauletta giving the Giants franchise yet another black eye by living that GTA life a few weeks ago than making your pro debut against this Bears defense behind this Giants offensive line. So whether Eli gets knocked out of the game or not, I hope we see Lauletta get some burn today.

Prediction: I already can’t wait for this game to be over and we still have almost an hour until kickoff.