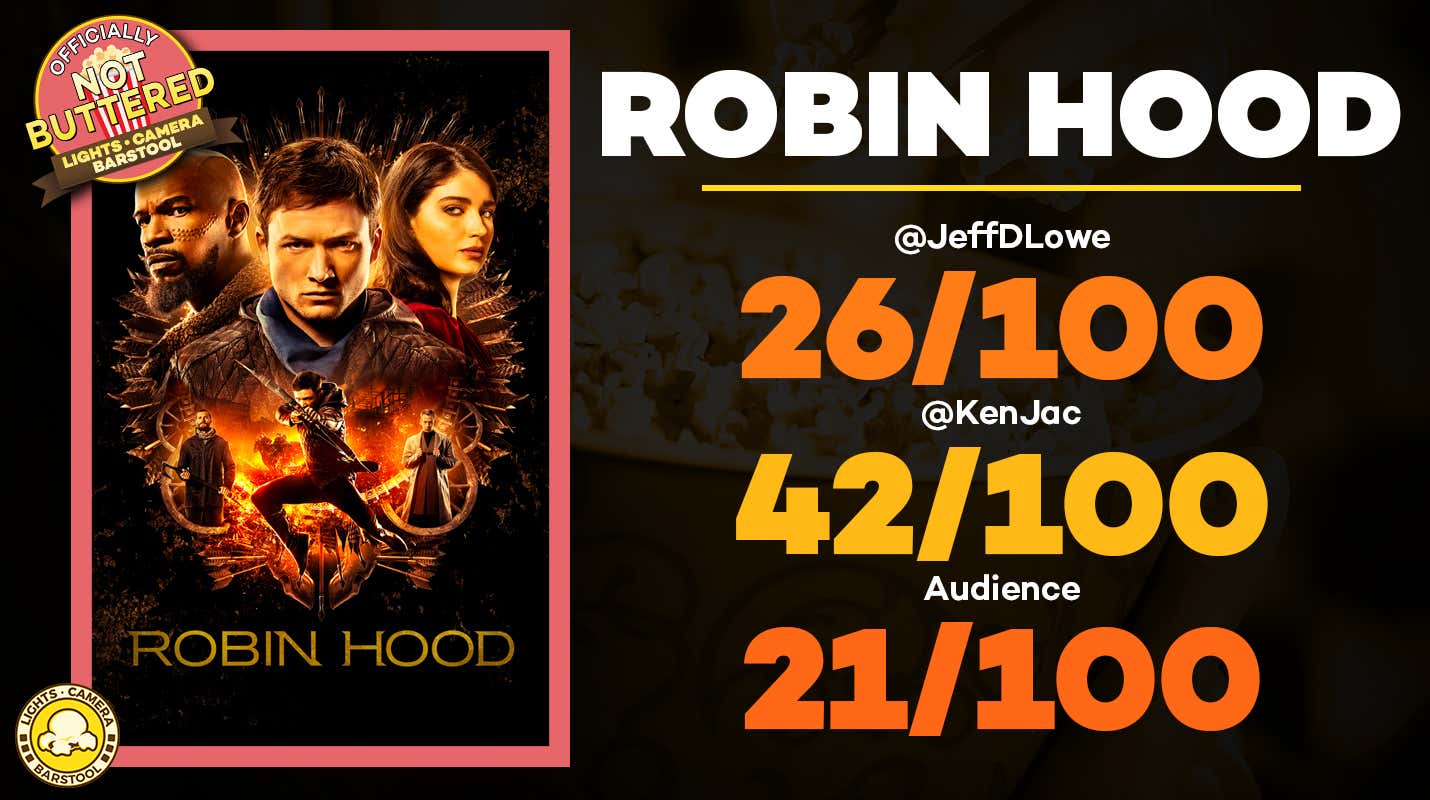 We saw ‘Robin Hood’ so you don’t have to… you’re welcome.

Jeff Lowe (26/100): The new, futuristic take on ‘Robin Hood’ is strange, dull, boring and easily one of the worst blockbuster releases in 2018. Why they continue making these movies about “public domain” old legendary figures (see 2017’s ‘King Arthur: Legend of the Sword’) is completely beyond me.

Jeff Lowe (26/100): I wasn’t very into the idea of a “futuristic” take on Robin Hood, a story that has been told numerous times over the years. Despite my doubts, the trio of Taaron Egerton, Jamie Foxx, and Ben Mendelsohn intrigued me enough to give it a chance. What we ended up getting is a movie that misses the mark in every single category. I know people are sick of comic book movies, but these “public domain” legend stories are the real issue. For a $100 million budget, this movie is a complete mess.

There’s a trickle-down effect for why this movie doesn’t work. It starts with the concept, then the story, then the script, then the acting and finally the look of the movie. None of the acting in this movie is any good and I completely blame a weird and bland script. When I wasn’t laughing at serious dialogue, I was just bored out of my mind. This movie also looks ridiculous as well. They never really establish when this takes place in terms of time period, so the visuals are confusing and off-putting at times. Who was asking to see Robin Hood in a Nike tech fleece (credit to Trillballins for the joke)?

My biggest issue with this movie, without question, is the disservice to Ben Mendelsohn with the character and script he has to work with. He has been aggressively type-cast as a villain as of late and it’s a shame because I think he has far more range than that. The lines for Ben Mendelsohn’s character in ‘Robin Hood’, the Sheriff of Nottingham, seem like they were recycled cutting-room floor lines from his roles in ‘The Dark Knight Rises’, ‘Rogue One: A Star Wars Story’ and ‘Ready Player One’. Please stop giving Mendo corny ass villains to play in movies… please.

Oh boy, what a movie. It isn’t the worst overall movie of 2018, but it is firmly in the bottom fourth of movies released this year. I’ve said all I need to say.

KenJac (42/100): I’m firmly against the camp of people that think all remakes or rehashes are dumb, and this movie served as a huge win for those haters and losers. It never felt like there was a cohesive vision for what they were trying to do outside of a slight twist at the end. Everything else felt like it was improved around that moment, and my poor handsome boy Taron Egerton put up his third dud of the year that was not his fault whatsoever.

The acting was all totally fine from the principal actors in Egerton, Jamie Foxx, Jamie Dornan and an awesome smaller role for Paul Anderson (Arthur Shelby from ‘Peaky Blinders’). Ben Mendelsohn was literally just his character from ‘Ready Player One’. I think part of the problem with him being typecast as a villain is that there are only so many different ways you can portray evil, and this was the first movie where I was unimpressed by him. Eve Hewson and Steve Minchin were also impressive considering how important their characters were to the story.

The way this movie turned out makes me feel like there was a tremendous battle between the editors, director, creative director, and producers. The theme was just all over the place, highlighted by the fact that they had modern looks and feels to a movie that’s supposed to be set in the middle ages. The Crusades is replaced by Robin basically doing a scene out of ‘The Hurt Locker’ where he and other archers are wearing bulletproof vests and doing an urban sweep of a Middle Eastern city. Bows are replaced by semi-automatic crossbows and mounted turrets with magazine cartridges and shit. Everyone has stitched clothing, and the Sheriff of Nottingham basically wears a 3 piece suit. What I’ll give to the movie is that it delivers plenty of action between very hollow feeling exposition, which is more than I can say for a recent counterpart ‘King Arthur: The Legend of the Sword’.

There is plenty of great movies coming out this time of year, and this is just not one of them. It’s not a bad turn-off-your-brain action movie, though, and there is plenty of value in that fact.

—
This movie is Officially Note Buttered and we will review it, and reveal Trillballins’ score, on next Thursday’s Lights, Camera, Barstool. Remember to rate all 2018 movies below.